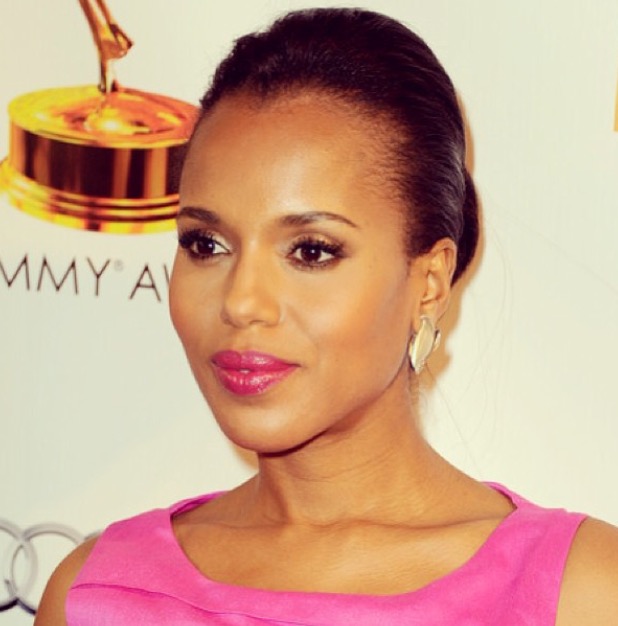 Kerry Washington was born in the Bronx, New York to Valerie, a Professor and Educational

Consultant and Earl Washington, a Real Estate Broker.  Her mother is of Jamaican heritage and reportedly related to Colin Powell.  Kerry attended a prestigious private school in Manhattan in her formative years while performing with the TADA! Youth Theater teen group. She then elected to attend George Washington University in spite of her Ivy League prospects and graduated Phi Beta Kappa in 1998.

At GWU, Miss Washington designed her own major called Performance Studies to allow for examination into the role performing arts played in the community.

Soon after graduation, Washington starred in her first feature film, “Our Song”.She steadily worked over the next few years, garnering praise for her standout performances.  She came to the world’s attention with her luminous portrayal of Ray Charles’ wife, Della Bea Robinson in “Ray”. She is now an acclaimed actress, who is dominating television screens in her role as Olivia Pope on Fox’s sensational TV series, “Scandal”. Kerry continues to garner critical acclaim for her performances.

She played the lead actress role of Kay Amin in the “Last King of Scotland” and Broomhilda von Schaft in “Django Unchained”.  To date she has received two NAACP image awards and was nominated for an Emmy, Screen Actors Guild, and Golden Globe for her current lead role in a dramatic series.

In 2013, Miss Washington was awarded an honorary doctorate degree from her alma mater, George Washington University. Her natural grace and beauty ranked as #2 on People’s 100 most beautiful people in 2013 and made her a perfect representative for cosmetic lines; L’Oréal and Neutrogena. She has now turned her attention to increasing advocacy. She was awarded the GLAAD Vanguard award in 2015 for speaking out for gay rights. She is also a member of V-Day, a global movement bringing awareness to issues of violence against women and girls.

Contributed by the Institute of Caribbean Studies  (Compiled from various sources)