GraceKennedy Group Ceo Receives The Key To The City Of Miramar, Florida - Jamaicans.com 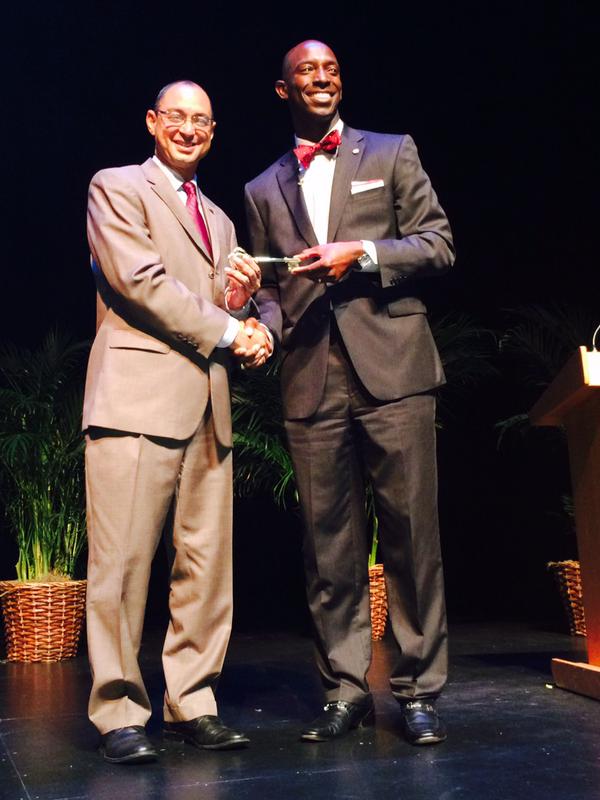 Kingston, Jamaica – On Friday, May 8, GraceKennedy Group CEO, Don Wehby, became the proud recipient of the key to the city of Miramar, Florida, presented to him by Miramar’s Mayor, Wayne Messam. The occasion was the last of three town hall forums being held by GraceKennedy, through its Money Services arm, GKMS, and partners of 25 years, Western Union.  The forums were staged in the United States and Canada from May 4 to 8.

The event, held at the Miramar Cultural Centre, saw approximately one thousand Jamaicans and Caribbean nationals coming out for an evening of dialogue with GraceKennedy. There were presentations from Mr Wehby, Sean Mason, General Manager of Western Union, Caribbean, and a keynote address from former Prime Minister, PJ Patterson on the theme, “Caribbean Diaspora: Borderless Possibilities”. At the end of the proceedings, Mayor Wayne Messam, who is of Jamaican parentage, made the presentation to Mr Wehby.

The ‘key to the city’ is an honour bestowed by a city upon esteemed residents and visitors. In presenting the token to the Group CEO, Mayor Messam lauded the Group CEO on his work in the private sector, as well as his two year stint in government, and his overall contribution to Jamaica. He further congratulated Mr Wehby on his leadership of GraceKennedy, and on the growth of the business in the United States and across the world, the company’s social corporate responsibility, and the popularity of the Grace products in Florida in general. A surprised, but gracious Wehby, thanked the mayor for the award.

Mr Wehby was also presented with an honour from State Representative, Hazelee Rogers, as well as an award from Eddy Edwards, the gentleman responsible for the very successful Grace Jamaican Jerk Festivals held annually in the United States.