Room for Rosa - Memoirs of An Illegal Alien Part 111 - Jamaicans.com 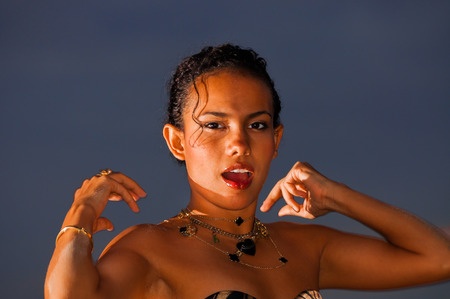 My plan was working just like I wanted it to. The boyfriend, Richard, was getting jealous and Nicola was confiding more and more in me. In fact I was ready to put the second part of my plan into play. I would bring an imaginary girl “I like” into the picture. My hope was that it would cause her to have some mixed “jealous” feelings. I would ask her for help on wooing this “girl”. I may even suggest a double date which would have her boyfriend thinking things are safe. I would then cancel at the last minute being that this girl did not exist.

Rosa called out of the blue (well so I thought) She was coming to Miami for the weekend for a friend’s wedding.

“I know this is weird but, can I stay with you for the weekend?” she asked.

I thought to myself. Why would she want to stay with me. She is a doctor and has money. Then I remembered she was strapped with student loans and always looking to save money. My mom told me that she made a few financial mistakes and was trying to recover.

“I could stay in the extra room you have in the house. I will be out of your way for the weekend as there is a lot planned” All she has to say was my mother suggested she ask me. They still communicated.

“What does Alberto think about it?” I asked as Alberto must be suspicious of his girlfriend staying at her ex-boyfriend’s home.

“He is fine with it. He has rounds on the floor all weekend that is why he is not coming.”

“Do you think I am going to jump you?” she said jokingly.

That struck the ego nerve. She thinks I am still attracted to her and don’t have the will power.

“Sure” you can stay here.

Rosa arrived the Friday evening. I got a big hug and cheek kiss. She smelled good.

I had to admit She looked better than when we were together. She was in tight jeans, sneakers and a tight blouse. She had a travel bag and a bag with her bridesmaid dress. She had rented a car and drove into town. I showed her the room and gave her the extra set of keys. She was rushing off to a rehearsal but had enough time to explain to me that she and her fiancé had a room. Being that he was not coming They gave up their room to a family member who was coming in from the Dominican Republic. I believe the explanation was her way to provide me details on why she chose to stay at my house. I told her I was happy I could help. She then left.

I had my own plans. Steven and I were hitting a club on South Beach. Since I had become an assistant manager we have not gone out clubbing. Plus we both just went in different directions. I was seen as the “enemy” being in management, so we never really interacted as friends at work. We were on different shifts. Also, he had found love and I was supposed to get married.

Getting to South Beach on Friday night is a major hassle. Steven and I were able to catch up on our lives. We reminisced about the old days when we were the 2 musketeers hitting the clubs, and women to conquer. Times had changed. He had been having an on and off relationship with Jadah who still lived in Atlanta. She was pregnant and he was thinking of moving there. It sounded like Steven was finally tamed. I had seen it before, but he would become untamed again. He quickly mentioned that he did not want to marry her.

That night he was out to prove that he still had it. He flirted with a few women. I left him that night in South Beach as he was engrossed in a conversation with a young lady from out of town. She was staying at a hotel on South Beach. I figured he spent the night at her place.

I enjoyed the music but nothing else. I was not into one night stands and hook-ups. Maybe it was my past experiences with women. Just did not need the hassle. I left South Beach early and went home to sleep.

On Saturday morning, I called Nicola.

It was time to execute my plan. I started to tell her about a girl I was interested in and asked her for advice.

I know this is weird but I met this girl and I like her. I need some help on how to approach her.

Nicola started to ask questions that I expected, but I was not prepared to answer.

I did not plan on giving a description but should have known that questions would come up. Humans typical ask the question “is the person better looking than me?”

I drew blank at first. Then and idea came to my mind. I started to describe Rosa. She was the imaginary girl. It flowed off my lips smoothly.

Then she asked a question that confirmed that my plan was working.

“So are you going to take her to that place you took me?” she said jokingly. That special night that I had planned with her that never happened. I had stopped at a boardwalk by the beach where we spoke.

No, I replied “you are the only one I ever took there.”

“I was just joking with you. You can take her there. It was nice and I know she will find it romantic.

She may have said it jokingly but I knew there was a hint of jealousy. People tend to express themselves using jokes to hide their true feelings.

I pressed. I wanted her to feel special.

That is a special place for me and you. I knew I hit a nerve.

Thank you, that is (she paused) I have to go study now. She abruptly ended the call.

It was a moment that defined how my plan was going. She was about to breakdown the wall and let me know how she felt about the special place.

Was I awake or asleep. I was being kissed all over my body. It has to be a dream I thought to myself. Before I could make sense of what was happening I was so aroused I was making love to this “shadowy” woman. I fell asleep right after.

I opened my eyes slowly. Something felt different. I was spooning a naked womans body. The woman was sleeping but the body seemed familiar. As I scanned her body I saw a mole on her shoulder. I recognized the mole. I always thought it was sexy. It was Rosa. My dream was not a dream but a reality.

I pulled my arm from under her body. She turn facing me still sleeping. She has a look of satisfaction on her face.

Should I wake her up. I glanced at the clock on the night table. It was 11:45 am. Rosa had mentioned she wanted to leave South Florida to drive back to Orlando. I could get off the bed and flush the toilet. Maybe that would wake her up.

I slowly tried to roll off the bed while looking at Rosa’s face. I wanted to be sure I did not disturb her.

It did not work. She opened her eyes and stared at me. She knew what happened.

“Good morning”, I said trying to break the ice in this awkward moment.

Rosa, did not respond.

She quickly grabbed the sheets, covered herself, left the room and closed the door behind her. She did not say a word.

I got off the bed and went to the bathroom. Rosa’s bridesmaid dress was on the floor.

I was not sure what to do. I went into the shower.

Then I heard a gentle knock on the door.

The first thought that crossed my mind was a question, “was she back for more?”. Even though the situation was awkward it felt good get some “oil of my back”.

I wrapped a towel tightly around my waist and went to the door.

I opened the door. Rosa was dressed and looked like she was ready to go.

I need the dress I left in here.

It’s over there. I pointed to the dress on the other side of the room.

She walked by me to get it.

I was tired of awkwardness.

“What happened last night.” I asked as she went to retrieve the dress. She did not answer.

I blocked her path.

She attempted to push me out the way and I held her hands. The towel fell from around my waist. Before I knew what happened we were back on the bed making love again.