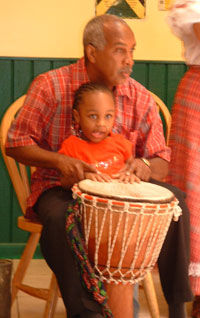 This month we interview Ms. Norma Darby of the Jamaica Folk Review. Ms. Norma Darby leads this well known Florida-based folkloric group that has been performing for over 30 years. They use Jamaica folklore to entertain and educate about the Jamaican culture. We talk to Ms Darby about her passion for Jamaican culture, Miss Lou and how do we pass on our culture to the next generation.

Questions: When was the Jamaica Folk Revue founded?

Answer: We founded the group in 1975. We were known as the “Singing Group”- the cultural arm- of the Jamaica Association of Florida. When the organization became defunct in 1978, the Group stayed together and continued as the Jamaica Folk Revue.

Question: What were your main goals for starting the group?

Answer: To showcase our rich Jamaican culture. In the early 1970’s the Jamaica Association of Florida participated in the Mimi International Folk Festival , which was a major annual event held at the Bayfront Auditorium (now Bayside) in Miami. I remember seeing Jewish, Hispanic and other cultural groups being on display. They displayed their food, their songs and dances. I thought that we had a culture that needed to be shared and it was then that my “love affair” (magnificent obsession) began in earnest. I went through a period of study, reading everything from Walter Jekyll and Olive Senior to Philip Sherlock, Rex Nettleford , the late great Louise Bennett-Coverley and other Jamaica n folk contemporaries, to learn more about our culture. (You must remember that I was a product of the early pre-independence Jamaica, where the only culture that was taught or was acceptable, was that of our British colonizers.) Thank God and much blessing to Miss Lou, who had the courage and dared to be different . And as for the music! I can only say with deep reverence, that our folk music, the music of our African ancestors, can stand side by side with any of the great “folk” operas of Europe. And for that I give thanks to Olive Lewin, Marjorie Whylie and other great Jamaican musicologists, who painstakingly unearthed and made this beautiful music available to us. (Incidentally, for two consecutive years, our Art & Craft display, won first prize at the Folk Festival -1976&1977)

Question: Do you think you have met the main goals when you started over 30 years ago?

Answer: Yes and No. I think we met the goal to bring Jamaica n culture to an American audience. They were awed and absorbed by what we had to offer. Our goal now is to educate our own Jamaicans.

We Jamaicans have taken our heritage and culture for granted. Remember “Sankofa”- Know where you are coming from, so you can recognize who you are, and where you are going. We all need our “Groundation” and so our performances are geared toward educating our audiences. “Educating through entertainment”. We solicit audience participation -especially from children – when we do stories, ring games, and proverbs. (And it’s amazing how much we find that we have in common, with our “neighbours” in this multicultural society.-. cultural commonalities” (Incidentally we were asked to participate in the first and subsequent “Calle Oche” festivals

Question: Where was your first performance?

Answer: Our first performance was at a Miss Lou benefit. The three Jamaican associations that were in South Florida at the time, held a Fundraiser in North Miami .to. Our second performance was at the “ Around the World Fair” at Tropical Park in Miami .

Question: What was the audience like at the first performance?

Answer: It was a mostly a Jamaican audience.

Questions: Was the performance well received?

Answer: They loved it. Remember it was Miss Lou and we were the supporting cast.

Questions: How did Miss Lou influence the group?

Answer: Miss Lou is a National Hero to us. She has influenced everyone in so many ways – national and personal pride and values . Some of our group members had been privileged to perform with her on Ring Ding, in pantomimes and other shows. (I didn’t have that “first-hand” relationship, but that has in no way lessened the influence she has had on me.) This month we are honoring her with our second annual Miss Lou Scholarship Fundraiser & Memorial Celebration ,on September 7th 2007 , at the Sierra Norwood Calvary Baptist Church, in Miami Gardens.

Questions: Do you worry about the future of “ole time” Jamaican culture and the way it is celebrated?

Answer: Absolutely. People believe our culture is entertaining but they do not know the history behind many of the songs, expressions and dance. For example when we do the dinki mini dance we also explain the origins and the meaning of the dance. What and why it was done. Songs like the “buggy bruk” is a direct reference to slavery. Many of the songs are metaphors. During slavery, many songs were sung to show courage and indifference, to the whips that were used to try to break our bodies ;but could not break our spirits. Breda Anancy was also a scapegoat and hero to the slaves in Jamaica . He would “absorb” their suffering,by transference If a slave got whipped ,the blame and punishment would be transferred to “Breda Anancy” (Today the phrase “Is Anancy meck it” is on the tongues of most Jamaicans). He was the hero who often overcame , by trickery.

Questions: Do you actively recruit young members to the group or do you have a youth group?

Answer: Yes we work mostly with church youth groups (I tried to get a school in Broward county to participate in a Cultural Enrichment program and am still working at it.) Currently, one of our members, Mrs. Jennifer Grant, who is a teacher, has trained a group of young people to perform in the Jamaican tradition.. They will be a part of the “Miss Lou” Celebration, next week – an’ dem good yu see.

Questions: You have performed for many different audiences through the 30 years. What are some of the memorable comments you have received from people in the audience?

Answer: I remember a performance where a Jamaica n lady in her late 70’s came up to me and said, with tears in her eyes -. “Miss, I thank you so much. All dese years, I nevah know the true meaning of our culture”. There was another time when a gentleman came up to me and said “Thank you Ms Lou’. He thought I was Ms Lou. (Laugh)

Questions: What was your proudest performance?

Answer: There are 2 performances I am especially proud of.- The first was at Viscaya Museum when we had the. honor of performing for Miss Lou and she said to me “Norma mi chile, I am proud of what you are doing here. ‘Try kip up de culture’” In 1980, we were asked by Channel 2, to do a TV program on Jamaica. The late Gloria Lannaman wrote a script, and to my great delight, the docu-drama, which outlined Jamaica’s history in song and dance, found its way into schoolrooms across the country.

We also did a performance at a retirement home. The seniors danced and sang with us, as they reminisced. They did not want us to leave and the smiles on their faces were unforgettable.

Questions: What are some of the tips you would give parents of Jamaican heritage to keep the Jamaican culture alive in their homes?

Answer: Read Jamaican books to your children, sing the songs, teach them the proverbs and our folkways. Tell them about your culture which is much more than Dancehall- Our culture is one of Grandy Nanny and other strong women, of the slaves who survived the Middle Passage, to leave us their legacy of music, cuisine, “bush medicine”, to cure any ailment, Dukunoo and Kumina, of the Asians and Europeans who brought their special flavour and added further dimension . I like Bob Marley because he spoke to and for the people and never denied our culture. He was a negus ,who fearlessly addressed, through his music, every social problem .

Questions: Thanks for the interview. Do you have any final thoughts for the Jamaicans.com audience?

Answer: The only thing I would like to add is, do not take our culture lightly. It is the legacy of our forefathers, on which our Nation was built and which has made us a strong “people” who stand out in any society.

Thank you for the interview and for the opportunity in expressing my views on our Culture.