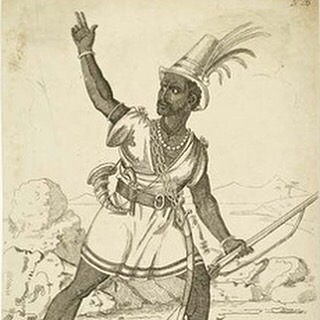 Jamaica National Trust Commission erected a monument to the memory of Jack Mansong, a man who was known as a Robin Hood-type character, but who also inspired fear among the colonial powers. Among Mansong’s activities was robbing the male occupants of carriages, but leaving the women and children alone. Uncertainty surrounds his origins, but his life was source material for many books and theatrical presentations. It is believed that Mansong was a slave and a guerilla fighter named “Three-Finger Jack.” He was active in Jamaica from about 1780 to 1781. According to the historical market installed in 1978, Jack was “strong, brave, skilled with a machete or musket” and his exploits “were equaled only by his chivalry.” Books about him were bestsellers in Britain, and he was called “the terror of Jamaica.” There is considerable doubt about everything associated with Mansong, even his name, although since he was a slave, it is certain he was of African ancestry. It is said he escaped from a plantation in St. Mary and that he was originally from Gambia. Legend has it he was a “giant” who stood nearly seven feet tall. He was called Three-Finger Jack after losing two fingers in a fight with Quashie, a Maroon ultimately credited with killing him. He was feared as much for being a strong fighter as for his obeah, and after his death his enemies decapitated him, put his head on a pole, and carried it to Morant Bay and then to Spanish Town to collect a reward of £300.