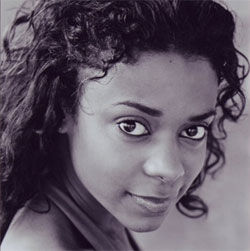 This month we interview Muna Heaven who appeared on NBC Television’s The Apprentice this past season. Although Muna did not win, she showcased Jamaica & Jamaicans and made us proud. Her confidence, positive outlook and strong Christian beliefs was an inspiration to many viewers worldwide. Muna has studied abroad in France, Spain and Belgium, and speaks fluently in English, Spanish and French. She holds a law degree and currently works for a New York agency that litigates family law matters. Muna is orginally from Mandeville, Jamaica.

Q: Tell us how you found yourself on The Apprentice? Was it something you always wanted to do?
– I ended up on The Apprentice just how the chicken got to the other side of the road, I simply crossed the street. At the time of the first audition, I was at the low point of my career working as a temp across the street from Trump Tower. The morning of the open call, I simply went over to Mr. Trump’s building and joined the line like everyone else. I waited for about an hour. As it became close to the start time a lot of nervous energy began to build. People laid eyes on all the cameras and the newscasters and then Trump himself. I said as little as possible while waiting, thinking it better to observe. However, when it was time to audition, I prayed for God’s peace and guidance and that was it. I was overcome with excitement and just ready for any question that was to come my way. The best was when they asked me to introduce myself. I was one of three black people in my group and of course, the only Jamaican. I tell you, I could not have been more ready to deliver. I was only too happy to let them know my name and where I was from: “…the island of Jamaica, home to Bob Marley and many more!”

Q: When you entered the competition did you think you’d be chosen as one of the contestants? Why do you think you were chosen?
– I knew that entering the competition meant vying for a difficult position to obtain, so my focus really was to just shine. The competition was so fierce though, so much that after the first interview I wasn’t sure if I had made it to the next round. What I was sure of though was that I had put my absolute best foot forward, and I was satisfied with that.

– Casting is a mystery unto itself, so I do not know why they chose me – but I sure am happy they did! I am even more so humbled by the opportunity than anything else.

Q: Do you think you could use some of the lessons learned on The Apprentice on another reality show like Survivor?
– Nothing beats experience. If I were to enter another reality TV competition, I would definitely use some of the tactics I developed on The Apprentice. However, I think one is my limit, so I’ll have to apply lessons learned on the show in another context.

Q: Did you have Jamaican food in the Trump suite where you stayed?
– No. There was no Jamaican food in the mansion. However, I had the feeling that if I had requested some curry chicken and white rice, production would have found a way to get it since part of the reward for winning was to have any food/beverage you wanted. I didn’t want to be overly demanding though. I figured, I would have enough red peas soup and cow foot waiting for me once I got home.

Q: Some argue that it was your Jamaican accent in the commercial that got you fired. Other say you were “set up” to do the commercial, and that got you fired. What’s your response?
– My response to the webisode fiasco is the following: What you didn’t see was the time restrictions we were given. What we had recorded exceeded the required time limit and so we had to fast forward the taping. Unfortunately, it didn’t come across as planned. Oh well! We learned that one the hard way, but such is life sometimes.

Q: How shocked were you when you were fired? Do you think it was in any way deserved?
– I’ll never forget how I felt as I was being fired. Mr. Trump was wearing a yellow tie and I thought to myself, “it’s happening, it’s happening, I’m being fired.” That lasted for about five seconds, then I regained my composure, reminded myself to say “thank you” graciously and that was it. I also thought it appropriate so say good-bye to the team although they had just thrown me under the bus, I thought it established that despite the rocky boardroom, my character was still in tact – you should never allow anyone to rock that.

For all the heart and energy that each of The Apprentice contestants put into each task, I don’t think any of us necessarily deserve to be fired. However, it’s the nature of the beast and when it’s your time, it’s your time. Personally, I was very satisfied when I watched my boardroom – I fought the best fight I could.

Q: What do you think you could have done differently to avoid the firing?
– I could have sold myself out and hit the girls below the belt. There are many secrets on the editing floor but I wasn’t prepared to do that. I had made up my mind before entering the boardroom that no matter what, I wouldn’t do anything to disgrace my parents or Jamaica – full stop. I played my hand the best I could and so even though no-one goes into the boardroom to be fired, I could not have asked for a better exit.

Q: Any regrets?
-None – apart from the fact that I would have liked to have been project manager before leaving.

Q: Was it difficult or easy being an observant on the show?
– Easy. I am proud to be observant of the Almighty God. I looked to God to get me on the show, so looking to Him to maintain my standards and ethics during the show was no different. I still look to Him everyday to get me through my tough days in Manhattan Family Court.

Q: As we know the winner emerged from the Arrow team. What were weaknesses in the Kinetic team?
– Kinetic lacked the insight to work together to the end and then let the chips fall where they may. Instead the team sought to self-destruct from the start ruthlessly ganging up on one person each week.

Q: What are your thoughts on the winner, Stefani Schaeffer?
– Stefi is really some kind of wonderful. She is an outstanding individual in every way. I was rooting for her and I am so very happy that she won.

Q: Which contestant you most admire? Do you keep in touch with any of the contestants and do you consider any of them friends?
– Friendship is a very serious term that I don’t think is developed overnight. The people who have looked out for me the most are Marisa, Derick and Stefani – they are friends that I do hope to keep.

Q: You have a strong faith in God. How did that affect you on the show? Were you allowed your religious freedoms? Did this intimidate any of the contestants?
– My faith in God is what got me on and through the show. It gave me the strength to fight back without losing my cool (too much). When in need, all I have to do call 911 – Psalm 91(1) – and you’re good to go! No member of production or the cast ever made any mention to me about my faith.

Q: Based on the scenes we saw your team seemed to be a lot more serious and less fun than the Arrow team. Was that a true reflection of the team or was it just the footage that we saw?
-I liked to refer to Arrow as a big frat party that never ended. Kinetic was certainly in essence far more serious, organized and collected, what we lacked was any sense of loyalty and you see how far that got us.

Q: What lessons have you learned from the show?
-That with faith, anything, and I really do mean ANYTHING is possible. Sometime I still cannot believe that someone coming from our little Mandeville, Jamaica could end up on such a show – but you know what we say to that: “wi might likkle, but wi talawah.” Also, that you should never make a decision based on fear – you are far more capable of overcoming challenges than you think you are.

Q: From a 1- 10, with 10 being the highest, how would your rate you experience working with Mr. Trump; the team and the judges?
9.99– Excellent experience overall.

Q: You have inspired Jamaica and Jamaicans worldwide with your integrity, strength, leadership and trust in God. Do you have any plans to use the notoriety you have gained to influence Jamaica and Jamaicans?
– One never knows what the future has in store, but I am optimistic that through humility, discipline and good old fashion hard work, I may be blessed with a bigger and more impacting opportunity. You know the saying, if yuh want good, yuh nose haffi run. Otherwise stated, to he who is given much, much is required.

Q: What can we expect from you in the future? Is there anything notable you might like to tell us about?

– I have a couple projects up my sleeve. The one that I am working on the most now is a book called, A Lily In The Desert. A Lily In The Desert is basically about overcoming challenges associated with the boardrooms of real life. I hope that the book will serve as a reference for young people coming up and comforting source of empathy for adults working hard to get through the rough patches that face us all.

Q: Thanks for the interview. Do you any final message for the Jamaicans.com audience?

– I want to share the fact that I could not be more proud to be Jamaican; that I wish to express my absolute gratitude for everyone who supported me, cheered me on and mostly for those who prayed for me; that sometimes I just need to glance at our flag to be reminded that I am to walk with my head up, back straight, and shoes clean. Thank you Jamaica – I hope I did you proud!