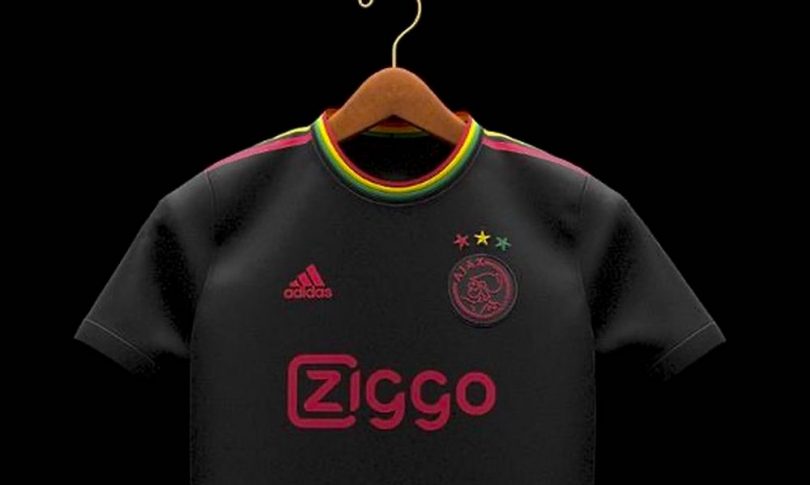 The Dutch professional football team Ajax took Bob Marley’s “Three Little Birds” song as its unofficial anthem in 2008, and the song is played regularly at their matches. The use of the song was recognized by Marley’s son Ky-Mani Marley in 2018 when he traveled to the Netherlands and sang it for fans at the half-time of a game. Now, according to leaked information, Ajax’s third kit for the 2021-2022 season will pay homage to the legendary reggae artist. Although it might seem incongruous for the Amsterdam club to pay tribute to Bob Marley, it has been reported that Marley was an avid football fan and followed AFC Ajax during his lifetime.

Photographs of next season’s Ajax shirt have been leaked and show that the three Adidas stripes around the shoulders will be in the Rastafari colors of red, green, and yellow, and three little birds are displayed on the neck. The colors of the Jamaica’s flag will also appear on the collar of the new shirt, which is chiefly black. Additionally, the three stars featured on the Ajax badge, which indicate that the team has won over 30 league titles, will also be in the colors of red, yellow, and green. The club crest, manufacturers’ logo, and shirt sponsors’ logos on the front of the shirt will be in red.

Football fans of all clubs are hailing the new shirt design and colors, and many say they will buy it as soon as it becomes available. One fan in the United States tweeted that the new Ajax shirt “may be the best soccer jersey I’ve ever seen.” Another Ajax supporter said it could be one of the best-selling kits of all time.

The Dutch team is famous for producing “unbelievable” kits, and as soon as the football kit website Footy Headlines posted the leaked Bob Marley kit for 2021-2022, fans expressed their enthusiasm for it on social media and clamored to know how to buy it.

The Bob Marley kit has not yet been made available for purchase, but fans will be able to buy it once it is released on the official Ajax website. The price of the jersey will be announced at that time. Fans can also check the websites of Adidas and Bob Marley to be informed about when the kit will be available. The Amsterdamsche Football Club Ajax, often simply called Ajax, was founded 121 years ago and is based in Amsterdam. It was named after the legendary ancient Greek hero, Ajax and is the most successful football club in the Netherlands. It plays in the Eredivisie, the top tier of Dutch football, where it has won 35 titles and 20 KNVB Cups. It has historically been considered one of the most successful clubs in the world.