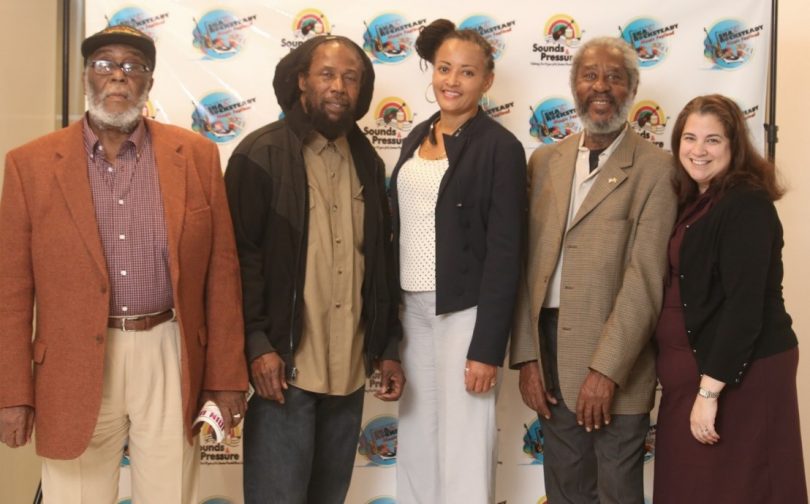 Many turned out at the New York media launch of the 1st Annual One World Ska & Rocksteady Music Festival, to be held at The Ranny Williams Entertainment Centre in Kingston, Jamaica on Saturday and Sunday November 26th and 27th, Thanksgiving weekend.

Representatives of the New York media, and entertainment, industries turned out to hear festival director, Julian “Jingles” Reynolds, CEO of the Sounds & Pressure Foundation in Jamaica, and a director of Fiwi Productions in the U.S.A. the producers of the festival tell how the event evolved from a visit he and his wife made to New Orleans over 20 years ago, to the support gotten from the former and present administrations of the Jamaican government, particularly the ministries of tourism. “The festival forms a core strategy for the redevelopment of Kingston as a cultural tourism destination,” Reynolds said.

In his remarks to the gathering, Fritz-Earl McLymont managing partner of McLymont Kunda & Company and managing director of NMBC Global, a leading business organization in the U.S.A. which serves the minority business communities said; “According to the African Development Bank the African middle class is expected to reach 1.1 billion by 2060, and the McKinsey Global Institute expects consumer spending to hit $1.4billion as soon as 2020. With half the population under 25 and among the world’s largest users of digital media, and a growing appetite for Caribbean culture, especially Jamaican music, we cannot ignore this opportunity. This is the reason African media representatives are here at the launch.

Fans of great Jamaican music from Jamaica and around the world are expected in large numbers at the festival, to be entertained by some of the leading exponents of Ska and Rocksteady music led by the iconic Toots & the Maytals, The Skatalites originators of Ska, Soweto Ska Band, one of the leading European Ska bands from Spain, the unmatchable Marcia Griffiths formerly of the I Threes, Leroy “Heptones” Sibbles, B.B. Seaton and the Gaylads, U Roy, the “Daddy” of the Jamaican DJs, Derrick Morgan the King of Ska, the inimitable Stranjah Cole, Lloyd Parks and We the People, the leading dance and backing band in Jamaica, Brooklyn Attractors, a scintillating Ska band from the U.S.A., Sparrow Martin and Skasonic, Yard Beat, Earth Cry, the Alpha Boys School Band from the institution that taught many of the great Jamaican musicians, and surprise guests.  Sound system selectors Dexter Campbell, the Ska Professor, and Roy Black of the Saturday Night Alternative will spin dance music throughout. The performances begin at 3 P.M and go until 3 AM Sunday morning.

There will be two tours, one Saturday morning, from 11 A.M. to 1:30 P.M., to
Culcha Yard in Trench Town, that gave the world Bob Marley and the
Wailers, and on Sunday afternoon beginning at 1:30 PM to 3:30 PM is the Downtown Kingston Reggae Music Heritage Sites, that showcase 16 historical places in downtown Kingston, such as Foresters Hall, the mecca of Jamaican dancehalls, Big Yard, the home of Reggae Crown Prince, Dennis Brown, Nanny’s Corner from which Coxsone’s Downbeat sound system emerged, and Prince Buster’s Record Shack on Orange Street aka Beat Street.

On Sunday morning, November 27th there will be a symposium on the
originators of Jamaican music, highlighting some of the significant
contributors to the music such as Ernest Ranglin, Headley Jones, Bunny Wailer, Janet Enright, Lascelles Perkins, Chris Blackwell, Derrick Harriot, and Bunny & Skully. Two documentaries on Jamaican music will be shown Sunday evening at the Jamaica Music Museum in downtown Kingston.

The launch was hosted by Finn Partners, the public relations and marketing representatives of the Ministry of Tourism, The Jamaica Tourist Board, Fiwi Productions, co-producers of the festival, McLymont, Kunda & Company consultants, and Bullzii Marketing. Ras Clem of Groovin’ Radio in New York City served as master of ceremonies. Food provided by The Door Restaurant, Tower Isles Patties, and Ting. Wines were donated by Alsion Roach of ARG, financial consultants.