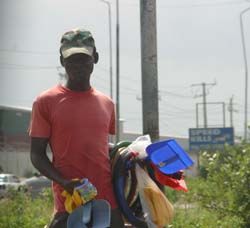 Based on an Associated Press (AP) survey conducted in the United States and the Caribbean, including Jamaica, the statistics show that one out of every 106 Jamaican males over the age of 15 is a criminal deportee sent back from America. Since the over-15 male population of Jamaica is about 856,000, this means that of a total of 17,000 deportees returned to Jamaica in the last seven years, over 50 per cent or about 8,000 are involved in criminal activities.

Wid numbers like dese we could open an Airline Company jus fa de deportees. ‘Deportee Airways’- only one destination offered, Jamaica. No worries about waiting in long lines at de airport because de prison wardens already check yuh in. No need to buckle up, you’re already handcuffed to de seat. Don’t worry about your luggage getting lost because you don’t have any as they deported you wid ongly de clothes on your back. I tink dat airline woulda probably give Air JA a run fi dem money.

De question to ask is why would a Foreign Government pay hard-earned tax dollars to house a hardened criminal in dere prison system when dem can jus send dem back a yard?? Can you blame dem for doing dat !! ( as it is, de US Gvt. is having a hard time paying for 2 wars and social security at the same time) At any rate, dese statistics show dat Jamaica sends more potential deportee’s abroad than they do high school graduates to foreign tertiary institutions.

“Our position is that we are seeking additional information, documentary proof of who are these persons. We need to be satisfied that they are all Jamaicans, and we will also need to know the nature of the offences for which they were imprisoned, so that we can make appropriate security provisions upon their arrival,” permanent secretary in the National Security Ministry, Gilbert Scott, said in a radio interview Friday.

I can see de American officials now: “This one can pass for Jamaican even though he’s from Trinidad. Why don’t we just put him on the plane to Kingston with the rest of them. Mr. Trini when you step off the plane just start shouting [email protected]#…and you’ll be fine”. I cyan even see dem trying to send second generations Yardies back home. ‘”Well he was born in New York but this parents are Jamaican. Just put him on the plane too.”

Scott said that Jamaica was obliged to accept its nationals under international law. When Jamaican criminals and non-criminals began to be deported from overseas, the security ministry, then headed by K D Knight, got Parliament to approve legislation to have deportees monitored. However, the plan hit several snags, as many deportees had no known addresses because they had no relatives here.

Obliged?! Missa Scott yuh sey dat we hare hobliged fi tek dem back. What yuh tink Merica woulda do wid us if wi didn’t tek de deportees dem back. Dem woulda kill wi wid sanctions and dry up any likkle Foreign Aid dat wi get fram dem. Please, don’t try to be diplomatic wid yuh ‘Obliged’. These are firstly Jamaican citizens and den secondly resident aliens. We are bound through international law and more importantly through common sense to facilitate the repatriation process. (sidenote this is not the kind of Repatriation dat Ole Marcus Garvey preached) What they need to do is find a secure way to receive dem in de country and to track/monitor dem for a specified period of time (depending on de crime dey committed a farrin).

Local police sources report that deportees in Jamaica have been involved in 600 murders, 1,700 armed robberies and 150 shoot-outs. These deportees, it now appears, are the nucleus of criminal gangs operating in Jamaica, some 30 of them in the Corporate Area and St. Catherine.

Yuh rememba what Mobay did when dey wanted to get rid of all de Madman dem pan de streets ?? (a tink dey were scarring aff de poor tourists) Dem pile dem up in de back of a truck and ship dem off to Moco. Well, maybe we shoulda implement a similar stratchigy to deal wid these deportees who are apparently to blame for a large percentage of the criminal activities in JA.

For the health of Jamaica’s social and economic structure, something drastic needs to be done to monitor and contain these deportees because what we have now are criminals roaming Jamaica who have been schooled and trained abroad in tactics and techniques that our Local Police are not even familiar with (I’m not really sure what exactly they are trained in). It’s our very own student exchange program (like AFS) with the Mafia and local gangs in Britain and the US and they are graduating with a big ticky and reeking havoc on de island. With that in mind, look for ‘Deportee Airways’ to expand its schedule to include non-stops flights from Toronto, Canada to Kingston, Jamaica.

Ray Damdar is a Jamaican living abroad in Hartford, CT amongst de third largest Jamaican population in Merica. He is constantly amused by his culture and has no odda choice but to comment. Favorite saying ” if yuh fling stone inna hog pen, de one who squeal is him it lick”