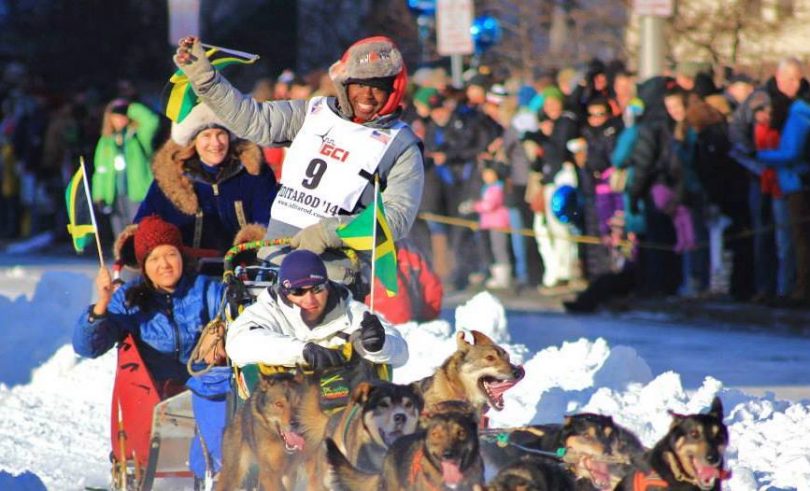 Everyone knows that Jamaica has a bobsled team, but did you know they also have a dogsled team. They have been competing in the Iditarod race since 2010. If you are not familiar with Iditarod, it is a growling dog sleigh race through the snow. This week we speak to Newton Marshall as he prepares for the Iditarod in March 2013. Here is our conversation with Newton.

What attracted you to dog sledding?
A traveling opportunity. I was getting an opportunity to go places that I didn’t know that I would be going to. First I went to Minnesota to learn about dog sledding. It was zero below in March I’ve never experienced cold before. I stepped out of the plane and then this cold air just came right through my veins. I turned back and looked at the guy behind me and I said to him “why did they have to turn up the a/c so high?” the guy said “brethern it’s the cold outside.” I was frightened. I did not know that cold existed like that.

Jamaica has no snow, so when and where do you practice?
Well, I practice in Alaska in the fall, every fall I come up and train. It’s not cold in Jamaica and I don’t train in Jamaica because I don’t have the dogs. They are in Alaska. And the training is bonding with the dogs. It’s a lot of physical and mental work and you learn a lot about the dogs and yourself. They wanted me to go into a freezer in Jamaica to train and learn about the cold but no artificial thing to my thing. It’s a different cold than what you have in the freezer. It’s natural the cold in Alaska is dry and it cracks your lips your fingers and it sucks out all the moisture out of your body. My nose bleeds very often because of the dryness. Have you sustained any major injuries dog sledding?
I have only got frost nip on my nose, not frostbite, but frost nip. So anytime I am back in the cold it comes back really quick and it burns and stings like a bees. I freeze my feet but they’re intact still. 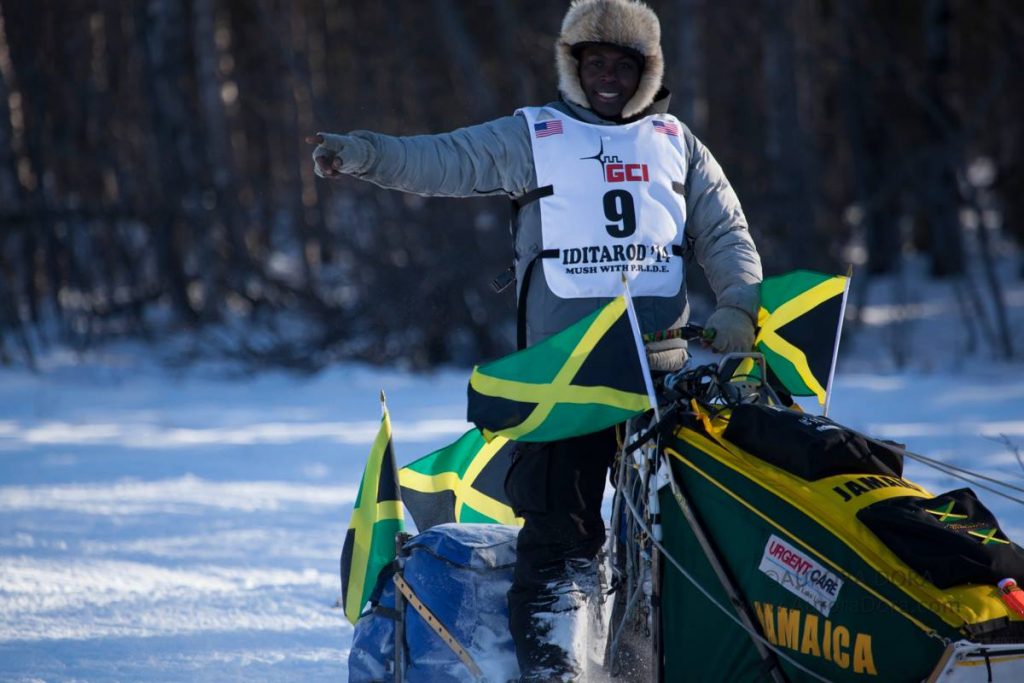 Unlike track & field and football, dog sledding isn’t common in Jamaica because there is no snow. How could more children in Jamaica get involved in the sport in the future?
First they have to teach it in the schools and if I get the opportunity to go around the schools I could teach them more. My platform is really for literacy because I am just learning how to read too. So it would be a pleasure and an honor to go around and talk to kids and educate them about dog sled team and what they can be involved in something for themself and their country.

What can we do to support the team and the continued development of future teams?
The government can invest more into Mushin’ Mon and then we can go around and teach it in schools and get younger generations into it. It’s also an opportunity to learn more about survival skills and think more positive

What is the weirdest question or comment you have heard on the circuit being a Jamaican dog sledder?
Well, when they see the Jamaican dog sled team people always say “wait I think they made a mistake I think you guys mean to say bobsled team.” and people are amazed that Jamaica has a dog sled team. And I as a Jamaican feel proud to do something for my country that no other black man is doing to take on the wilderness and survive it.

What will it mean to you to be competing in the Iditarod again?
Jamaica is standing tall in spite of what the world is saying we are doing something extraordinary. We are an extraordinary race and we are the “most” happiest people on the planet

The one movie you can watch over and over again…
There is no saying, it has to be of all times Cool Runnings

Any closing thoughts…
I hope they hear my call I hope this can help to change the younger generation. And continue with this trend I hope the government will help to do this it is very expensive I am from a very poor background and really and truly can’t afford this but with the help of people on Facebook and friends and followers make it so I can afford it this time. I got no help from my country but I hope they will see and hear my cry and make a change.
Visit the following websites to learn more about the team: