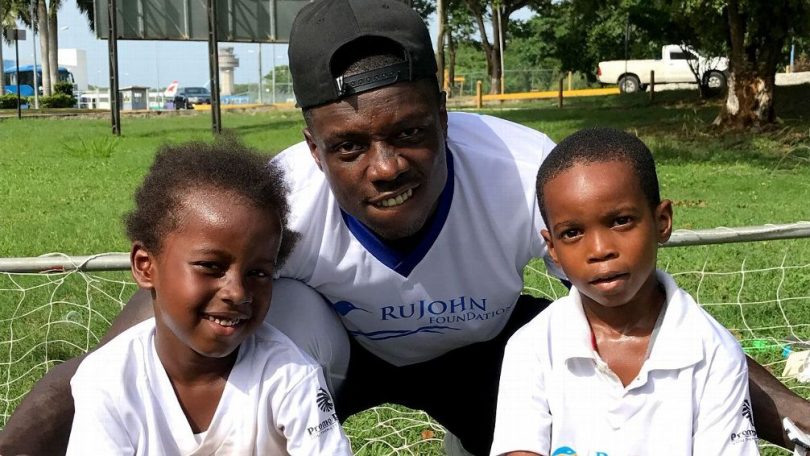 Darius Butler, Indianapolis Colts’ defensive back, empathizes with the happiness and enthusiasm shown by Jamaican children at his football camp because he felt the same way when Warren Moon, former NFL quarterback, tossed him a football during a fan event he attended at the age of 10 during the 1995 Superbowl Week XXIX in South Florida.

Now, In 2017, Butler is completing his fifth consecutive year participating in a week-long football camp in Jamaica. His participation began as a favor to a close high school friend, but it has become a yearly event for Butler during his offseason.

His friend is Andrew Bachelor, whose parents are Jamaican, runs the RuJohn Foundation, an organization that hosts sports and educational workshops for children in Jamaica. Butler says it is “awesome” to see how excited the Jamaican children, who range from six to 18 years of age, are to have the football players take an interest in them. Following the workshops, Butler stays in touch with the kids via email and social media, knowing that it is the “little things” that go a long way toward making them know he cares about them.

Since its inception, the Foundation has sponsored guest speakers and participants including actors Jussie Smollett and Raven-Symone, former Colts player Raheem Brock, and other players from the NFL. Jamaicans are not very familiar with American-style football as rugby, track and field, soccer and cricket are more common in Jamaica, but players like Butler work to introduce the kids to the game and show them its fundamental. Butler says all the camp’s participants have the talent, speed, agility, and toughness required to play American football. The only thing they lack is the structure, and that is where the players can help them.

Butler has a real passion for the Jamaican football camps in Montego Bay and Kingston, but he also assists with the basketball camps held there, and he has hosted his own football camp in Fort Lauderdale in Florida. It was traveling to Jamaica that inspired him to start his own youth camp, and he hopes he can make the same kind of impact as the Foundation camps do for kinds on the island. He understands how something seemingly small like a hug or a quick talk can go a long way in letting the kids know that they can attain their goals if they put in the effort.