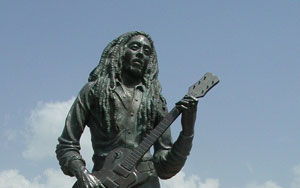 Every February since International legend and King of Reggae, the Honorable Robert “Bob” Nesta Marley’s death, many people worldwide visit Jamaica to participate in celebrations and festivities in his remembrance. The International Reggae star’s memory is kept alive at his original former residence in Kingston, now known as the Bob Marley Museum. And, an even greater tribute is capsulated in a tour of Bob’s birth village in the parish of St. Ann, so lovingly called “Nine Mile”.

Nine Mile is owned and operated authentically by Bob’s family. Many come from far and wide to visit this tranquil village in search of reliving and sensualizing Bob’s beginnings. Nine Mile is where Bob’s journey began and so powerfully influenced many of his songs. Bob’s serene hometown gives it’s visitors a truly grand guided tour of where Bob was born (the original birth house), the nature grounds where he grew up, and where he spent much of his time meditating on “Mt. Zion Rock”.

Nine Mile provides a birds eye view of Bob’s birth, his life and his final resting place; the surroundings set the firm foundation that influenced the King of Reggae music and Legend. Experience Nine Mile in the month of February where you are sure to hear the childhood stories of Bob, even birthday stories, told by his mother.