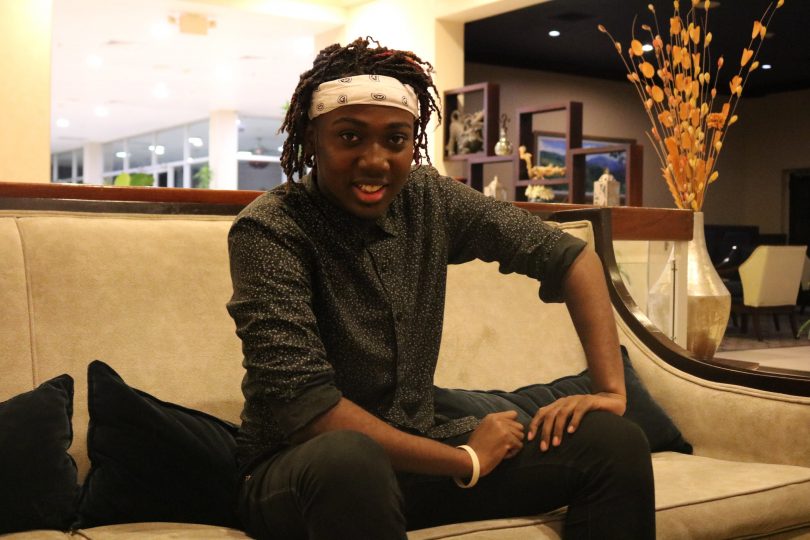 Whether we want to admit it or not, many Jamaicans are guilty of attributing harsh labels to people who look, act or think differently than the masses. This is bullying and a clear manifestation of discriminatory cultural norms in the island that lead many to refer to a fat person as “fatty”, a person of short stature as, “shortie”, someone who lost a limb (arm or leg) as “oneie”. And these labels I’m sharing are mild in comparison to the pet names assigned to Jamaicans who defy traditional, social norms.

On the receiving end, the bearers of these labels often lead a life of insecurity, self-doubt, and unhappiness as they seek to escape the unwanted hate hurled at them by bullies on a daily basis. 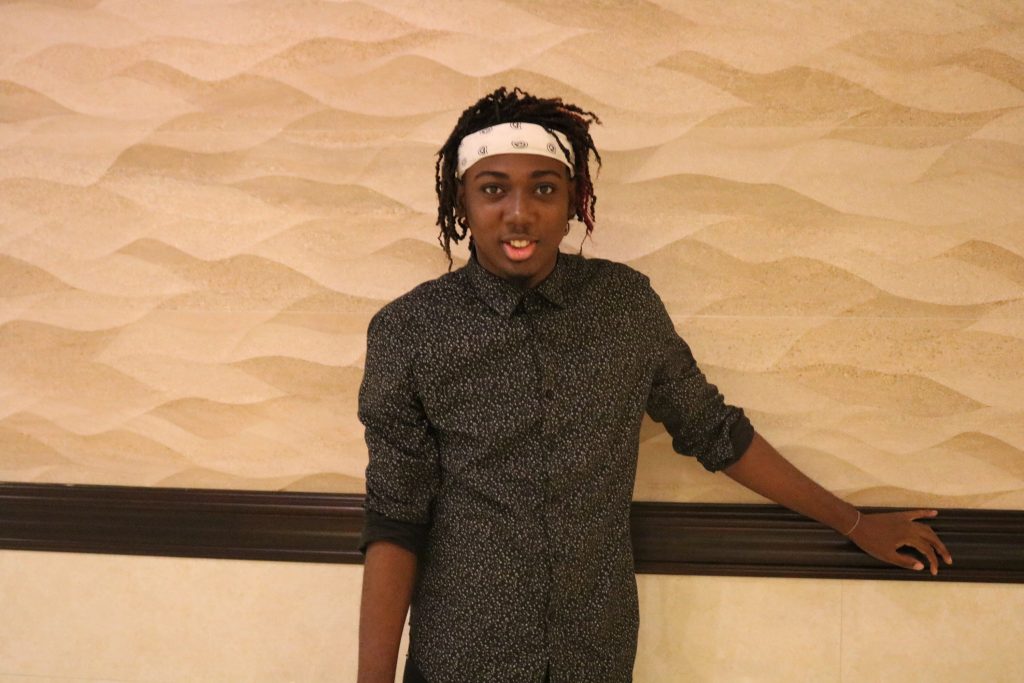 His encounters with bullies started in primary school. DahNiel-Jae recalled being bullied for numerous reasons including his love for the performing arts. He spent years masking the emotional pain he felt from being teased, laughed at and isolated, having only his great grandmother as his confidante and number one supporter of his artistic interests. But the years of psychological distress came to a halt when his number one supporter passed away and DahNiel-Jae was forced to become his own hero.

Yeah, it was at [the] end of high school where … Okay we’re getting personal … It was the end of high school where I lost my great grandmother. She was a tower of strength even though she had one leg. She was everything to me. And, I made a promise to her that I gonna pass all my CSEC subjects, and I was gonna get a big house. It was going to have a home theatre in it, and we’re going to enjoy shows. Her favourite movie was the Sound of Music. I was like,

‘I’m gonna get the best Jamaican-looking, Julie Andrews for you and we’re gonna do that ‘Sound of Music’.

And she passed. And I was like, no. I really, really wanted to do this for her but I realised, if I continued on the path that was where I was so afraid of everything and everybody and what everybody was saying, then I couldn’t have even done it for myself. I was like,

And that’s where I was like, I don’t want to sit and cry anymore because I was picked on or because someone didn’t understand who I was.  I went to look in the mirror and say,

‘I understand you and I like you. You’re amazing. Be what you want to be’

So I’m looking in the mirror and I was like (to my reflection),

‘I like you too. You’re a really nice person.’

I was literally having a conversation with myself. I think sometimes we need to stop and we need to talk to ourselves. I mean, shut out the world. Talk to yourself. Look at yourself in the mirror and be like, ‘I like you. You’re an amazing person. And you good looking to’. Yu’nah mean? Talk to yourself. 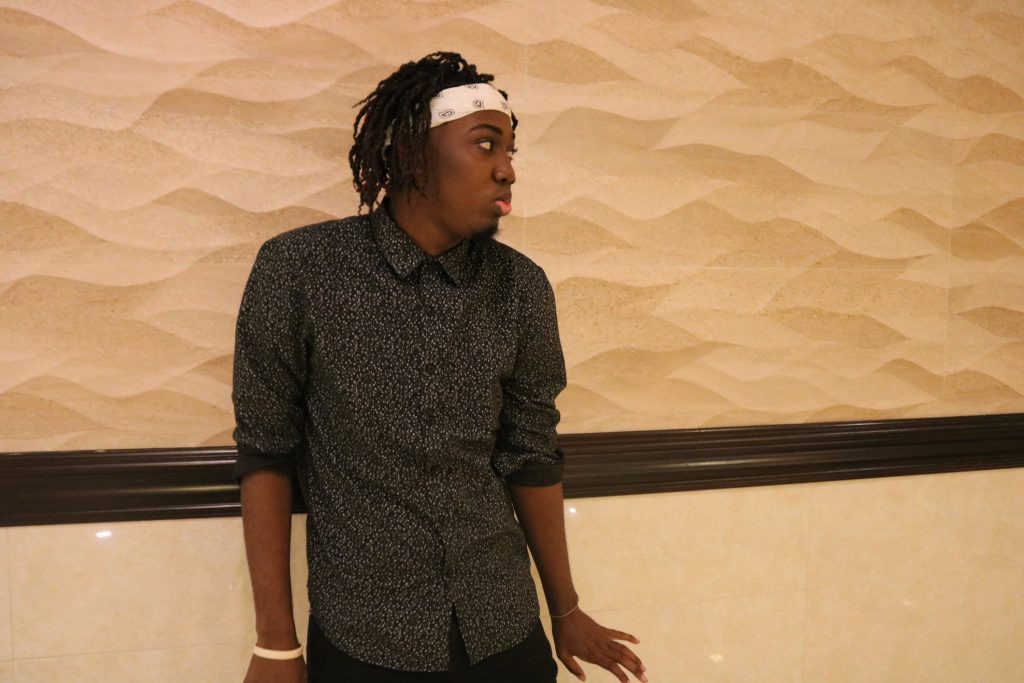 It’s called, ‘Lala Bella Enters the Spelling Bee’…it speaks of this little, young girl by the name of Lala Bella. I created the name ‘Lala Bella’ to mean, ‘Lala’ sing and ‘Bella’ as in beautiful so she was the beautiful singer. And she was the person who was afraid of everything and she held back and she stayed in the corners and she tried. She tried very hard to impress her family and it never always worked out. She tried very hard to impress those around her and they shunned her. Until she said,

‘I want to impress me. I’m all that I need to impress really and when I impress myself then everyone else will fall into place and if they don’t, too bad because I love me’.

And she took that motivation and she just went with it. Mark you, she isn’t the brightest of persons but she entered the Spelling Bee because she said,

She did that and she…well I mean, shi neva win but at the end of the day she tried. And that’s what I want people to get from my shows. I don’t want you to come thinking it’s going to be a Disney movie where the princess always ends (up) with the prince. That’s not life, it’s not always going to be rosey dosey. Sometimes bad things happen but at the end of the day, let it be that you learnt a lesson….

So, I love music. I love drama and … I like dancing, I can’t do it so well but I love singing being done in its fullest. So if I can find a way to tie all of these together, I think we have a very good show! And that’s what I’ve done. I wouldn’t call them musicals … Perhaps pantomimes because, you know, there’s just one or two songs, some of which are originals. But we haven’t gotten to the stage of a full-fledged musical yet. But we do shows that incorporate music and dance. And we try to think outside of the box. We don’t want you to just see and hear and be like, ‘Ah, ooh.’  I remember one of my shows, we had … I think that there was cooking backstage and we just had the smell of the food going into the audience. So the audience felt that they were a part of the show. They smelled, they saw, they heard. They just became one with the show. So yeah, we do shows that incorporate all of the senses. But yeah, we do music and drama.

We did two shows as the ‘Kreative HeARTS Movement’ and then another friend of mine asked,‘why not take your brand so much further?’ Like how further? We started delving into charity and outreach. So our plays, the income, started going back to charity…We did children’s homes. We helped out with Good Deeds Foundation for one of their ‘back-to-school’ treats. Yeah, so we did that and then we had the performing arts group going on. We do mentorship and homework (assistance) and then we perform to fund these initiatives. Then we said, ‘Okay. Those would be the three arms of the ‘Kreative HeARTS Movement’. Thus it stayed ‘KH3.’ 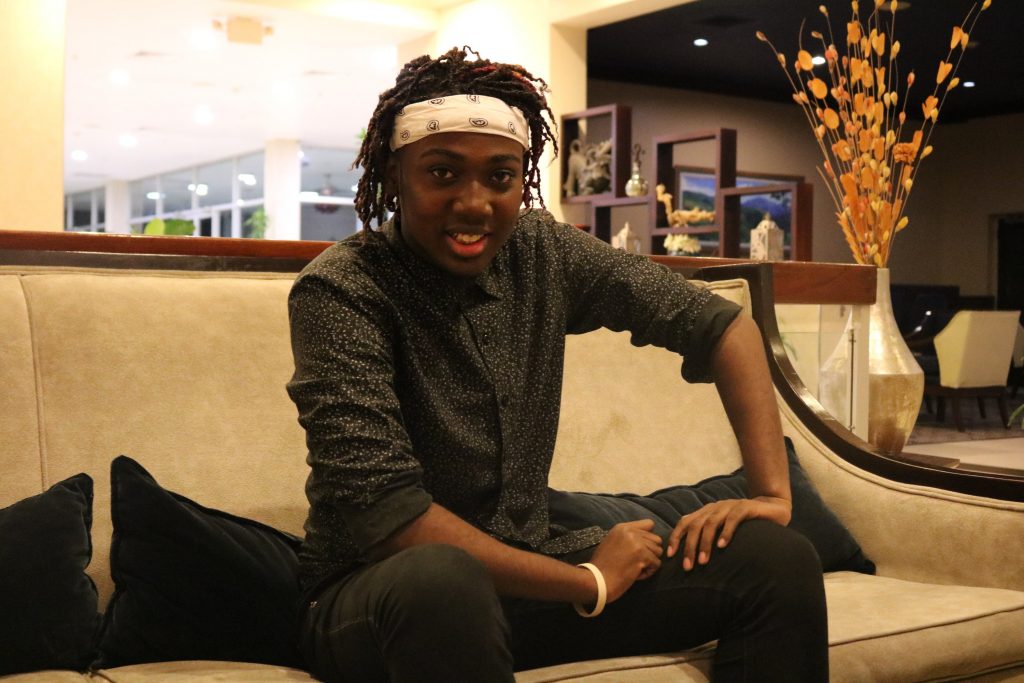 I am very strange and weird and abnormal. I’ve been called that my entire life and I like it. I think it’s just… I think they’re very beautiful labels. I mean, who wants to be called … I mean, I’m a pretty eccentric young man. I mean, clearly (gesticulates). So automatically we attach labels to things that we don’t understand, to things that don’t seem like the norm to us. To things that we don’t … That our minds cannot fathom.. It is a stereotype of persons in the creative world that we are of the lifestyle and we’re all jumbled like that together because there’s no escaping that bandwidth. But really and truly it’s … I think it’s 2019. I think it’s time we, you know, we shed those labels and the idea that of, ‘Oh you’re weird so I’m gonna just call you whatever I want to call you’. No. I think it’s time we stop doing that.

I wear my braids because I like having long hair. I like when it flashes in the wind. It makes me feel free. It makes me feel like I can fly. I like wearing fitted clothing because I’ve been working out. I want to show it off so it has nothing to do with my sexuality and my sexuality has nothing to do with anybody else. And that’s really just how I see life.

It’s kinda hard to answer that because there was really no one there to tell me what, you know…To help me at that point. There was no one there to say keep your chin up and …

And it was at that point … And my great grandmother died. And before she did, she did tell me at one point that, ‘If people don’t like you, that’s how life goes’.  People are not going to like every designer’s fashion piece. But some of the most un-liked ones are actually the most famous ones and the most expensive. So, someone doesn’t like you? Oh well, they just missed out on something really, really lovely. You nah mean? …It’s all a process. You lift your head up, you start walking. So once your head is lifted, you just continue walking. So for a young man who is being bullied and he’s going through a lot … Bro, you got this. You’re amazing.

Thanks for that DahNiel-Jae and thanks for sharing your story!