Rafe Cochran, a 12-year-old golfer from Palm Beach, Florida, has made it possible for students at Chester Infant School in St. Ann, Jamaica, to attend classes in a totally new school building. In the summer of 2017, Food for The Poor (FFP) Jamaica constructed classrooms, kitchen, bathrooms, sick bay and office, all of which were funded by a generous donation from Cochran. The young golfer has also donated to programs in Haiti since the age of nine and is glad to support the school project. His donation was raised through a fundraising golf event, The Second Annual Rage Cochran Golf Classic, which was held in Palm Beach. 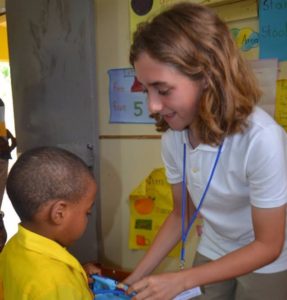 Cochran said he was very excited to be in Jamaica at the school, a place he visited in March 2017. He said it was rewarding to see the infant school “come to life.” During his March visit, Cochran saw first-hand the crowded conditions faced by students in the classrooms. Speaking to students at the hand-over ceremony, Cochran reminded them to focus on their goals and to “be agents of change” regardless of their young ages. “This school will change lives,” he said as he emphasized to students that they should never give up. “You are never too young to take action and make a change in people’s lives,” Cochran added.

According to Delane Bailey-Herd, the senior field representative of FFP Inc., The 12-year-old became involved with the organization at the age nine when she spoke to his class of third-graders about chaining the world and helping people. Cochran told her he wanted to help, and he made a visit to Food for The Poor’s head office shortly thereafter and began contributing to the charity following his visit.

Photo Source: Food For The Poor