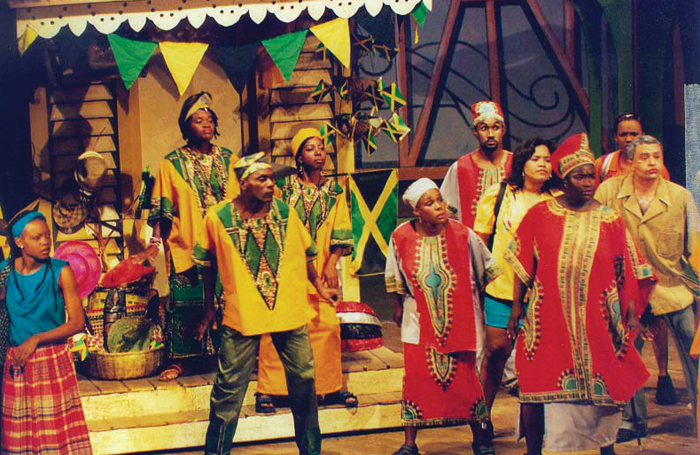 Jamaicans pride themselves on their sense of rhythm, their love of laughter and their loose-limbed style. It’s a reflection of the many cultures blended into one unique style, a marriage between the Old World and the New. We boast that we make drama of everything. An old Jamaican phrase advises that “we tek bad sinting mek laugh” which translates to the speaker tempers potential tragedy with humour. Nowhere is this Jamaican characteristic more in evidence than in the over plus year-old tradition called the National Pantomime. Even though the world pantomime evokes visions of a performance without words, Jamaicans adapted the word to describe a fast-moving musical comedy with plenty of dialogues in the local patois – which is a blend of standard English and the Twi dialect of West Africa. Far from being a silent show, this delicious concoction produces a potent piece of theatre alive with wisecracks, send-ups of peculiarly local situation, and lampoons of historic events. Pantomime “makes sports” of grave matters, and mimics the foibles, the heartbreaks and the joys of Jamaican life. The Pantomime audience in turn responds with continuous peals of laughter and even joins in repartee with the performers, becoming an integral part of the show itself.

People of all ages, from all walks of life and every part of the island, descend on downtown Kingston for the annual National Pantomime offering. Many even charter buses to transport entire towns and villages to Ward Theatre, the traditional venue for the Pantomime. The tradition dates back to the years when Jamaica’s Little Theatre Movement, the Carribean’s oldest theatrical ensemble, staged traditional versions of the English Pantomimes that were based on fairy tales. Actors and actresses performed in standard formulas: a Dame, for example, always appeared in a comic, exaggerated manner so that there was no confusion about the actual male identity of the performer. A Principal Boy and a Principal Girl routinely added romantic interest and a villain provided the conflict in the story line. “Beauty and the Beast” “Sleeping Beauty,” and “Pandora’s Box, ” were among these early British favourites.

But as Jamaicans always do, they soon transformed English tradition into their own thing. They added characters from Jamaican folklore like Anansi, the West African spider god, and his innumerable prodigy – Brer Tacoma, Brer Tiger and others. Soon playwrights brought in caricatures of public figures like politicians and police chiefs. English music-hall songs gave way to indigenous rhythms , including the drumming frenzies of Pocomania and the beat of Christmas time’s John Canoe (Jonkanoo) dances. Contemporary rhythms like ska and reggae eventually found their way into pantomime scripts like that of “Johnny Reggae.” “Carib Gold” in 1960 and “Banana Boy” in 1961 saw the introduction of sophisticated dance movements ushering the establishment of the NDTC in 1962.

A distinctive innovation of the National Pantomime is its use of “topicalities.” Topical vignettes comment on and usually satirize current Jamaican events that are the talk of the island. Jamaica’s all-time queen of the theatre, Louise Bennet, invented the art form in an impromptu moment on stage one year.

“It was in one year’s Pantomime that things went wrong backstage,” she recalled. There was what you would call an uncomfortable pause in the action, so the director shoved mi in front of the curtain and told me to do something….anything.”

Now when the public utilities breakdown, topicalities produce a National Pantomime figure who invokes the gods to “let there be light, let there be light……and water too.” Or when a character falls ill, he will mimic utilities’ officials by telling the audience to sympathize with him “because mi number six generator break down.”

Major actresses, actors, dancers and singers donate their time and talent. Miss Lou and the late Ranny Williams led the headliners for many years, and the pantomime has made household names of performers like Charles Hyatt, Oliver Samuels, Lois Kelly Miller and Leonie Forbes.

The Pantomime opens its season at 6 p.m. on Boxing Day each year. That’s the day after Christmas in Jamaica, a traditional English holiday when the gentry used to share the boxed-and-bowed remnants of their Christmas feast with the poor.

Audiences continue to grow each year, as do the number of performances. Twenty performances were considered an accomplishment in the early days of the show. The 1981/82 production of “The Pirate and the Princess” broke all attendance records with 124 continuous performances that ran beyond Easter. The play was written by Barbara Gloudon, who has penned five of the National Pantomime productions – more than any other person. In addition to performing in more than 30 of the shows, Louise Bennett has also written or helped write many.

Increasingly elaborate stage sets and the lack of proper theatre facilities outside the capital city have confined the annual production to the venerable Ward Theatre in the heart of Kingston. The Ward was a gift to the city from Colonel Ward, nephew and partner in the famous rum firm of J. Wray and Nephew Limited. This has not kept Jamaicans from making their annual pilgrimage to the Pantomime – even it means a dusty and hot bus ride.