Up the Place Poised as next High Energy International Hit from RDX - Jamaicans.com 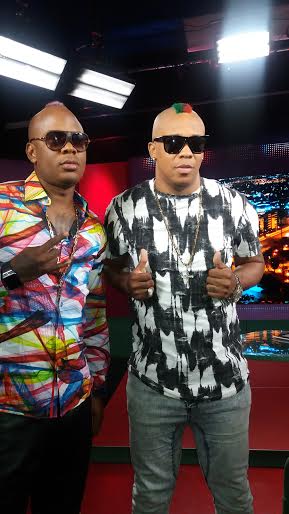 The Dancehall Shella Bosses, RDX, have released a brand new single that has already turned heads and is generating positive international attention.

The single ‘Up The Place’ produced by the duo’s own label, Apartment 19 Music, is dubbed as a song from a new genre called “Aerobix Dancehall Music”; a high energy mix of dancehall and EDM/house music beats.

Written by the Apartment 19 team, the Shella Posse, ‘Up The Place’ is inspired by the international success of the RDX single “Lose Yourself” with Major Lazer. The 2014 mega hit ‘Lose Yourself’ opened up new markets to the dancehall stars and currently has close to thirty million views on YouTube.

RDX sees the fast paced sound in ‘Up The Place’ as them returning to their roots, undiluted high energy dancehall fusion.

“Recently we diversified the RDX brand BY adding slower, message driven singles like “Linky”, “VSOP” & “Nuh Badda Than Massa God” to our catalog. This song ‘Up The Place’ though has us going back to the roots of what made RDX the internationally renowned stars we are, complete undiluted energy!” Renigade explained

With the Dancehall sound booming internationally right now, “Sorry” by Justin Beiber & “Work” by Rihanna are examples of this trend, the timing is right for a Jamaican Dancehall act to showcase their own sound to the international audience.

“It seems as if a lot of Jamaica’s Dancehall releases are going the opposite direction. RDX is looking at the big picture and stepping up to the plate, representing for the dancehall sound that so many overseas acts are following” Delomar chimed in.

With this year already off to a great start, RDX is confident that their upcoming releases will continue the upward trajectory of their career.

“”While some others using their time on controversy we been in the studio preparing mad music for 2016. Controversy gets you attention, music get you a Platinum plaque.” Delomar added

Plans are already afoot for the visuals for the ‘Up The Place’ Single with a treatment the duo describes as ‘#Epic’. The track is distributed by Hapilos Digital Distribution and is already number 7 on the Hapilos top 10 sales chart since its February 26 release.

The new RDX EP ‘ 2FloorsUp’ is set for a summer 2016 release. RDX is also preparing for a US College Tour this spring.