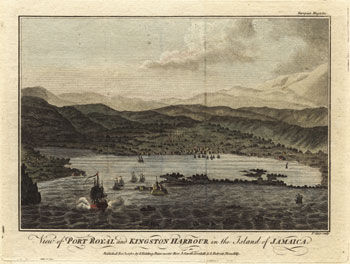 From February 16 through June 3, 2007 residents in South Florida will have an opportunity to view a large collection of rare artifacts from the famous Jamaican city of Port Royal, much of which sank under the sea in a devastating earthquake in 1692. Once known as the “wickedest city on earth,” Port Royal has a past far richer than pirates’ treasures. We interview Dr. Stephen Stuempfle, chief curator for the Historical Museum of Southern Florida.

Q. How did you become involved in Port Royal?
The concept for an exhibition on Port Royal was proposed several years ago by Wayne Modest, Director of Museums of History and Ethnography at the Institute of Jamaica. Since then, the project has moved forward as a collaboration between the Institute and the Historical Museum of Southern Florida.

Q: Can you explain the process of gathering the materials and information for this exhibit?
The Institute of Jamaica and other government entities have been actively researching Port Royal and collecting artifacts from the site for several decades. This research and collecting provided the foundation for the exhibition, though additional work was carried out by the Institute and the Historical Museum over the past couple years.

Q: What challenges do we face in presenting world wickedest city to the public?
Though Port Royal was known as a “wicked” city, there is actually much more to the story. The goal of the exhibition is to provide a more complete picture of the city and of its role in the Caribbean and the Atlantic world.

Q: What do you believe was the most significant period in history for Port Royal?
Every period of Port Royal history is significant in its own way. Before the 1692 earthquake, Port Royal was a major center for the raiding of Spanish ports and ships, for the trade in enslaved Africans, for the importation of goods from Europe and other parts of the world, and for the work of a wide range of craftsmen. During the eighteenth and nineteenth centuries, Port Royal served as an important base of the British navy. In more recent times, Port Royal has continued to exist as a proud community and as a site for the preservation of heritage. All of these periods are examined in the exhibition.

Q: Who do you think contributed most to Port Royal being none as the wickedest city in the world?
I guess that Henry Morgan is probably the best-known contributor to Port Royal’s wicked reputation. But he tried to become legitimate and was appointed lieutenant-governor of Jamaica in 1674.

Q: We have heard the stories of Port Royal being the launching point for most of the pirates in the Caribbean. How true this is and what information did you find during your research on this?
Piracy did thrive in Port Royal from the late 1650s into the 1670s. The pirates, however, were actually “privateers,” since the English government authorized them to raid the Spanish. Though Port Royal was important, pirates also operated in other parts of the Caribbean.

Q: Based on the historic information you found do you think there is still buried treasure in Port Royal?
Buried under the sea are many artifacts that could provide more information about daily life in Port Royal during the seventeenth century and after. The value of the artifacts lies in their being recovered and interpreted by archaeologists and historians.

Q: What do you think they should do with the city now?
My understanding is that plans are currently in place for more preservation and interpretation of Port Royal as a major heritage site.

Q: Movies and other media forums tend to drive interest history. Do you think fans of “Pirates of the Caribbean” be intrigued by the exhibit?
I think that fans of pirate movies and books will be fascinated by the exhibition. This is a once-in-a-lifetime opportunity to see, in the U.S., a wide variety of actual artifacts from this famous city.

Q: Will Port Royal Jamaica be the final home for the exhibit or is the intention to have an exhibit that tours the world?
The exhibition will be on display at the Historical Museum of Southern Florida from February 16 to June 3, 2007, and at the Institute of Jamaica in Kingston from January to June 2008.

Q: I have heard that for most exhibits there are limits to what is displayed due to space and time. Were there any pieces or information you could not include in this exhibit that you wished you could?
We were able to present all of the outstanding artifacts sent by the Institute of Jamaica, and were also able to include some antique maps and other material from the collections of the Historical Museum and other institutions. We wanted to include a couple of wooden models of seventeenth and eighteenth-century English ships, but could not afford the cost of borrowing such items from other museums.

Q: Can you tell me about your background and how you got into this field?
I have been studying the history and culture of the Caribbean for more than 20 years and have been working at the Historical Museum of Southern Florida for 12 years. Since my specialization is actually Trinidad, it has been exciting to learn more about Jamaica.

Q: Thanks for spending the time with us to discuss the Port Royal Exhibit. Do you have any final thoughts for the visitors to the Jamaicans.com website?
I encourage everyone to visit the exhibition and to tell his or her friends about it. More information is available at www.hmsf.org. Thank you for the opportunity to share some thoughts about the project!