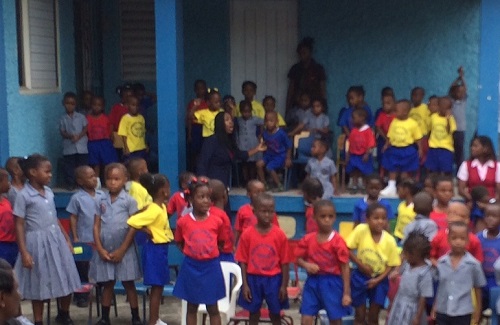 The most devastating things that can happen to a child is having a teacher who does not recognize and nurture his or her inherent abilities and talents, and an education system that limits their potential by shutting them out. Many other obstacles can prevent a child from achieving optimum performance but it should not be uninformed teachers or the education system offered by the Government. Kudos to teachers who recognize the whole child and consistently create supportive and enriching interventions for all students within the classroom setting.

Proximal development can only occur when the child’s abilities are aligned with the right opportunities.

Jamaican teachers have always formed the foundation for our nation’s economic and social advancement by facilitating the emotional, academic and technical development of our children. Consequently, our entire school system plays a critical role in determining whether or not children experience a sense of pride and social purpose through academic success.

During my childhood many academically gifted students could not attain their full potential, due to the type of educational opportunities offered to them. There was a scarcity of traditional high schools, and the exit examination from primary school (The Common Entrance Examination and its later modified form The Grade Six Achievement Test – GSAT), was seriously flawed. Only a limited amount of passes were allocated to the high schools in some of the rural areas. In addition, it was said that many students were denied their rightful placements, because these places were given to students of more affluent and well-known parents in their communities.

After speaking with some individuals who attended junior secondary schools during the seventies, and who are now a part of the Diaspora, a common thread has emerged : They admit feeling robbed of their opportunities to attend a name brand high school during their time. However, they insist that their children and grand children have received better access than they did as young students. They made sure of that. They further affirmed that “wha a fi-yuh cyaah be un-fi-yuh”.

Recently, the government of Jamaica attempted to resolve this problem with many advancements in how it delivers its educational offerings to reduce bottlenecking.

First is the conversion of all secondary and junior secondary schools to traditional high, comprehensive and technical high schools, regardless of whether they are institutionally operating as such.

Secondly, the government is attempting to dissolve the shift system in schools, thereby creating another level of equality. Parallel to that is the extension of high school education to grade thirteen. At a time when it is important for the alignment of the adolescent’s ability and interests, high school students are given the chance to decide on pursuing an academic track in the sixth form, or they can opt for vocational enhancements in the final two years in grades 12 & 13.

Third, our basic and infant school system has served our country well but sometimes needs additional structure to create a more effective foundation for the promotion of students to primary levels. Recently, a new feeding program was launched and there was a deployment of some certified teachers to this sector to advance stimulation and pedagogy.

Finally, to help create and maintain equal access to secondary education, the government launched its Primary Exit Profile (PEP)as a transitioning and transformational tool for entry into high schools. PEP, according to the Ministry Of Education, Youth & Information (MOEYI) , “is a series of assessments that will provide a profile of where the students are academically, their strengths and weaknesses, and their readiness for grade seven. PEP, replaces the Grade Six Achievement Test (GSAT) and will assess students’ knowledge, in addition to, placing increased emphasis on assessing students’ demonstration of the 21st-century skills, for eg. critical thinking, communication.”

Change can be an unwelcome phenomenon at times, as it has the potential to create some level of fear among us. Conversely, there is excitement within the Diaspora, especially among individuals who felt cheated or disenfranchised. For them, PEP is seemingly creating and encouraging a balanced offering to students entering high school across the island.

Attaining perfection within our education system might not be possible, because teaching and educative approaches are sometimes subjective. But it is apparent that the Government of Jamaica is attempting the best solutions for getting us close.

I applaud our teachers for their dedication, creativity and their passion in creating optimal learning opportunities in their classrooms, one child at a time. It is my sincere hope that as PEP is executed the subsequent results will show massive improvement in Jamaica’s educational access and offering.