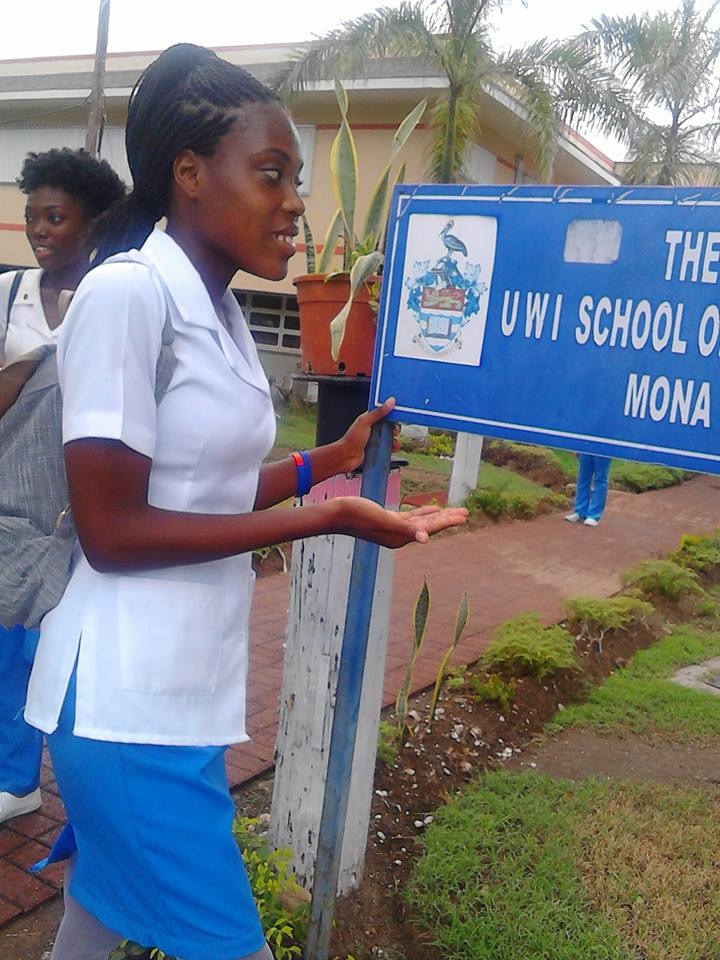 Very often, a physical disability becomes a significant setback in an individual’s ability to lead a normal, successful life.   For Valrie “Kim” Johnson of Cox Street, Port Maria, St Mary, Jamaica, failure to achieve her life goals as a result of a physical impairment was never to be an option.  Every apparent barrier in her life would serve as a hurdle over which she would jump and a learning opportunity to combat difficult situations. And so, for Kim who has had one of her legs atrophied, she learned to use crutches. Later on, as she was forced to amputate one leg, she adapted and learned to walk with prosthetics. Over the course of one year, she had to be out of school due to surgery. However, she returned to school with better grades than before. While some persons faced with similar situations would become introverts Kim became an extrovert being fully adjusted into life as a nurse in training. Prosthetics is no barrier for this young Jamaican nurse trainee

In June 2011, former Vice President and Education Chair of Jamaica Awareness Association of California, Patrick Williams, was in Jamaica on the organization’s annual mission, when he was approached by ……year old “Kim” Johnson and her caregiver.  They were seeking help to correct a situation, whereby Kim was born with one leg shorter than the other. Indications are that after five surgeries, she has had to rely on the use of crutches since 2008. This has posed challenges to Kim’s mobility as she has had to walk at least four miles each day, including around the school grounds. She needed surgery to amputate the defective leg and replace it with prosthetics.

Patrick approached JAAC’s volunteer pediatrician for her thoughts and then JAAC’s medical chair sprang into action. The organization at large was in full support and immediately began arrangements to have her visit California for assistance.    After further consultations, JAAC’s medical volunteer, Dr. Linda Tigner-Weekes was able to arrange for her to have the surgery done free of charge at Shriner’s Children’s Hospital in Los Angeles. JAAC member Linda Coy volunteered to host Kim and her aunt in her home and the rest of the organization pledged to provide food and transportation to doctor’s appointments. Kim and her aunt Sonia received their visas and arrived in California where they would spend the next six months with their new JAAC family.    It must be noted here that we believe that the only Challenge Kim had assimilating to life in the U.S. was fitting her new prosthetic leg and walking upright. Any other apparently adverse reaction on her part would only be due to the excitement she was experiencing as she learnt for the first time to walk on the same level with both feet.   Kim is smart, well spoken, funny and at gatherings, often left members of the organization in stitches when she sat among us.

Upon Kim’s return to Jamaica her significantly improved confidence was well evident. The principal at Oracabessa High (Mr. Lofters), where she attended school remarked that her academic grades had improved tremendously and that he was happy to have her back at school.

After completing high school, Kim’s ambition was to become a registered nurse. JAAC members again decided to assist in making Kim’s dream a reality. To the delight of JAAC, she was accepted for the top three nursing programs for which she applied in Jamaica before deciding on ……………Thanks to the generosity of Dr. Una Morris Chong, JAAC will be administering a scholarship in support of this extraordinary young lady. I had an opportunity to dialogue with Kim after she was accepted to nursing school.

What does nursing mean to you?

Nursing to me means helping and trying to make a big impact on every single life that I will encounter in the practice.

How did this interest come about? Tell me about it.

My interest in nursing came about when I was 14 years of age and was admitted in the hospital, I felt distressed about how badly patients were being treated by some nurses. I felt like I wanted to be the change of that and prevent the harsh treatment and that was how my dream of becoming a nurse was initiated.

I am from the beautiful parish of Saint Mary, where I lived with my grandmother who also raised my siblings and cousins. Growing up with my grandmother, I was taught valuable life lessons, such as hard work, discipline, responsibility, and having sound Christian principles instilled in my life. I attended the Oracabessa High school (2007-2014). Due to illness, I had to repeat the ninth grade and the eleventh grade. During high school I maintained a good attendance record.

Growing up as a child did you envision this? What were your dreams as a child?

No, I did not envision this growing up as a child; In fact, my dream in life was to become a teacher because all of my friends wanted to be a teacher. It was not until I was admitted in the hospital that I developed my passion for nursing. But although nursing is my passion, I don’t plan on stopping there. I plan to go further and become an orthopedic doctor.

Do you feel satisfied with where you are in life? What are your aspirations? Where do you see yourself 10 years from now?

Yes, I do feel satisfied with where I am in life. Reason being, I am on the road to accomplishing my career. My main aim is to do the best I can to achieve good grades in school. In the next 10 years I see myself going to The University of the West Indies to accomplish my goal of becoming a medical doctor.

How does being a student reflect “Kim”?

A student nurse reflects the temperament of “Kim” based on her philosophies, “hard work and determination are the keys to success.” And, “with God all things are possible”. I believe that, without hard work, determination and God I could not have been a student nurse.

Who inspired you? Who are the people who impact your life the most?

As I stated before, nursing was a passion that I developed based on my experience, when I was admitted in the hospital at age 14, so the question is not who, but what has inspired me? My experience and wanting to be the one to ensure that no one has to encounter my experience. The persons who impacted my life are: my grandmother, my eldest sister, my high school nurse and Miss Sharon Small who is a member of JAAC.

How did you learn about JAAC? What do you know about them?

I learned about JAAC through my church. I know it is an organization that was form in 1986, with local and international members, who assist with health and education, internationally and in Jamaica, and the organisation comes to Jamaica every June to carry out their mission.

How has JAAC impacted your life?

JAAC has impacted my life in a major way by making my dream of walking without the use of crutches a reality and now they are making my dream of becoming a nurse come true. I am grateful to Dr. Una Morris for sponsoring my scholarship through JAAC.

What are some of your biggest accomplishments?

My biggest current accomplishment is being a University student, despite my challenges of being back and forth between surgeries and school. And my biggest past accomplishment is ranking 7th out of 73 students on my end of year examination after being out of school for a year due to my surgery in California, and I graduated from high school with a diploma.

Where does your family fall into all this? Your life? Your path? Your accomplishments?

My family has played a major role in my life, they are my supporting background and I remember, while growing up as a child, my grandmother said that failure is not an option if I want to be successful in life and I always ensured that I went to school. My eldest sister also plays a major role in my life as she is my mentor. She encouraged me to do well and dream big and to try my best to accomplish all my dreams in life.

How is nursing school so far?

Nursing school so far is a great experience and has taught me how to have a balance in life.