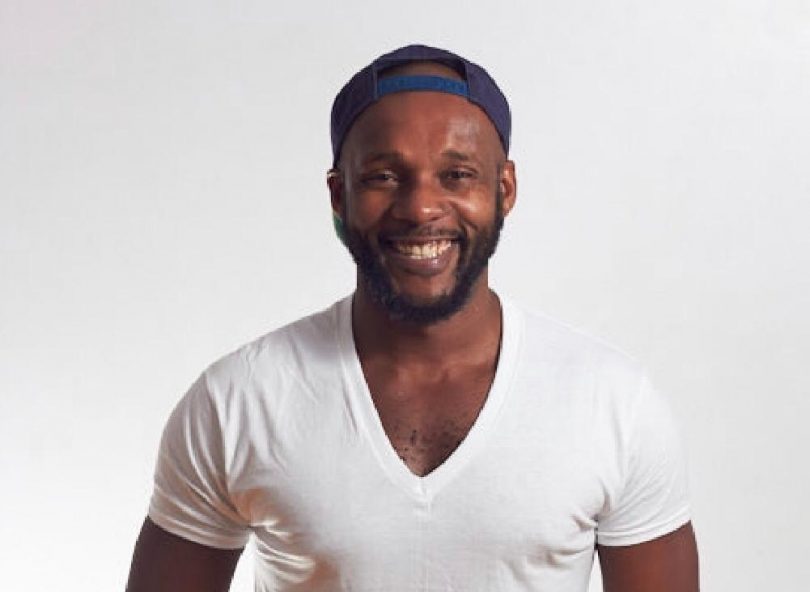 If you want to reconnect with memories from your childhood, you have to meet the newest talent who is taking over Instagram. Raul Blaze is a multitalented comedian whose work can be best described as nostalgic. His colorful commentary on all aspects of Jamaican culture will have you reminiscing, laughing, thinking, and dropping a foot at once. He is a writer, actor, educator, linguist, dancer, and cultural ambassador, who hopes to use his talents to help those suffering with depression. He sat down to give us some insight into his uniquely complex mind and his inspiration for the characters he plays.

Where are you from?

I rep Clarendon. Both of my parents grew up one mile away from each other in Smithville, but I was born at Spanish Town hospital. We moved a lot, so I went to several primary schools but I attended “The” Glenmuir High School.

Tell me a little about your name. How did you get the name Raul Guevara?

My mother named me Raul (pronounced “Rall”). It’s just a name she liked, so I was “Rawl” most of my life. As I grew older and started learning Spanish, I realized my name was in the Spanish books, so I when I went to University, I adopted the Spanish pronunciation. But people who knew me would still call me “RALLLL.” If anyone called me Ralll, I knew they were from May Pen.

I use the last name Guevara because I believe I am a revolutionary. I know I am talented and I’m here to do bigger things, and I want to do revolutionary things.

So tell me about your early childhood. How would people describe young Raul?

In high school, people would have described me as the class clown. I had a quiet side, but people never saw that. A lot of people who are funny are quiet and reserved in private. I was also a distance runner, who did well in track and field.

While in high school I felt that I had this “kind of thing,”  but I just did not know what was wrong. I knew I was up sometimes and then I could move to the polar opposite in no time.

I like to make people laugh, so even when I was sad, I tried to cheer other people up, because I knew what it felt like to be sad. So unconsciously, I wanted everyone to feel better.

It wasn’t until I got to UWI that I learned that I suffered from bipolar depression (the “kind of thing” finally had a name). In that moment, I decided that if I were ever given a platform, I would shed light on depression and what it means and how it feels.

There is a need for someone to speak out about this issue of depression in our community, because people need to hear and learn more. People suffer in the Caribbean and nobody talks about this. You can always put a bandage on a cut but not a bandage on depression.

So, what would you say to a parent whose child shows the signs you showed as a child?

I think depression is hereditary; it’s a serious illness. I tell people that the way to understand it is to imagine someone have someone die and going through that and getting better. Depression is like feeling that way for their entire life. My mother is a nurse, but I don’t think she identified it because no one saw the really sad part of me. The first time I started talking to my mom about my depression is when I was in my 20s. I told her about it when I was in Japan.

What’s something that people would be surprised to learn about you?

I speak Spanish, Japanese, and French.  People don’t know this, but I interpreted Spanish for years. When the Dominicans came to play volleyball in Jamaica, I was asked to interpret for them. I’m also a friendly envoy to Toyama Prefecture in Japan.

So Spanish and French? How?

Spanish was my first major at UWI an then I got an LLB. At UWI, mi did nuff, but at UWI people in my Spanish major class had French. You can only do French if you have A-levels in it. I didn’t have the resources to do French, but I did beginner French and to improve my French, I joined the French Club at UWI and started associating myself with the people who majored in French.

And Japanese? How did you learn Japanese?

I went to Japanese on the JET (Japanese Exchange and Teaching) program. JET is a very competitive program and people from all over the world apply.  Jamaica is one of the smallest countries that participates in JET. So, in 2011 I was selected to represent Jamaica and I went there to teach English and I stayed there for five years. I’m a friendly envoy to Toyama Prefecture. I was given that distinction because I lived there and contributed a lot to its culture and people.

The Japan experience was different. Listen, there is nothing that anyone can say that will prepare you for living in Japan. I can say I appreciated their respect for time. You can’t go to Japan with the Jamaican attitude towards time. The country is very clean, and you literally can experience the four seasons there. Winter is cold there and autumn is pretty. The one week that the cherry blossoms come out might be the most beautiful sight on earth.

Tell me more about your distinction as a friendly envoy to Toyama Perfecture.

Everyone who lives there has the option to be honorary. While there, I taught culture. I taught Kumina and my students learned about Jonkunu and Bob Marley. They all loved Usain Bolt. I cooked for an international festival. Mi represent Jamaica.

I’d like everyone to know that the Jamaicans in Japan are doing an excellent job at being ambassadors. There are Jamaicans there putting some serious work into culture.

I organized a thing called Spring Ting in Toyama and all the Jamaicans in Japan came to my prefecture to participate. It was a weekend of culture—sports day, ring game, Jonkunu, all that—a real cultural extravaganza. I did that to share more elements of Jamaican culture and to help people appreciate Jamaican culture, particularly in Japan.  Most times when people associate Jamaican things with Japan, they think about dancehall culture, so I wanted to share a different side of Jamaica with them. I plan to write a book about it.

How would you describe your comedy style?

Nostalgic. I am putting old things in the mainstream because the current generation will not understand. This is a form of preservation of the 90s.

How did you get your start in comedy?

I saw people doing these things on YouTube and Instagram. People who know me from high school and primary school told me for years to do this. Strangers have come to me and said I should’ve started this years ago. People like that I’m clean and clever. I started because I feel that if I don’t do these things, they’re gonna boil and burst within me. They’re crying to come out.

Now, I know anyone who watches your skits asks this one question: How do you come up with these characters?

Adrian is a little boy from country who isn’t a dunce, but he purposely twists things. He’s bright but he thinks in another league. He’s also a comedian, so he knows everybody will crack up when he goes up to present in class. He was around from last year but it was a slow start. I revived Adrian because I wanted to do a video, so I said what if I started to write a Spanish thing and use patois. That was the least effort I used and yet it has been seen on FB over 170,000 times.

Tanesha Goodaz is a ghetto girl who have ambition. If you asked, she would say she “very ambition.” She have ahr 191 call dem. She never solve nobody problem yet, but she still have the work. Tanesha is ghetto! No matter what happens to her, she will still be ghetto. She believe say she hot, so she nuh know say she pop down. Her best friend is Sketelesha Williams. Tanesha is inspired by my experiences growing up in Portmore and seeing some really interesting young girls like Tanesha. 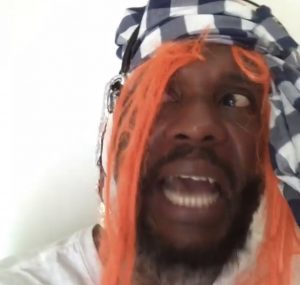 Jaqui Duphraetees is a legend. She came about from my days teaching at Wolmer’s. I met many Jaquis there. She has existed in my head for years. She is from Norbrook (Upper St. Aaaaandrew) and she married into wealth but can’t seem to accept that she wasn’t always “up deh,” so she frowns at people who are where she used to be, forgetting that she wasn’t born there. Everyone can relate to Jaqui as someone they’ve met before.  I plan to develop Jaqui some more because she’s a fan favorite and takes on a life of her own. Look out for more from Jaqui Duphraetees from Norbrook. 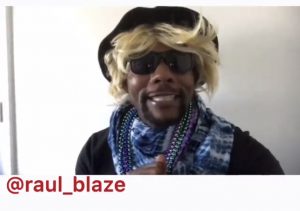 What do you say to people who question why comedians have to act like women to be funny?

The female characters aren’t the majority of my body of work. Comedy exists in all classes and genders. There are many who don’t have any female characters but it doesn’t matter what gender they are if you can bring across your character, it’s about the originality of the content. Humor is unisex.

Who are your heroes? Other than Che?

So tell us, what’s on your playlist?

What would you like to do with this platform you’ve created?

I hope to be a playwright so that when people hear about a play written by Raul Blaze, they come out. There are hundreds of plays in my head and I want to bring them to life.  I need actors and by next summer, I want to do my own plays. I’m excited about coming up with new characters. I wanted to start with plays and to bring attention to my plays, I started acting out these roles, but I love the writing part. I’ve been doing the videos for a year now.

There are people who suffer from depression and everything I do is for them. This is all dedicated to them. I know it can’t cure depression, but some of them might get up and look at my page and feel better. People have told me that and to hear that makes my day. I’m growing in confidence and when I hear about the different kinds of people laughing at my jokes, I feel humbled and motivated. These scripts have been written in my head for years. I have the ability to write stuff and store them in my head for years.

How do you want people to interpret what you do?

I want people to see that life can manifest itself in art. In everything we do, there is a way for art to represent it. My goal is to write screenplays. I want to do documentaries on poverty, on social issues, and on culture. I want people to understand suffering, but also celebrate culture and I want to represent these experiences in art. Most of all, though, I want to reflect humanity in everything I do.

Raul is certainly one to watch!