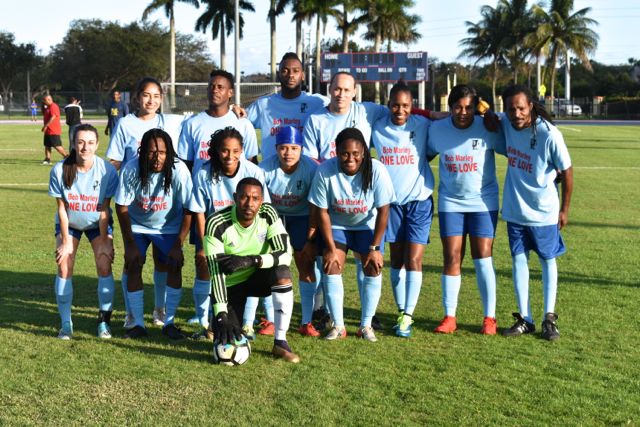 In conjunction with February marking Black History Month, the Ansin Sports Complex in Miramar, Florida played host to the ‘One Love’ Football Fun-Day Celebration to pay homage not only to the life and spirit of the legendary reggae King, Bob Marley, but also to his seeming lifelong love affair with the game of football itself.   And so then, on February 16th the event featured a trio of friendly football matches between the Reggae Girlz Invitational Team, Masters and Celebrities from out of Jamaica, as well as Florida based former National players.   What’s more, Cedella Marley—the daughter of the late reggae icon who spearheaded the resurgence of Jamaican women’s football all the way to France last year to compete in the FIFA World Cup tournament competition—was in attendance.  The City of Miramar’s Commissioner, Maxwell B. Chambers, along with Jamaica’s Consul General, Oliver Mair, were also on hand as part of the festivities.

And as far a music celebrities were concerned, Papa San, former dancehall hero turned minister, was on the scene milling about and greeting fans.  Meanwhile, Red Rat, another dancehall sensation from the 1990s laced up his cleats and took to the field to compete in a friendly match.  Rastafarian and conscious reggae singer, Iba Mahr, participated in one of the day’s later games.  Of course, all that running up-and-down, ball kicking, and goal scoring was aimed at uniting all participants in the name of Bob Marley’s ‘One Love’ Football Celebration.   Naturally, most reggae listeners and fans are familiar with the reggae legend’s internationally acclaimed music as a devout Rastafarian singer.  However, many are not that in tune with the Tuff Gong’s football playing and passion for the game.  The roots of Marley’s love affair with football can be traced back to the 1960s in Kingston, Jamaica.  That decade in Jamaican football—particularly at the high school level—was very special indeed.

In the 1960s, Kingston College (‘KC’) was a powerhouse in the sports of football, cricket, and track and field.  During that era, some of the most popular sportsmen in Jamaica came out of KC.  And in particular respect to football, KC outright dominated the Manning Cup football tournament competition on the island for a number of years.  In the year 1964, Kingston College made a high water-mark in that not since 1922 when Jamaica College did it, had a school won the coveted Boys’ Champs (track and field), Sunlight (cricket), Manning (football), while sharing cricket’s Spaulding Cup with Clarendon College. KC prevailed at Champs for the third straight year, and so too broke 6 of 13 records. In Manning Cup, the 1964 KC team scored a record 44 goals while conceding only two.   And KC’s all conquering 1965 football team is still to this day very much talked about.  Arguably, KC’s biggest and most talented top-star back then was none other than Alan ‘Skill’ Cole, Jamaica’s greatest footballer of all time.  ‘Skill’ Cole went to KC, and while there is teammates and contemporaries included the likes:  Neville ‘Sam Brown’ Oxford, Frank ‘Bowla’ Morant, Michael ‘Mouse Brown’ Vernon, Tony Keyes, and Trevor ‘Jumpy’ Harris.

But even before his days as a schoolboy footballer at KC, ‘Skill’ Cole was a forced to be reckoned with as as young 15 year old prodigy in Jamaica.  Cole then met Bob Marley at a Rastafarian elder’s home during the 1960s in the gritty Trenchtown neighborhood community of West Kingston, and the two soon thereafter forged a close and long-lasting friendship.  In fact, Cole became an integral member of the reggae legend’s inner circle, and also served as Marley’s road manager for the singer’s final tour in 1980.  And all throughout those years, Marley made connections with several of the aforementioned KC schoolboy legends while playing pick-up games of football.

In a Jamaica Gleaner article published over a decade ago on October 17, 2010 and written by Howard Campbell, the topic was for ‘Skill’ Cole to set the record straight on Bob through the release of Cole’s book.  As written in the story Cole stated: “they were jogging in Central Park on September 21 when the singer/songwriter [Bob Marley] suffered a seizure and collapsed. The remainder of the US tour was cancelled after Marley performed at the Stanley Theatre in Pittsburgh, Pennsylvania on September 23.”   “According to Cole, the suggestion to seek out Issels came from Trevor ‘Jumpy’ Harris, his former teammate at [KC] and Santos football club. He recalls paying a bell-hop at a New York City hotel to allow them to see the German doctor [Issels] who was attending a cancer symposium.” Bob Marley and Alan ‘Skill’ Cole back the days

In regard to KC ‘Ol Boy Tony Keyes, there was surely a close friendship since in later years he became Bob Marley’s personal dentist after graduating from Howard University in Washington D.C.  Dr. Keyes settled in the Silver Springs, Maryland area, and thus the KC element was not too far away any time Marley visted his mother, Cedella Booker, who was residing in Wilmington, Delaware (roughly 2 hours south via the I-95 expressway) during the 1970s.  As stated above, KC in 1964 also exposed itself as a track and field powerhouse to the world at the famous Penn Relays—which is the annual track and field competition held annually at the University of Pennsylvania’s Franklin Field in Philadelphia.  Every man who was part of that team had scholarship offers from major universities in the United States.  Dr. Keyes was among the four original 1964 relay team members.   He had scholarship offers in both track and football, but chose to play football at Michigan State University.

Indeed, Bob Marley’s football connection to Kingston College was a special one in that he became very close to many of their top stars while playing the game with them.  In that same Gleaner article Cole described his relationship with the late reggae icon as:  “A great, great friend. A confidant.”   And so it certainly wonderful to see the friendly football matches between the Reggae Girlz Invitational Team, Masters and Celebrities that took place at the Ansin Sports Complex in Miramar, Florida last month for the Bob Marley ‘One Love’ Football Fun-Day Celebration.  But, perhaps the most memorable moment was seeing the KC ‘Ol Boy, Trevor ‘Jumpy’ Harris, make his way through the entry gate to Miramar’s Ansin Sports Complex and then take his place in the stands to watch the lively action on the football pitch.

Photos (except for ‘Skill’ Cole and Bob Marley) by Nick Ford, who lives and works in South Florida.