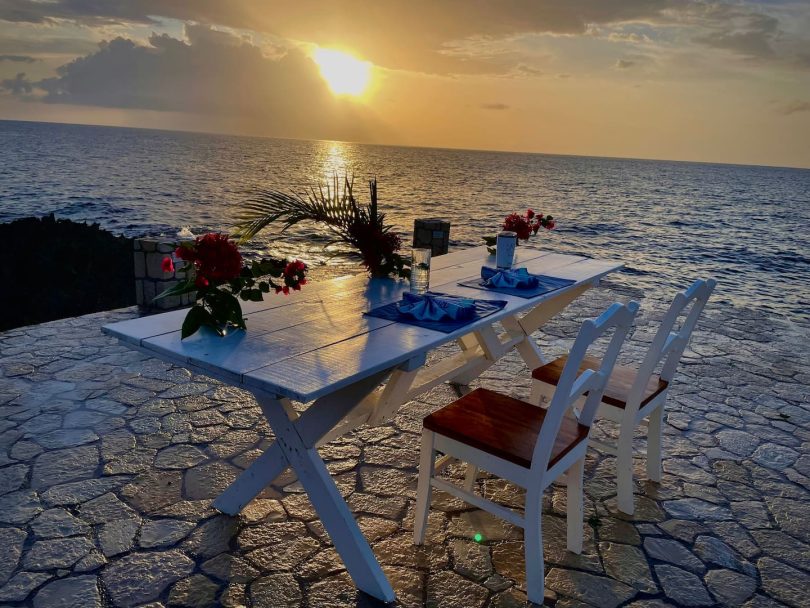 One of Airbnb’s noted propertieJas is set in seclusion, Poet Reef in Cousins Cove, Hanover, is best described as a fortress of solitude for those seeking calmness of Jamaica’s North coast without the steady stream of welcome tourists.

Hanover parish, it must be said, is often overshadowed, some would say, ‘squeezed out’ by its ‘bigger, more exciting’ siblings – the parishes of Westmoreland and St James. As a result, it takes on a one-horse town kinda vibe and is an easy blink-and-you’ll-miss-it experience if you’re driving along the North coast from say, Montego Bay to Negril.

This fact though, I think, gives the area its own undiscovered country feel, which the Poet’s Reef property is a perfect example of. 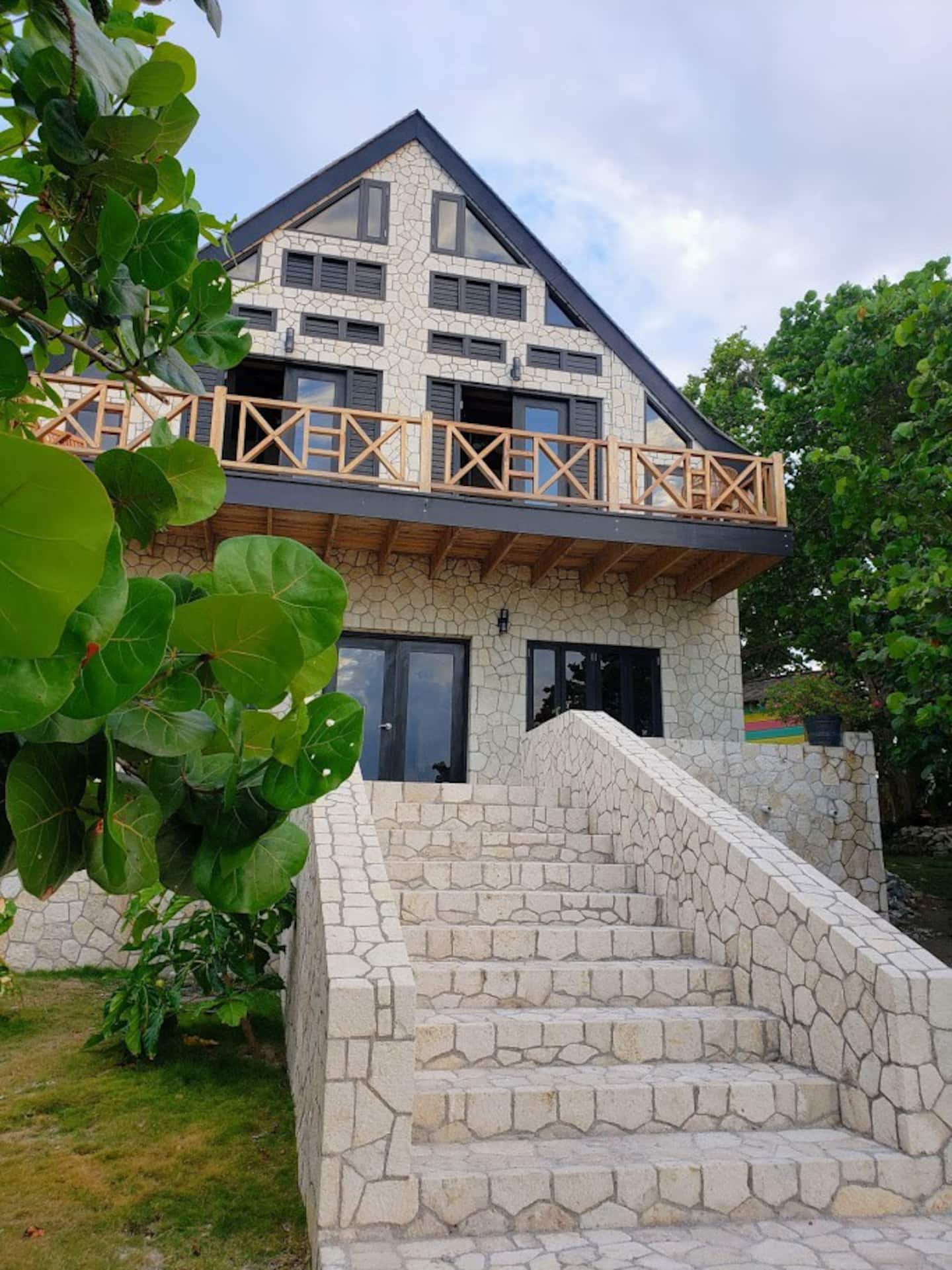 Firstly, let’s just talk about the place: it is magnificent. Breath-taking to look at by any description, it is like riding a rollercoaster while high on life. It is hewn out of local rock and as a result, the building stands like The Fort Knox of All Villas. Made with hand-cut rock, it is sturdy enough to weather any storm.

Reef’s ‘author’, is something of a Renaissance Man himself. Unashamedly vocal to all those who ask in his appreciation of all things Jamaican, the building stands as a personal love letter to the island. “There are no other places like this in Jamaica,” the owner and builder American Bart Muhs states proudly when we catch up with him during our stay. He later goes on to praise his father, Muhs Senior, who oversaw the construction of the family home.

A commercial-grade high spec stainless steel kitchen invites you to cook your own meals. We, however, decided to take on the charms of the on-site personal chef, who provided our meals daily.

Let it be noted that we stayed during the height of the third wave of Jamaica’s pandemic. The roads were, of course, empty getting there, so we took our own food to last us for the entire three days of our excursion. Although our provisions were more than sufficient we ordered some local snapper. As the daily light began to close in and the rolling curfew loomed, a meal was waiting for us as we
arrived. 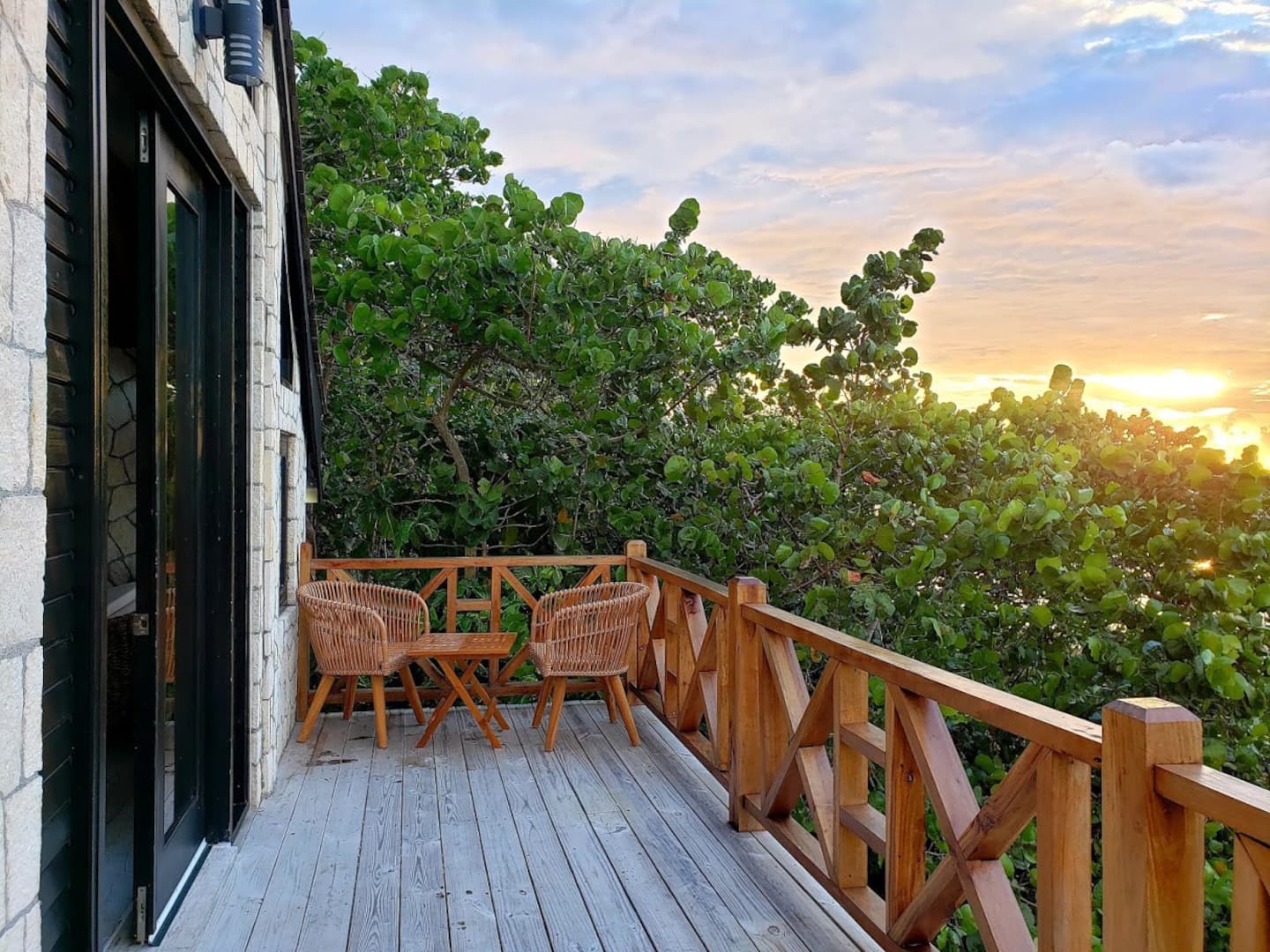 A three-day no-movement lockdown guaranteed that no retail outlets were available for the duration of our stay, so it was fortuitous that we came laden with shopping bags. That said, the concierge – Aaron, was happy to deal with any potential excitement. He ensured that all our basic needs were taken care of. Living
nearby but off-site meant that all we had to do was call.

But back to our surroundings. The robustly masculine architecture is a theme thoroughly replicated throughout the entire property. From the generations-steady granite brickwork to the angular lampshades standing in the open living space corner downstairs, you are met with a thoroughly contemporary space.

Think perfectly furnished living in any home in any one of the world’s ten richest capital cities.

That said, the feminine touches are apparent throughout the building too. These are mostly discovered through the local art staged about the place. From the ground floor wood carving of the headless pregnant lady complimenting the silent strength of the Blue Mahoe wood running everywhere throughout, it all shows that a woman’s finishing touch was never far away. 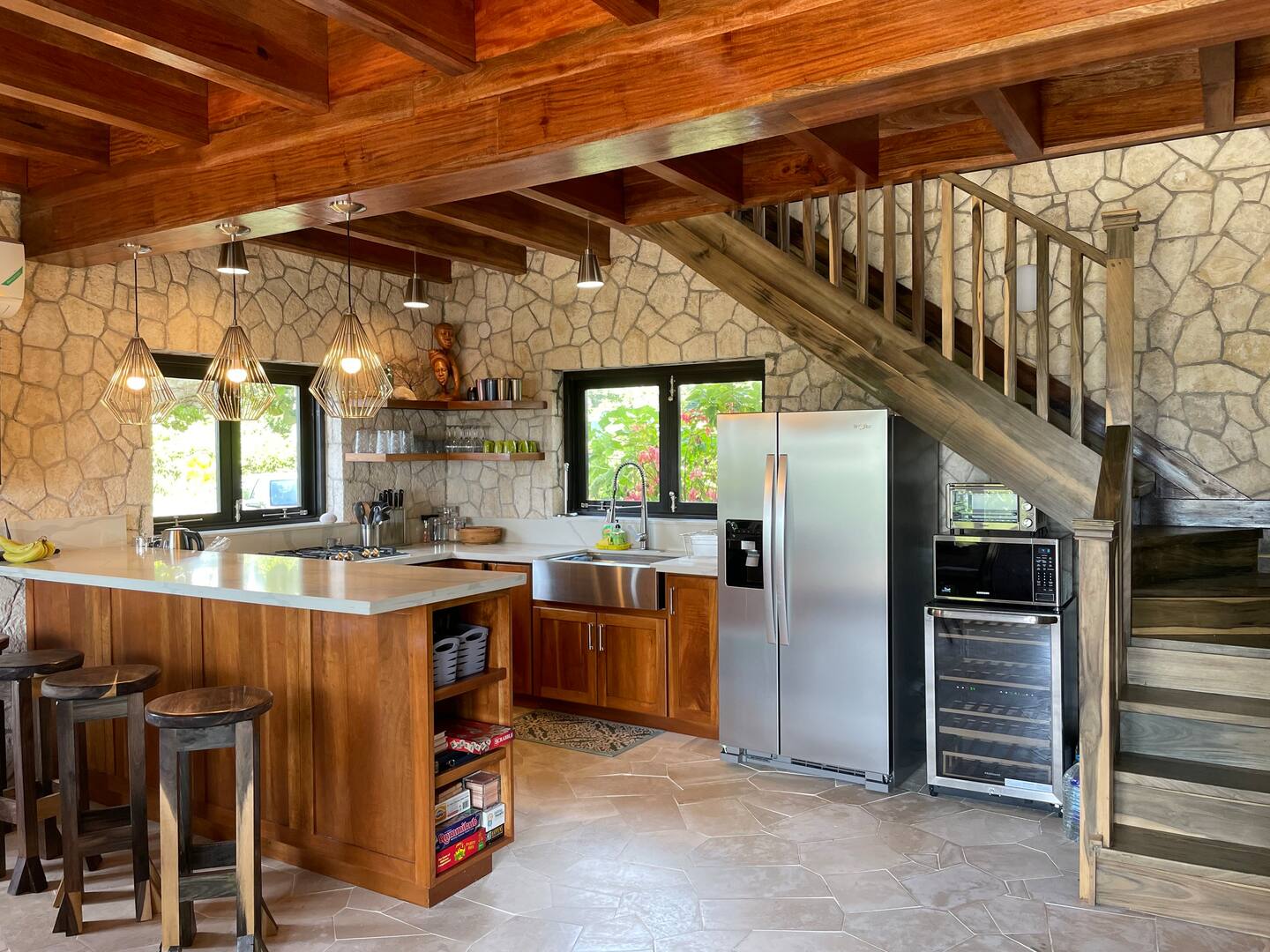 As Muhs happily recounts, “The Asian influences are there because of my wife: clean lines and minimalism is the key.” With ongoing plans for an outside sculpture by a local artisan called Mason, it’s clear that Muhs is keen to support the immediate parish community.

These subtle and not-so-subtle design features nestle comfortably with not only the surroundings but if you think about it, the island and its people. A curious combination of strength with a need to be seen. Like Jamaica, this house of wood on the water will be standing for countless generations to come.

With an upstairs attic room, perfect for at least four teenagers, and air-conditioning throughout the property, Reef not only presents itself as a great place to stay for families but because of its dramatic coastline profile, it is begging for a fashion or music video shoot. An idea, the owner remains open to.

In truth, although shy about the exact price of his rural hideaway – Muhs conservatively puts a cost upwards of US$500,000 and counting – this is firmly a family home. And every dollar shows. You will come as a guest and will be immediately welcomed in virtually as a new but distant relative. 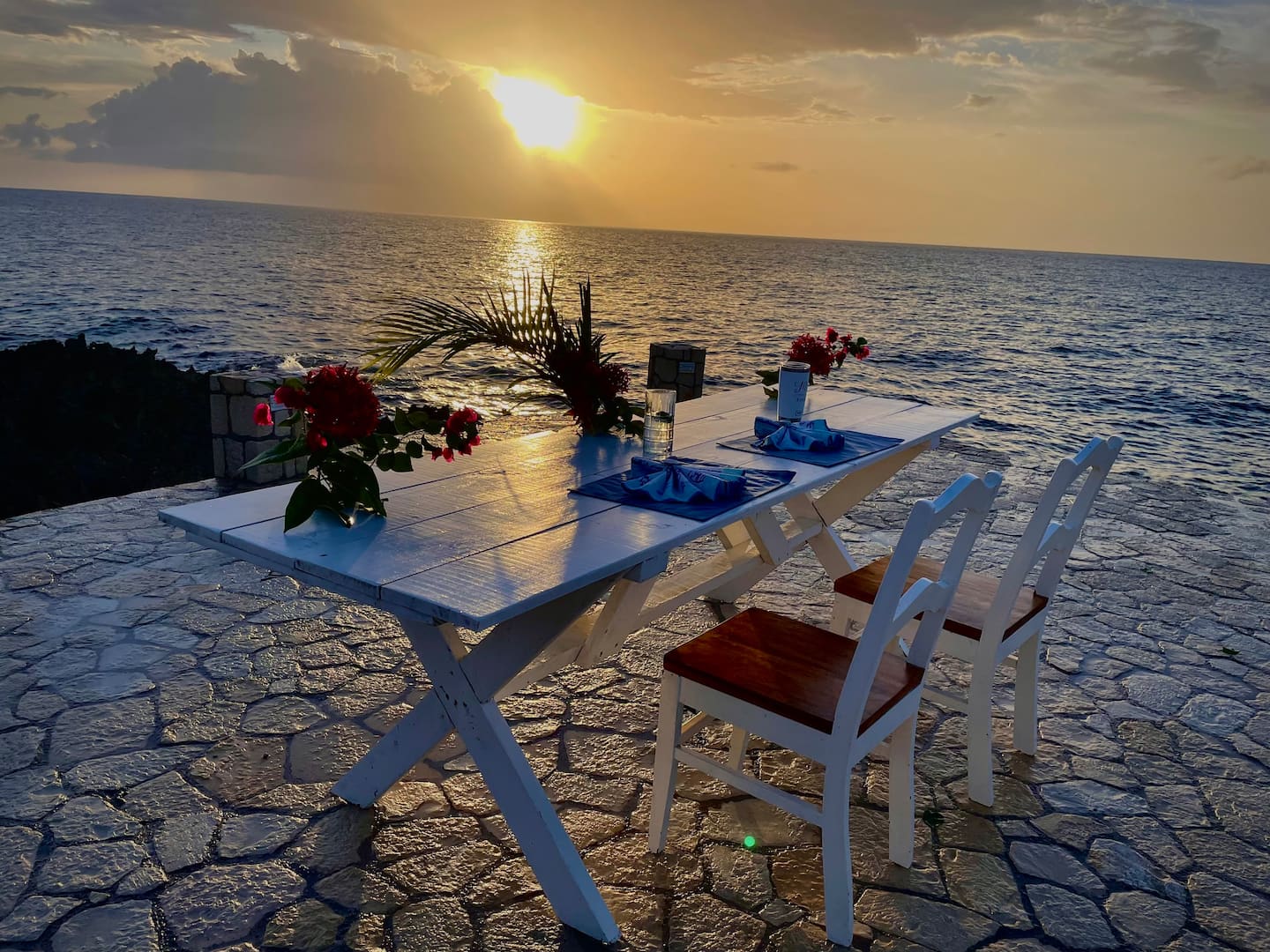 As the de facto biggest independent developer in the immediate area, Muhs’ regard and affection among the locals is heartfelt. He has, after all, helped create and provide sustainable employment for a network of artisans and local Jamaicans seeking gainful employment over the last few years.

So what is there to do once you reach Relaxation Central? Go snorkeling where you can see fish and other sea life thriving in untouched, crystal-clear blue waters. Don’t hesitate to jump and revel at the moment for as long as you can. Have dinner at sunset and spend hours birdwatching with your family or significant other.

From one of the two main Master Bedrooms, as you look out from the balcony, a 150-foot walkway – lit up at night- looks out to the Caribbean Sea. Your thoughts and privacy are securely protected. This is after all real Jamaican wellness therapy.