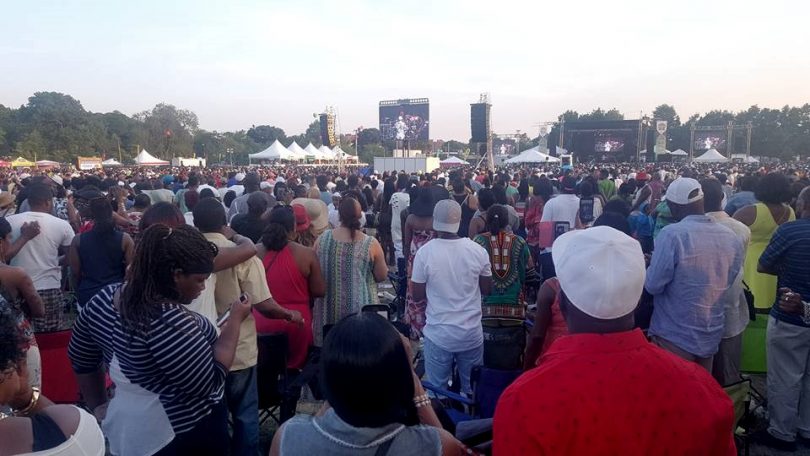 Another beautiful Sunday afternoon in Roy Wilkins Park saw thousands ‘Groovin In The Park’ on Sunday June 26 to the sounds of roots, rock, reggae, rocksteady, r&b, and ska.  The hot sun ray did not deter the patrons from enjoying the show.  Although I missed out on seeing two of my favorite performers Tessanne Chin and Duane Stephenson, in my mind they were on a Hide Away in August Town.

The colorful layout of tents and delectable dishes catered to the VIP, VVIP and Press from my vantage point was the crème de la crème of the day.  I had full access to roam the grounds momentarily and the vendors did not disappoint. In the heat of the day the smoke filled the air and the aroma was intoxicating.

Lithe, unassuming and the consummate entertainer, Beresford Hammond’s set by far was the curtain call.  As he strutted across the stage in his multicolored shirt and signature cap singing the crowd’s favorites No I Can’t, Come Back Home, She Loves Me Now, Sweetness, Pull It Up, I’m Hurting, Hit On Every Corner, Beres’ Step Aside, a do over by Season 5 ‘Voice’ winner Tessanne Chin was playful.  Chin who was front and center and Hammond’s former background vocalist was cajoled by him to the stage to share in the moment – definitely a crowd pleaser!

The show’s impressive lineup of stars included Toots and the Maytals with their euphoria of nostalgic selections – Never Grow Old, Pressure Drop, Sweet and Dandy, Bam Bam, Peace Perfect Peace, Country Road, and 54-46 stirred the lame and the lazy way back to the 60’s.  The icon’s vigor and boyish appearance proved why he is still in demand.

Famed dynamic duo R&B artists Regina Belle and Peabo Bryson stuck to tradition in their set with hits we know and love. Regina’s two crowd favorites Make It Like It Was and Baby Come To Me was the perfect entry for Peabo Bryson, who looked ‘spiffy’ in his black and white ensemble.  His vocals undeniably matched his recordings Tonight I Celebrate My Love For You, I’m So Into You, Feel The Fire, Falling In Love Ain’t Nobody, Can You Stop The Rain, coupled with his impeccable guitar skills to Just Another Day. In sync, their collaboration to A Whole New World ended in a beautiful waltz.

After waiting endlessly for Brian McKnight the final act, the crowd was reeled in to a conundrum!  The obvious glitch in the band change waned the patience of many patrons as empty seats in several areas became Brian’s audience.  It was obvious that Brian and his band were either blinded by the lighting or was skewed to quick thinking.  I Can’t Wait to Get Next To You, You Should Be Mine, and other selections were not the ideal songs to open to an already tepid audience.  However, a quick comeback of his 1997 hits Do I Ever Cross Your Mind and Back At One saved the curtain.

The production now in its 4th year has grown to acclaimed status. It was a great family affair staged by the organizers.  Congratulations are in order.  I have my recommendations for the 2017 artists’ lineup.  It will be quite a show.