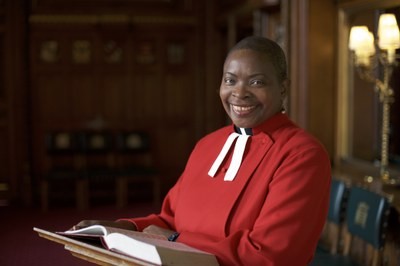 The Reverend Prebendary Rose Hudson-Wilkin, Chaplain to the Speaker of the House of Commons
and Chaplain to Her Majesty the Queen

The Reverend Prebendary Rose Hudson-Wilkin, Chaplain to the Speaker of the House of Commons and Chaplain to Her Majesty the Queen, will deliver the Distinguished UTech, Jamaica Public Lecture on the theme, Rebuilding Trust – Integrating and Restoring our Nation” on Wednesday, November 1, 2017.  The Lecture is scheduled for 6:00 pm at Lecture Theatre 50, Shared Facilities Complex, UTech, Ja. Papine campus.

Rev. Hudson-Wilkin notes that her lecture will “explore what I see as the contributing factors to the disintegration of our various communities: the breakdown of family life, crime, poverty, inequality and perceived injustices; to ask what role faith should be playing in rebuilding trust and the healing of the nation.”

Profile – “signal achievement as a woman of colour”

Born and raised in Montego Bay, Jamaica in 1961, Rev. Hudson-Wilkin in 1982, travelled to the UK to train at the Church Army College in the West Midlands following which she was ordained deacon in 1991 and ordained to the priesthood in 1994.

In March 2013, she was made a Prebendary of St Paul’s Cathedral in recognition of “her service to the Church, community and most recently as Chaplain to the Speaker of the House of Commons.”  In November 2014, she became the Priest in Charge of the city Church, St Mary-at-Hill near Monument.

She has previously served as a member of the General Synod of the Church of England and also as one of the Panel of Chairs of the Synod. She has twice represented the Church of England at the World Council of Churches (in Zimbabwe & Brazil) and is one of its representatives on the Anglican Consultative Council. She is often called on to preach in the colleges of Oxford and Cambridge and does numerous speaking engagements.

The University of Technology, Jamaica will confer the Honorary Doctor of Laws (Hon. LLD) degree on The Reverend Prebendary Rose Hudson-Wilkin at its Graduation Ceremony on Saturday, November 4, 2017 at the National Arena where she is being recognised for her signal achievement as a woman of colour.

The Distinguished Lecture is free of cost and is open to the public.