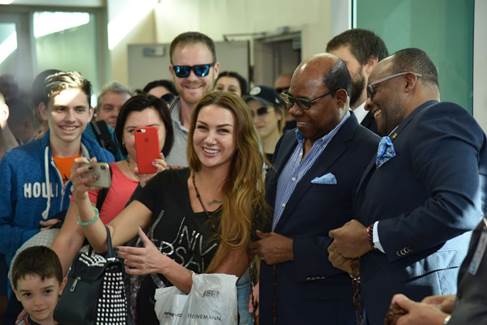 Edmund Bartlett, Jamaica’s Minister of Tourism, announced that tourists from Russia who enter Jamaica will no longer need to use visas. Bartlett made his remarks at Sangster International Airport when he was on hand to greet 300 Russians who traveled to the island on Nordwind Airlines’ inaugural flight from Moscow on October 26, 2018. Initially, Nordwind will make flights into Jamaica once every ten days. The decision to waive visas for Russian tourists was based on an agreement made between Jamaica and Russia in September 2018 in New York. Under the reciprocal agreement, after entering Jamaica without a visa requirement, Russian tourists will be allowed to stay for 90 days per year; likewise, Jamaican tourists visiting Russia will not have to use visas and will be allowed a 90-day stay in that country. It is hoped that the agreement will foster cultural exchange and business opportunities for the two countries. Bartlett noted the efforts of Kamina Johnson Smith, Jamaica’s Minister of Foreign Affairs and Foreign Trade, who signed the agreement with her counterpart from Russia at the 73rd session of the United Nations General Assembly in New York on September 27, 2018. The visa waiver is expected to facilitate more “people-to-people” exchanges and support tourism growth and opportunities for both Jamaica and Russia. Initially, Nordwind will make flights into Jamaica once every ten days. Bartlett noted that the government plans more visitor facilitation through making improvements in airport facilities, including in customs and immigration.

Nordwind Airlines began operation in 2008 with three aircraft traveling to six destinations. Since that time, the airline has expanded through its safety, quality service, and excellent hospitality. It is now among the Top 10 Russian airlines in regard to passenger turnover. The number of passengers on scheduled flights for 2017 was 3.5 times greater than the number transported in 2016, indicating the company’s sustained growth rate. Nordwind’s base location is Sheremetyevo, and its network includes over 200 destinations served by 500 flights per week. Each week, Nordwind transports 100,000 passengers to 58 cities in 12 nations.