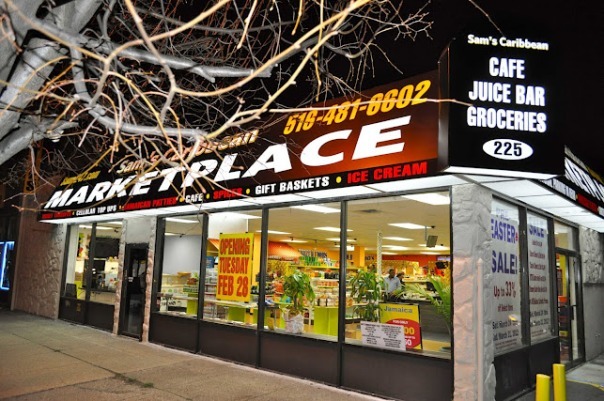 It is no easy task, especially in this slowly recovering economic climate, to celebrate twenty years in business.  However, that’s what had Sam’s Caribbean Marketplace buzzing on Saturday November 23, 2013, for their 20th anniversary meet, greet and customer appreciation breakfast-shopaganza, with selected merchandise rolled back to 1993 prices!

Shoppers and supporters in Long Island and surrounding areas were treated to a special free breakfast smorgasbord of mouthwatering Caribbean dishes in Sam’s new, spacious location at 225 Hempstead Turnpike, West Hempstead, NY.   Hundreds of shoppers took advantage of the rolled-back prices, packing baskets with their tins of Ackee – one half of Jamaica’s national dish – at $5.99, Sorrell for $1.99, D&G Sodas priced to go at 99c, flaky Jamaican patties for $1.25, and other roll-back items.

The venue was transformed into a shopping, eating and networking marketplace, coupled with great entertainment from the ADLIB Steel Orchestra.  There were select stations strategically placed  for showcasing  new brands like Narda’s Ginger Punch, a co sponsor of the event who used the opportunity to market her natural ginger-packed  fruit juice.  The product, a new addition to Sam’s inventory made its debut  at the anniversary event and proved to be a real treat to those who sampled it both hot and cold.  Other supporters and participants  included Kingston Korner Shop,  Delta Force Sound, E2G Solutions, GH Production, Street Hype Newspaper, Caribbean Food Delights, Hands On Media, Irie Jam Media and Dhall Events who all contributed to the presentation of a huge slice of Caribbean cuisine and culture.

Proprietors Andrew and Jean Morris along with their family were  gracious hosts, along with  their busy customer service representatives. They hardly had enough hands to cater to the consistent flood of eager shoppers and well-wishers.  In a very poignant touch, Sandra Gustard, aka Layde English, presented the Morris’ with their own special basket of Fountain Pimento Oil products as a thank-you for their support as the first retailer to carry her Pimento Oil line.  Andrew, an entrepreneur for the past twenty-odd years, has always nurtured fledgling manufacturers and other business owners and has mentored many whose products he brings to an increasingly appreciative customer base.

Sam’s Caribbean Marketplace in business for twenty years is committed to giving back to the community that has supported it throughout the years, and will continue to do so as the twenty-year celebrations continue through 2014.  Also partaking in the festivities, Keanu – Youth Chair of the Raise Them Up Campaign, spearheaded by A FeWe Culture and supported by Andrew Morris who is a participant in the upcoming global youth project.

Kudos to the normally anonymous Antoinette Pitcan at the helm of a tightly run ship who coordinated and organized an extremely smooth event.