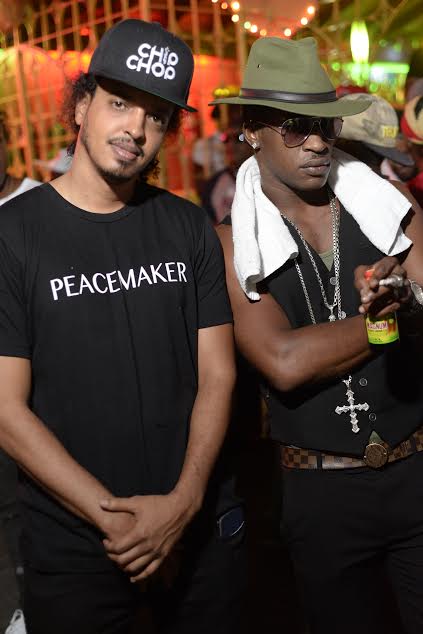 Dancehall fans can now enjoy another dance move and song from the enigmatic team that brought you Belleh and Chip Chop; Artiste and TV personality Sanjay and popular Dancehall Dancer Shelly Belly. The two have dropped a brand new single, ‘Tekova’, motivated by the dance move of the same name perpetuated by the Bermuda Squad. The two launched the single and dance move recently at the weekly ‘Weddy Weddy’ event held at the Stone Love Headquarters in Kingston.

With Belleh and Chip Chop already reaping some success, Sanjay believes those singles and dances have paved the way for Tekova to well….. take over!

“I believe Belleh and Chip Chop have set the stage and platform for TekOva to take things to another level, so I wouldn’t compare them in that way, each one builds on the momentum of the previous. The dance moves are also completely different in each and I personally find it easier to do Tekova as it is more user friendly to the ‘wanna be’ dancers such as myself.” Sanjay shared

Sanjay and Shelly Belly have found chemistry working on dancehall material together and have been going with the flow thus far, but the intention was never to create another dancing song right now.

“When Raccoon from Bermuda squad found this idea none, of us could deny how special it was. We decided to postpone our planned project and focus on Tekova as sometimes you have to just follow the magic.” Sanjay added

The two are hoping this single will take their careers to the next level, creating the impact through continued exposure they believe it is capable of having. They also intend to start shooting parts of the Tekova music video in short order and should have it completed by early October.

Sanjay is also putting finishing touches on his Reggae album that show the variation of his style from dancehall beats to slower grooves like his earlier single ‘Man Of My Word’.