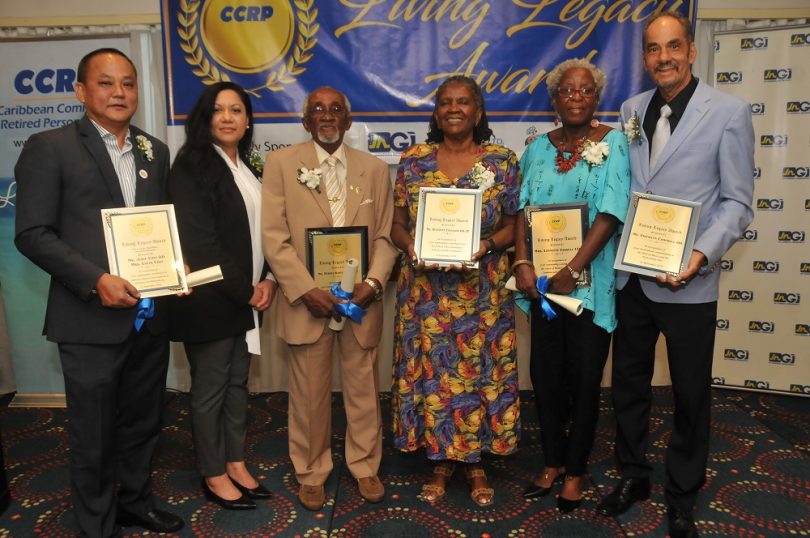 The awards and citations were presented by Prof. Sir Kenneth Hall, an Honorary Board Director of CCRP, and Lady Hall.

The honorees were lauded for innovating or initiating programmes of profound importance, going beyond the call of duty and displaying exemplary service and dedication in their fields of endeavour.

Hubert Bartholomew has journeyed over his 90 years from being a farm worker to becoming a Resident Magistrate and establishing his own law firm post-retirement. His philanthropic activities have extended far and wide. He and his wife were lauded by Special Olympics Caribbean CEO Lorna Bell for their support over several decades.

Fab 5 Co-founder Franklyn Campbell received kudos not only for his musical achievements but also for donating his time, talent and treasure to the upliftment of local and international organisations.

Founder of Juici Patties Jukie Chin and his wife Edith were jointly awarded the inaugural J. Lester Spaulding Award for entrepreneurship and philanthropy. The citation noted Jukie Chin’s path from his mother’s kitchen in Clarendon to the opening of 63 Juici Patties stores throughout Jamaica and the production and distribution of his famous items in Canada and the United Kingdom. Juici Patties runs an annual summer camp for youth and an extensive feeding programme with their staff members for the elderly.

Innovative Librarian Stephney Ferguson was praised for her introduction of a special educational programme for librarians which has been modeled in various universities and her seminal work with the National Library of Jamaica. The St. James-born Soroptomist is an ardent volunteer.

Activist and author Linnette Vassell played an important role in the eventual passing of the Maternal Leave with Pay Law in 1979 and has promoted the role of women in Jamaica’s development, authoring several publications on the subject. Her vote of thanks pointed to the unique value of every person in the room and every human being.

Speaking on behalf of the sponsors, JNGI Assistant General Manager for Operations Andrea Gordon-Martin expressed her Company’s commitment to supporting positive causes and congratulated CCRP on their initiatives.