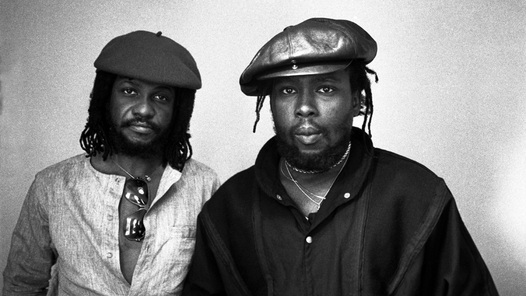 Sly and Rob have been called the most famous Jamaican rhythm section in history, and it’s not surprising, since they claim to have made 200,000 songs. Whether this is a real count or not, the drum-and-bass duo have created more music than is commonly recognized, and without them, popular music in Jamaica would have taken a different turn. The world outside Jamaica first became aware of the “Rhythm Twins” through Grace Jones or through their collaborations with the Rolling Stones, Herbie Hancock, Serge Gainsbourg, and Bob Dylan. In the reggae world, Sly Dunbar and Robbie Shakespeare created some controversy in the mid-1970s when backing Peter Tosh. The decade saw a series of hits by the duo on their Taxi recording label, which featured Gregory Isaacs, the Tamlins, Jimmy Riley and Junior Delgado. They were strong supporters of Black Uhuru and helped the group gain popularity after the death of reggae legend Bob Marley, which resulted in a reggae Grammy in 1985. Over the years, they have worked with Chakademus and Pliers, Beenie Man, Capleton and the Innocent Kru, Jamaican actress-singer Cherine Anderson and collaborated with the group No Doubt and singer Sinead O’Connor. The quality of their music has always remained high, regardless of the genre involved, and their talents are complementary. Dunbar’s drums and Shakespeare’s bass together represented the apex of rhythmic creativity.