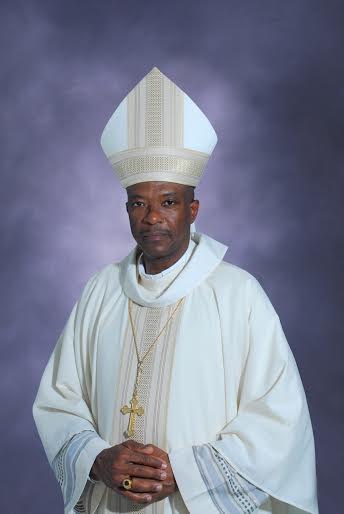 The St. Catherine High School (SCHS) Alumni Association congratulates alumnus, The Most Reverend Kenneth David Oswin Richards DD, on his appointment as Metropolitan Archbishop of Kingston and is proud that one of their own will now sit at the helm of the Catholic Church in Jamaica, Belize and the Cayman Islands.

Archbishop Kenneth Richards is the 7th person to be appointed in this revered position and the ceremony which was held yesterday at the Most Holy Trinity Cathedral was attended by many of his teachers, former classmates, current students and members of staff of his alma mater. A beaming Sharon Dale, Chairman of the Board of Governors of the SCHS, former head-girl and batch-mate of the Archbishop said the occasion was a milestone especially for the class of 1976 who was celebrating forty years as graduates with a batch-reunion. She said the occasion was the highlight of their week of celebratory activities which also attracted colleagues from abroad. Many of the Archbishop’s classmates, fellow alumni and well-wishers were bedecked in their school colors of white and blue and sported their school pins in solidarity with him. Some of his batch-mates fondly reminisced on their school-mate who literally towered over them, the avid basketball player who delighted them on the court and they swopped stories about the popular, friendly, hardworking student and music enthusiast with whom they shared their memorable school years.

She continued, ‘I do not think you can imagine the range of emotions we are all experiencing as we watch our own beloved brother assume such an elevated position in our church community. We can only imagine the satisfaction which Sister Mary Paschal, RSM, former Principal of the SCHS feels today as it was her vision which allowed boys to attend our school which began as  a traditional Catholic girls’ school.’

Principal Marlon Campbell soberly opined that the village of students, parents, teachers and wider community were responsible for the character, success and life’s work of the Archbishop and said that the school had truly come of age by sending graduates to serve in many areas of national and international life. He said these occasions provided opportunities for much goodwill among and towards the school community and that current students also had mentors from the alumni to inspire them to achieve personal and professional success.

‘When we see our Archbishop, our Prime Minister and our graduates both here at home and in the Diaspora, we are encouraged by their commitment to serve in various capacities and like our Founders Sister Mercedes and Father Ashe and former principal, Ms Madge Anderson and many others who have gone on before us, we have a responsibility to continue to give of our best. Today we all celebrate Sister Mary Paschal, Mrs Colleen Brown, Mrs Christabel Fuller, Mrs Joan Tyser-Mills who were all leaders of our village, the St Catherine High School.’

Jasmine Clarke-Barnes, President of the SE USA Chapter of the SCHS Alumni Association and a former class-mate of the Archbishop said, ‘We are not surprised by our brother’s appointment as he has shown that he was always a loving, relatable and responsible servant from school days and his winning personality and many gifts will continue to show us that he was born to serve and to give completely of himself to his people.’

The Archbishop will also be the Guest Speaker at the Gala of the North East USA Chapter of the SCHS Alumni Association on October 15 at the World Astoria Manor in New York where he will also be the Recipient of the Distinguished Alumni Award for 2016.

Service beyond self and duty to others are the precepts on which his personal ministry is built and Father Ken is known for the novel as well as traditional ways he serves his congregants and the wider community. It is well documented that he is truly the ‘People’s Priest’ who enjoys going  into  the inner-city communities during dancing hours, especially after midnight, to speak and share, offer comfort and prayers to his people and to work with them towards solving daily problems with which they are grappling. He is such a fixture at these events that if the Police are patrolling and glimpse the distinctively tall priest in his clerical garb, they know that all is well.

The Archbishop is a graduate of the St Michael’s Seminary, UWI and the Catholic University of America in Washington DC. He was appointed Bishop of St Johns Basseterre in 2011, Bishop in 2012 and has served in numerous capacities on many boards in Jamaica and in the region including his alma mater, The Convent of Mercy Academy, St Patrick’s and St Benedict’s Schools, St George’s College, Holy Trinity High, Station Pastor at the Mobile Reserve of the Jamaica Constabulary Force, The Institute of Jamaica, The Jamaica National Heritage Trust, The Jamaica Council of Churches as well as the regional leadership positions in Antigua, Barbuda, and St Kitts.
He continues to enjoy basketball, squash, motoring and listening to music and lists celebrating the Eucharist, preaching the gospel, counseling, especially marriage counseling and working with people as his favourite things.