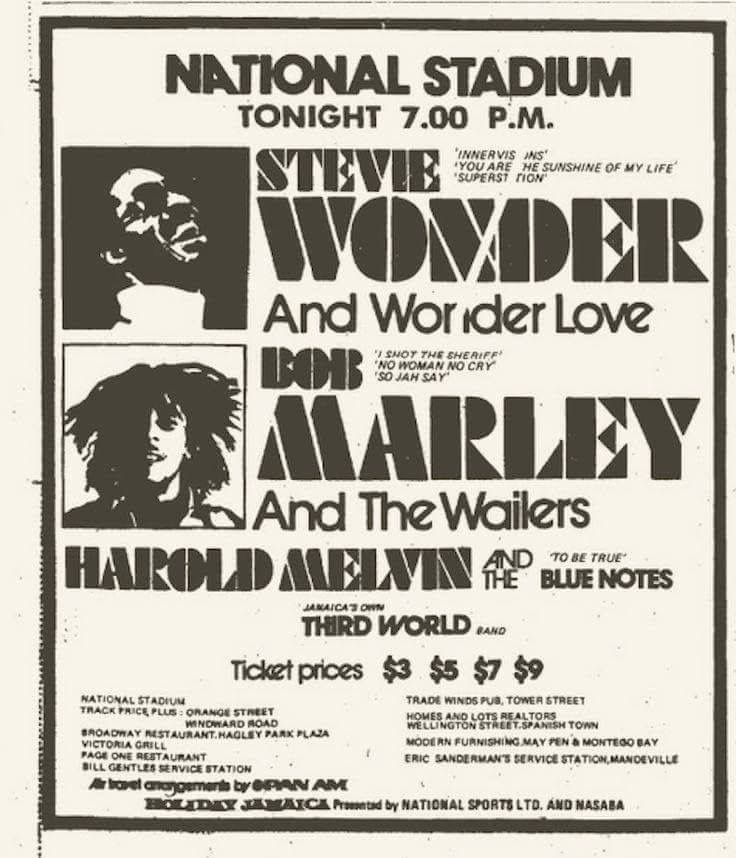 On October 4, 1975, the Wonder Dream Concert was held at National Stadium in Kingston, Jamaica. Bob Marley & The Wailers, Peter Tosh, and Bunny Wailer joined Stevie Wonder in what is sometimes called the Wailers Reunion Show. This was the first time that the original Wailers members had performed together since 1973. It was also the last time they would do so. In another memorable moment at the concert, The Wailers performed their original first hit “Simmer Down” from 1954 for the last time at this concert as well. The opening act was Third World. Harold Melvin & The Bluenotes were scheduled to play, but did not appear.

The Wailers played Rastaman Chant, Nice Time, Simmer Down, One Love, Dream Land, Fighting Against Convictions, Mark Of The Beast, You Can’t Blame The Youth, Legalize It, So Jah She, No Woman, No Cry, and Jah Live.

Stevie Wonder played Golden Lady/Too High, You And I, Too Shy To Say/As, All In Love Is Fair, Don’t You Worry ’bout A Thing, Drum Solo, Boogie On Reggae Woman, I Was Made to Love Her, Earth Angel, Ain’t Too Proud to Beg/I Heard It Through the Grapevine/Uptight (Everything’s Alright)/Respect/What’d I Say, My Cherie Amour, Fingertips, You Haven’t Done Nothin’, Living for the City, and You Are the Sunshine of My Life.

In his encore, Stevie Wonder called for Bob Marley to join him on the stage, and together they played “I Shot The Sheriff” and “Superstition.”

The concert was performed as a benefit for the Jamaican Institute for the Blind.