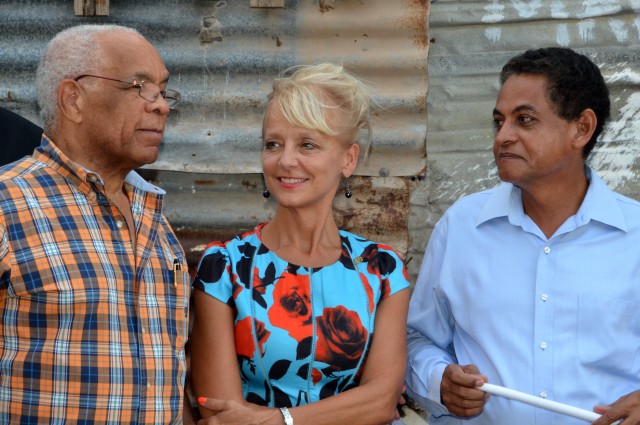 Residents of Fourth Street in Trench Town are delighted to receive a new solar street light installed in the community, through the Ministry of Local Government and Community Development.

The solar-powered light panel was handed over to the community at a meeting along the roadway on Friday (Aug. 7).

Nine Jamaica Public Service (JPS) street lights were also installed along the same street, which was without street lights for a few years.

Portfolio Minister, Hon. Noel Arscott, said this initiative forms part of efforts by his Ministry to reduce the dependence on the national electricity grid for the powering of street lights, thereby reducing electricity costs.

“We are trying to find a better solution, and hopefully as technology improves, we’ll find more ways to help reduce the cost of street lights,” he said, while adding that it cost the government in excess of $3 billion to operate streetlights.

“We hope to be able to put more in other parts of the community where there is a critical need and I am working on a programme to get more in some key areas,” he told a large turnout of residents from the area.

Member of Parliament for South St Andrew and Minister of Transport, Works and Housing, Hon. Dr. Omar Davies appealed to the residents to protect the new lights.

He added it was important that the street is lit so women and children can feel safer moving about the community.

“We need to ensure that people feel safe operating within their community. There can be no development if women fear walking along the street or students have difficulty going to school,” he said.

The project was organized in collaboration with the Agency for Inner-city Renewal (AIR).