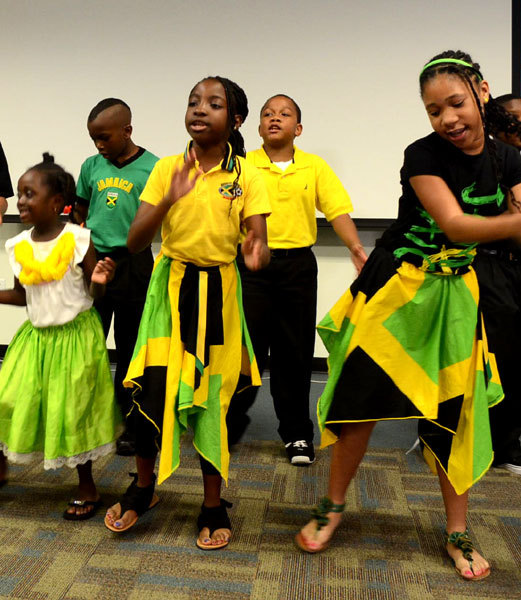 Independence is to black, green and gold as Jamaicans living abroad are to holding on dearly to their culture. If no other group of people is known all over the world for their global influence on music, food, fashion, and sports, it is Jamaica and the Jamaican Diaspora. As I reflect upon Jamaica’s Independence celebration in 1962, I am reminded of the high-spiritedness that accompanied it. Streets were filled with police and soldiers, marching bands and hoards of people on the sidewalk waving them along with their free black green and gold flags on a day that did not allow for rain, only for the hot, tropical sunshine. Little children held on tightly to their free enamel cups/mugs with the coat of arms printed boldly on them and with their eyes shining like the ackee seeds in the excitement of the hours of celebration.

It is now fifty years later and having migrated, I have the clearest picture in my mind. All of which comes as a direct result of not just knowing the paradise country in which I was raised and getting a great sense of loyalty to and through the Jamaican Diaspora but also having returned as often as possible to recapture more of what we knew as that part of ‘Sweet, sweet Jamaica’. Since the beginning of the New Year, 2012, all forms of celebration started to take place in North America, marking the year in which Jamaica would be celebrating fifty years as an independent nation from colonialism and British rule. Many predominantly-Caribbean/Jamaican churches had church services, placing Jamaica in God’s hands to protect the island nation from danger, harm, crime and governmental mismanagement. Monthly events depicted the independence because many were coming home to witness and be a part of the actual celebrations in August, come high seas or low.

February generally marks Black history month in the United States of America. Jamaicans make this work to their advantage making certain that we let people know that the first Black-owned/operated newspaper in the US, Freedom’s Journal, was conceived in 1827, before the abolition of slavery, by a Black slave whose mother was a slave and whose father was his mother’s ‘owner’. He came from Portland, Jamaica and got a college education way before the Emancipation of slavery. His name is John Brown Russwurm.

March: Women’s month and Jamaicans go all out to celebrate their women particularly those who are leaders. One church in particular successfully hosted an event ‘Transforming the soul of the city through women leaders and the men who love and respect their dignity’. The Consulates and Embassies also make preparations and hosts events for upcoming August. April set the stage for National Poetry Month andsome prolific Jamaican writers. Within the Diapsora, Mother’s day is all of the month of May.

June: Caribbean-American Heritage Month and again, Jamaica dominates the scene here. Either that or everybody wants to be Jamaican. They will even tell you that they are from a known, particular district till you ask them if they know Miss Daphne. That is the big tell all. People take such pride in being Jamaican that it tells me that we should also take care in being proud to be Jamaican. July has Canada, the US, Jamaica and the United Kingdom joined as one in the annual Day of Prayer and Fasting for the amelioration of Jamaica.

There is a sweet simplicity that Jamaicans have that creates a kind of curiosity within those around us both at home and wherever we call home. Dominoes and a Red Stripe make people wonder and draw them closer to our culture. It has been that way throughout history. We have our own flavours and colours and we don’t give them up too readily even when we become citizens of other countries. We have a ‘can do’ mentality that is even more enhanced when we see opportunities more readily available to us abroad, than we had at home. Bob sledding – that’s Jamaican.

All over the world, wherever a Jamaican is present, you can readily identify him with his car seat and head rest carefully wrapped with a cover designed with a Jamaican flag, the little boxing gloves, football boots and air freshener hanging from the mirror also with the Jamaican flag colors; his keychain, tee-shirt, can opener, even winter scarves, Clarke’s booty, socks, wristband and cap will carry his patriotism. I have even witnessed a personalized license plate – Guinegog. That’s Jamaican. When you believe you have seen it all, take another look at the ‘Lion of Judah’ decals on almost every single bumper sticker. Humbly speaking, I sometimes believe that Jamaicans abroad celebrate Jamaica more than Jamaicans at home ever can. Check out the Jamaican-speaking GPS. Who can top that? I guarantee you will return home trying to obtain one in addition to the one you already have…just to hear Jamaican. It is a sobering experience. It is Jamaican.

We hug up the culture, tight tight and when August comes you can’t shake we because wi nah budge nat even if yuh pull we by wi rasta calla belt. Go on Jamaica! Go on Jamaicans. Throughout theses fifty years we have learned some hard lessons, overcome some great social and economic obstacles and have been victorious in many areas of life but we strive constantly because we have the intestinal fortitude to forge on for fifty times fifty more years and then some, while we move and reshape anything that may be in our way to sweet success and jubilation.

Happy Fiftieth Independence, Jamaica and Jamaicans who made it possible both at home and wherever we now call home.