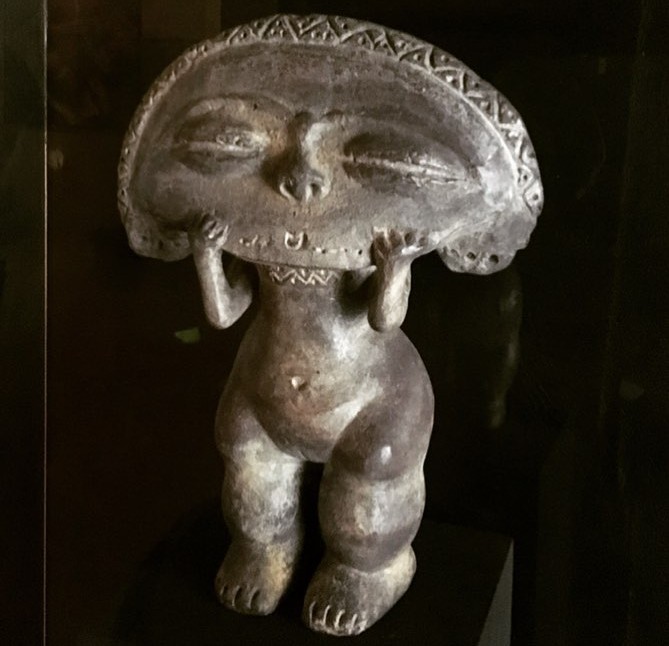 The prehistory of Jamaica saw three separate waves of colonization by Amerindian peoples. Somewhere between 5,000 BC and 4,000 BC saw the arrival of the Guanahatabey or Ciboney people, who followed a now submerged chain of small islands that used to run from the eastern Yucatan through to Cuba and Jamaica. They were a cave-dwelling people, who used basic tools for fishing and gathering. At the time of Columbus’ arrival, the Guanahatabey were recorded as still surviving in western Cuba.

Next upon the scene were the Saladoid or Igneris people, who arrived around 300 AD; they were the first wave of Arawakan peoples to come from South America. The Saladoids brought with them their skill in fine ceramics, shards of which still turn up around the Island today.

The third wave saw the arrival of Arawakan people now known as the Taino, who came originally from the Orinoco region in Venezuela, between 650 AD and 900 AD. They reached Jamaica via the Dominican Republic and soon absorbed the Saladoid culture into their own. The Tainos enslaved the Saladoids, making them a labouring underclass that was denied Taino luxuries such as hammocks and cassava. The Spanish later noted this ‘underclass’ calling them the Naborias.

By the time of Columbus’s arrival in 1494 the Jamaican Tainos were part of approximately 6 million Arawakan speaking people of the Greater Antilles and the Bahamas (where they were known as the Lucayans). They knew Jamaica as ‘Yamaye’, the land of springs.

Jamaica had over 200 village sites ruled by chiefs or caciques. The South coast of Jamaica was the most populated area at the time, especially around what is now Old Harbour. The Jamaican Taino were master carvers, producing many carved artifacts, including the Dujo a low wooden ceremonial stool used by caciques, and were well regarded for their skills with the bow and arrow, they hunted with a small barkless dog they kept as pets. From the local ginup fruit they extracted a black dye to paint their skin and a red dye from the Anatto seed making them look most fearful to their enemies. The Taino did not wear clothing, except for a small apron worn by married women; they lived in huts made of woven cane, round ones (bohios) for the general population, square ones (caneyes) for the caciques.

Like the Mayan, the Taino also practiced head shaping, whereby at birth children had their heads bound to flatten their foreheads. Nose and ear piercing was also popular. The Tainos commonly played a ball game similar to that played in Central America called Batey. Their diet consisted mainly of seafood and cassava. They had a complex animist spirituality, worshipping Zemis or carved wooden gods and believed in Hupias or Opiyes, spirits of the dead, who roamed the night.The Jamaican word ‘duppy’ most likely stems from this word. Shamanistic states of mind in religious ceremonies were achieved by inhaling the powerful hallucinogenic Cohoba bark.

Columbus learnt of Jamaica from the Taino in Cuba, however when he first tried to land on the North Coast over 40 war canoes repelled him. He next landed on the South Coast at Cow Bay (named after the numerous manatees found there). Here Columbus was greeted by a cacique who Columbus considered “the most intelligent and civilized cacique in the Antilles”, both he and his warriors were splendidly dressed in bright feathered cloaks and head dress with ornaments, made of semiprecious stones, around their necks and on their foreheads, their faces and bodies painted with various colours.

However, this cordial relationship was not to last. The Taino were the first people of the New World to encounter the Europeans as they expanded westwards, and soon were to face harsh slavery and virtual extinction. However they were not fully exterminated, as history has led us to believe. In 1655 when the English expelled the Spaniards, Tainos were still recorded as living in Jamaica. It was noted at this time that rural farmers spoke a dialect that was mixture of Spanish, Taino and African languages. Later archaeologists were to discover English lead shot amongst Taino artifacts, and almost 60 years earlier in 1596 English privateer Sir Anthony Shirley sacked St. Jago de la Vega (later Spanish Town), after being guided there by Taino tribesmen. Further archaeological finds were later to confirm that Taino extinction was a myth, although being enslaved and cruelly treated by Europeans, some Taino did survive. Many escaped into the mountains to co-exist with the Maroons, where still today many non-African plants are used medicinally, plants that were once part of the Taino pharmacology. Hammocks also are still made in Accompong in the Taino fashion, proving that the Taino still survived for many years after the Spanish had left, with the Maroons in the mountains of inland Jamaica.

In Jamaica today petroglyphs found around the Island are a poignant reminder of these early people. The museum at White Marl, outside of Spanish Town, has a good collection of Taino artifacts on permanent display.

Did you Know – Taino words in common use today include : Tobacco, Canoe, Hammock, Barbecue, Hurricane

About Glenn Woodley
Australian born artist and writer Glenn Woodley grew up in St. Catherine, Jamaica, where he attended Trinity Prep School, Linstead, then DeCarteret College, Mandeville in the 1960s. Glenn then went on to the National Art School in Australia. He is also a caver, with a great interest in illustration, cave art, history and all things Jamaican. His work has been exhibited worldwide. Glenn now lives in rural New South Wales, Australia, with his wife, children, 2 dogs, a cat, and numerous kangaroos.

SITE NOTE: Glenn has graciously offered to post his email address in the event serious questions or comments are directed his way. Please respect his offer. Please remove the word JCAN from the email address to contact him – [email protected]

More of Glenn’s work can be seen at http://artshack.tripod.com