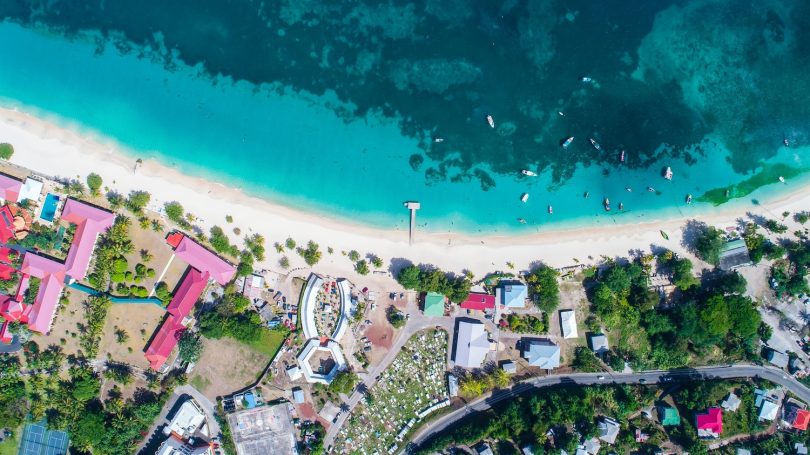 Grenada is located at the southern end of the chain of Grenadine Islands in the Caribbean. It includes the island of Grenada and six smaller islands. Grenada is known as the “Island of Spice” in reference to its production of nutmeg and mace. Prior to the arrival of Europeans, the island was home to Arawaks and Caribs. Europeans made several attempts at colonizing Grenada, but were repelled by the indigenous peoples for some time. Settlement and colonization by the French began in 1650 and continued for some 100 years. The island became a property of the British in 1763, and Britain continued to rule until 1974. From 1958 to 1962, it formed part of the Federation of the West Indies, but in March 1967, Grenada became fully autonomous over its internal affairs. It became a sovereign state in February 1974, but did not break formal ties with the British Commonwealth until 1979, when the People’s Revolutionary Government led by Maurice Bishop as Prime Minister ended British rule.

Grenada offers the same tropical delights as other Caribbean islands, including soft sand beaches, diving sites, and similar attractions for tourists. Its smaller islands provide more unique experiences.  St. George, the capital city, has been described as the most beautiful of the Caribbean harbor towns.  Below are ten of the country’s most popular tourist attractions.

This beach has been described as “the granddaddy” of it island’s 45 beaches. It features a two-mile-long expanse of white sand beach that overlooks a lovely bay marked by colorful fishing boats. There are many hotels, restaurants, and excellent shopping offered here.

In addition to beaches, Grenada offers a variety of nature hiking trails at Grand Etang National Park and Forest Reserve. This area covers a large part of central Grenada and is home to many varieties of exotic wildlife, including armadillo, mona monkeys, and tropical mockingbirds. The region of Mount Qua Qua is famous for its stunning views of the surrounding parkland at Grand Etang Lake. One of the most popular hikes takes visitors to Seven Sisters Falls.

This rum distillery has been creating rum since 1785. It is the oldest water-powered distillery in the Caribbean. Guided tours are available and take visitors through the entire rum-making process from the harvesting of sugar cane to fermentation to bottling. Following the tour, visitors receive free samples of the rum, which is extremely strong.

4. Diving
Grenada offers diving enthusiasts some excellent underwater adventures. There are over 30 dive sites off the coasts of the island where divers can visit shipwrecks and coral reefs.  The Bianca C Shipwreck is an especially popular destination. This cruise liner sank in 1961 and its wreck is known as the “Titanic of the Caribbean/” Flamingo Bay provides divers with the chance to swim among coral reefs and abundant exotic marine life. The Underwater Sculpture Park offers a unique experience at the bottom of Moliniere Bay in St. George. The park features sculptures depicting scenes from Grenada’s culture and folklore.

5. Belmont Estate
This estate features one of the island’s popular spice tours. A 300-year-old plantation that specializes in spices like ginger, pimento, turmeric, and nutmeg. Visitors can see the spices being processed and then walk through the property’s 400 acres, which includes gardens, a goat milk farm, and a museum.

6. Market Square
Located in the capital city, the market has everything locals and visitors alike could want. There are local crafts, fresh fruits and vegetables, and spices on offer. The spice market has been called “the best smelling place in the world.” The best time to visit the market is on weekends, especially on Saturday when the area is bustling with vendors and shoppers.

This former plantation is a favorite with nature lovers. It is located along a private estuary and features some of the best birdwatching opportunities in Grenada. The area is home to unique species of birds, including the Caribbean coot, the green-back heron, and the northern Jacuna. There is also a beautiful beach to tempt visitors and many hiking trails, along with a small hotel and excellent restaurant.

Located just north of the main island, these two islets are less frequently visited by tourists, but feature several small hotels, restaurants, and a local museum. Carriacou is a good place to see the true Grenadian culture as it hosts events like the Carriacou Carnival and the Carriacou Regatta, which showcase local music and sailing. Petit Martinique offers a true desert-island getaway with its lovely and uncrowded beaches.

A tour of Spice Plantation lasts four to five hours and takes visitors to the picturesque fishing village of Gouyave, where there is a spice processing factor and nutmeg processing station. The tour moves into the mountains to the Belvedere Plantation where visitors can sample fresh Grenadian bananas. A swim at Concord Falls is included in this popular venue.

A factory tour of the Grenada Chocolate Company near the Belmont Estate is also available, and tourists can see the entire chocolate-making process, from the cracking of cocoa plant pods to the molding of chocolate cars. Free samples and chocolate products for sale are available.

Photo by Hugh Whyte on Unsplash