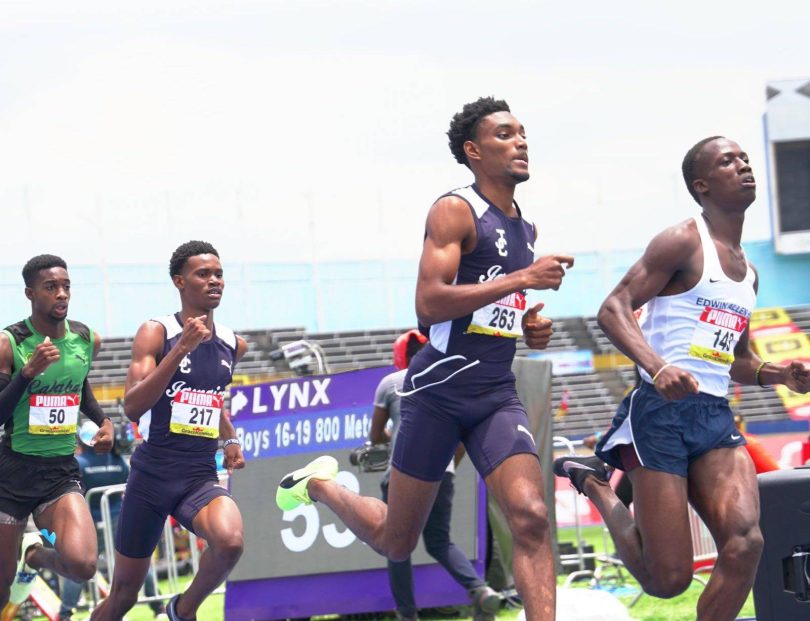 Excitement was in the air as the GraceKennedy (GK) team joined the Inter-Secondary Schools Sports Association (ISSA) and other stakeholders at this morning’s launch of the 2022 ISSA/GraceKennedy Boys’ and Girls’ Championships (Champs) at the National Stadium in Kingston. The launch, which was live broadcasted on television and streamed online by TVJ, kicked this year’s Champs programme into high gear for the GK team, who came decked out in their bright red GK100 shirts, as their celebration of the Group’s 100th anniversary continues.

Addressing the audience at the launch Group CEO Don Wehby expressed that he was thrilled to see the return of spectators to Champs this year. During his remarks Mr Wehby announced that in celebration of their 100th anniversary this year, GK will be giving out an extra special award at Champs – The GK100 metre Award.  “The winner of each class of the 100m finals – seven winners in all – will receive an educational grant valued at J$100,000. We will also award each winners’ school a J$100,000 grant to invest in school-upliftment project, which is to be chosen by their Champs team.  Similarly, the winning teams for the 4x100m – seven classes total – and their school will also receive a J$100,000 grant,” he explained.

CEO of the GK Financial Group (GKFG) and President & CEO of the GraceKennedy Money Services (GKMS) Group, Grace Burnett, CEO of GK Foods – Domestic, Frank James, and President & CEO of First Global Bank (FGB), Mariame McIntosh Robinson, who are associate sponsors of Champs, also delivered remarks at the launch, highlighting the activities their GK subsidiaries have planned for its 2022 staging. These include the GKMS Champs Game Show which will be streamed across all GKMS social media platforms, the Move Like A Champ Treasure Hunt and Move Like A Champ School Spirit Promotion from Grace Foods, the latter of which will reward 175 lucky students from Champs participating schools tablets and nutritional support for their schools. Thanks to FGB in 2022 Champs will also be ‘cashless’, as patrons will be able to use an electronic payment portal powered by FGB to purchase tickets for the event online.

“On your mark, get set, pay! with your FGB credit cards and unlock double rewards points,” exclaimed FGB President & CEO Mariame Robinson at the launch.

In 2022, GK’s sponsorship of Boys’ and Girls’ Champs, totals over J$88 million explained Wehby. “We see this as a major investment in nation-building which underlies GK’s long-term commitment to Jamaica. It’s an investment in our youth, our schools, sports development, and our country,” he continued. 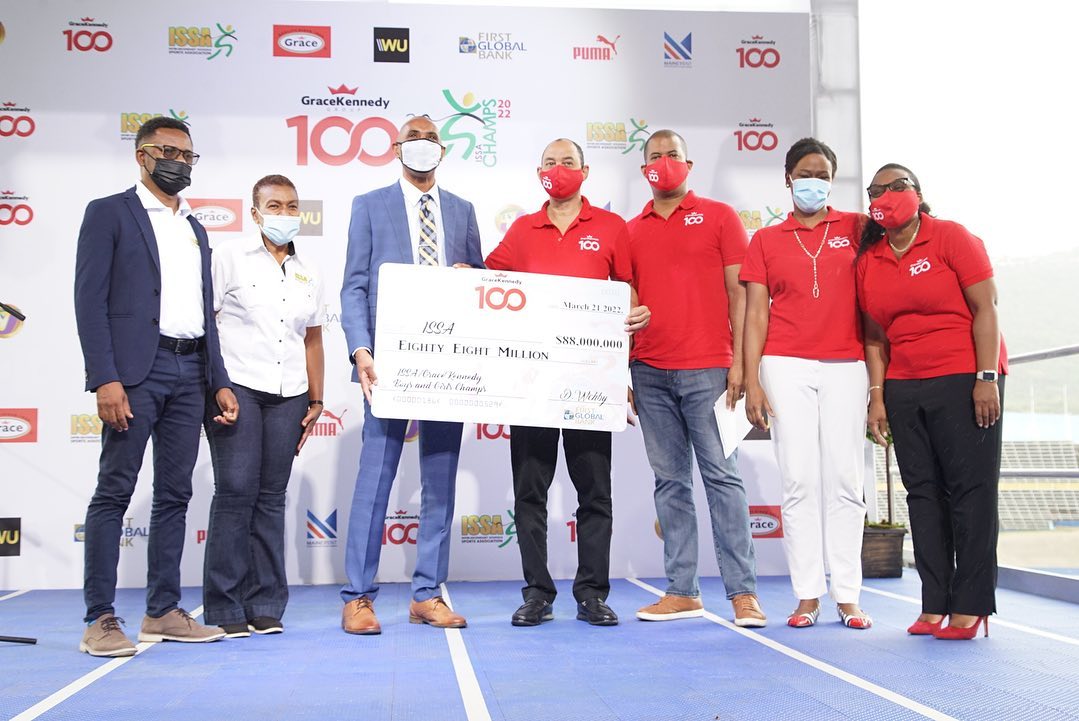 L-R: Chairman of the ISSA Boys & Girls Champs Committee, Richard Thompson and Colleen Montague, Vice President of ISSA joined ISSA President, Keith Wellington in receiving a cheque for J$88 million from Don Wehby, Group CEO at the 2022 Champs launch on March 21 at the National Stadium. Frank James, CEO of GK Foods – Domestic, Mariame McIntosh Robinson, President & CEO of FGB and Grace Burnett, CEO of GKFG and President & CEO of GKMS, who are associate sponsors of the event, also joined in the handover.

Wehby also used the platform of the launch to advocate for an independent medical panel for student athletes with injuries, stating that ultimately, the safety and well-being of Champs athletes should always be of paramount importance. Echoing the sentiments of ISSA’s President, Keith Wellington, Wehby also underscored the importance of continuing to maintain the COVID-19 protocols at Champs this year, in the interest of the safety of all involved. “We must continue to remain vigilant in our efforts keep the virus at bay, as we work together to beat this devastating disease once and for all,” he said.

Wehby commended ISSA for having the vision, determination, and drive to lead Champs year after year, “Thank you for all that you do to make this event a success. To say that I am excited to be celebrating GK100 at Champs this year with you all, would be an understatement. I am truly ecstatic.” 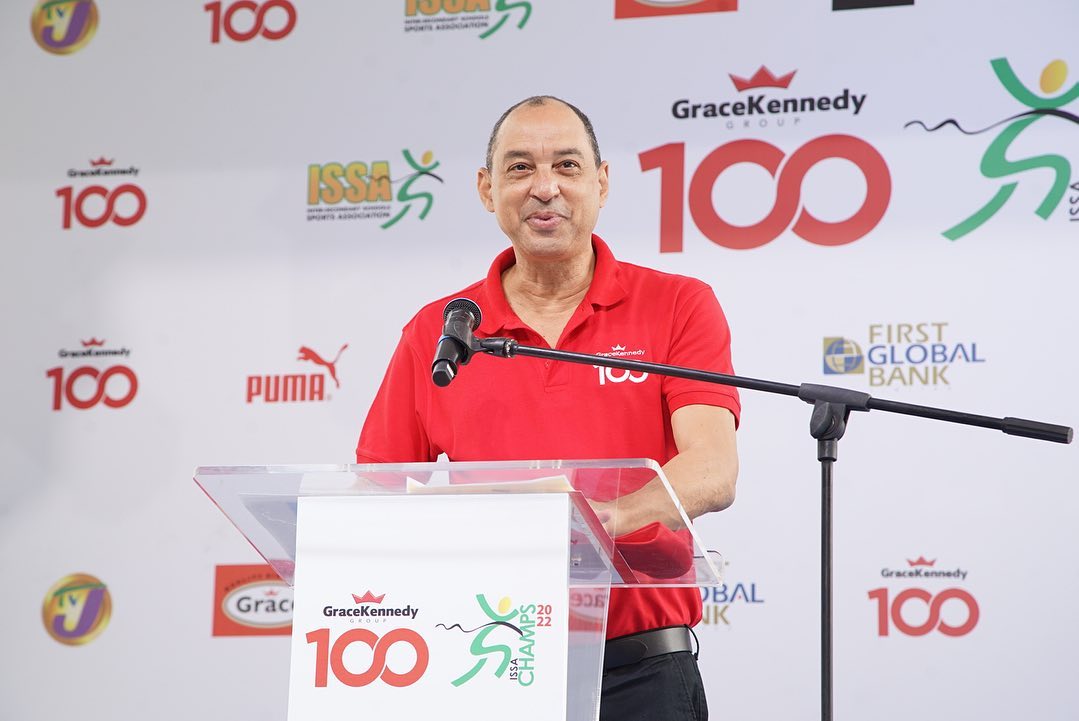 The 2022 ISSA/GraceKennedy Boys’ and Girls’ Championships will take place between April 5 and 9 at the National Stadium in Kingston. This year, for the first time since the outbreak of the COVID-19 pandemic in Jamaica in 2020, spectators will return to Champs, which has been heralded by many as one of the best track and field events for secondary school students in the world. 2022 is also a significant year for GraceKennedy as the Group marks its 100th anniversary.