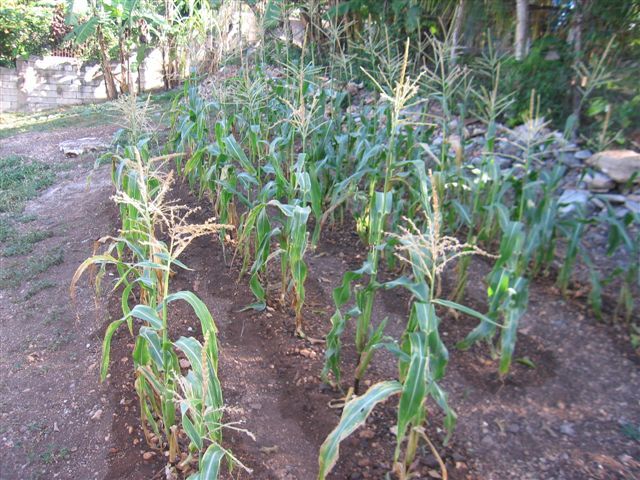 It isn’t often that I am at a loss for a subject for an article but this past month has been a different one for me here in Jamaica.  There hasn’t been anything tragic happen to me but still…  This month started with my being tired all the time and not getting motivated to do anything except feed and water my garden which I wrote about a couple of months ago.  The finality of this project was very disappointing.  The corn died without giving me more than two very small ears with perhaps 65% of the corn on each ear being edible.  I pampered those corn stalks for over two months watching them grow and produce what I thought would be two to three ears on each plant.  I knew the corn wouldn’t be the same as I had grown back in Massachusetts because the stalks never got more than four feet in height instead of six to seven feet.  During the last couple of weeks I kept feeling the ears to see if they were filling out.  There seemed to be ample amounts of silk coming from the top of the ears but the husks felt nearly empty.

Now the cucumbers are facing the same fate.  The vines are six to eight feet in length without much growth on them.  The largest cucumber isn’t much bigger than my thumb.  I can tell it isn’t going to make it as one end is bulging and turning yellow.  Even the pumpkins look sad.  They have ten feet of vines on each plant but no blossoms.  My neighbor says now that rainy season is here, they will start to grow.  Well he may be convinced but I’m not.  They are getting plenty of water and fertilizer now so what difference can rain make?  Time will tell.  On the positive side, the lettuce which I didn’t think would survive in this heat appears to be holding its own.  I expect very shortly to see heads forming on the plants.  The scotch bonnet peppers show no sign of waning thus my neighbors still like me.

Last February I wrote about one of my readers who bought a house from a listing on the internet that didn’t provide pictures or give details of a kitchen and two and a half of the bathrooms which included the master bath.  Since then I have been overseeing the completion of these rooms plus other issues such as; replacing a leaking reserve water tank, repairing rotted wood on the roof, and securing the services of an exterminator to rid the property of termites.  The enjoyable part of this task has been spending someone else’s money.  And at the same time ensuring the services provided are done properly.  Now that all of the work paid for by the former owner has been completed, the work ahead is to finish the inside to the specifications of the new owner.  During this process I have had to get several estimates for each project.  This has been a pleasant and rewarding experience for me because all I have ever read about contractors has been negative.  I have even written several articles on the dangers involved on contractors and their workers.  An article in the daily observer on April 19, 2010 written by Alesia Edwards which depicts how two people were fleeced for over U.S. $500,000 by the same contractor.  The article further states that, “about 14 other returning residents (have been) robbed of millions by building contractors in recent years.”  I wonder if Jamaicans are robbing other Jamaicans what they would do to someone from the U.S., Canada, or the U.K.  It also further states that, “most of the contractors are itinerant.”  Itinerant?  The Oxford Dictionary defines itinerant as (adjective), “traveling from place to place” and (noun), “an itinerant person.”  Hmm!?!?

My expertise in construction is very limited to say the least but with 45 years experience dealing with contractors repairing or remodeling the several homes I have owned, I think I have gained enough knowledge to know how to get the job done at a fair price and with quality workmanship.  Of course the owners of this house have the final decision based on my judgment.  So far all the work has been done very satisfactorily to me and the owners.

One of the projects I got estimates for involved replacing rotted flashing on the roof.  The first contractor came but immediately made another appointment so his carpenter could assess the job.  The other contractor simply looked at the roof from the ground without seeing firsthand what actually needed to be replaced.  He later emailed me an estimate asking me if I want to include the removal of the debris.  I answered in the affirmative but never got a response.

My feelings about building a home compared to buying an existing one haven’t changed.  I would still want to be present on the construction site from start to finish to assure the work was being done according to agreed upon plans and that the materials were not disappearing off the property.  Each of the projects involves only a few hours to a few days to complete without my having to be at the house 40 hours a week.  My purpose in helping these friends is the same for everyone I have helped over the years whether it has been simply answering questions from emails or hands on as it has been with his house.  By giving both authoritative and personal information, I hope to help people to make the decision whether Jamaica is right for them and how to go through all the different processes involved with migrating to Jamaica.  Later…