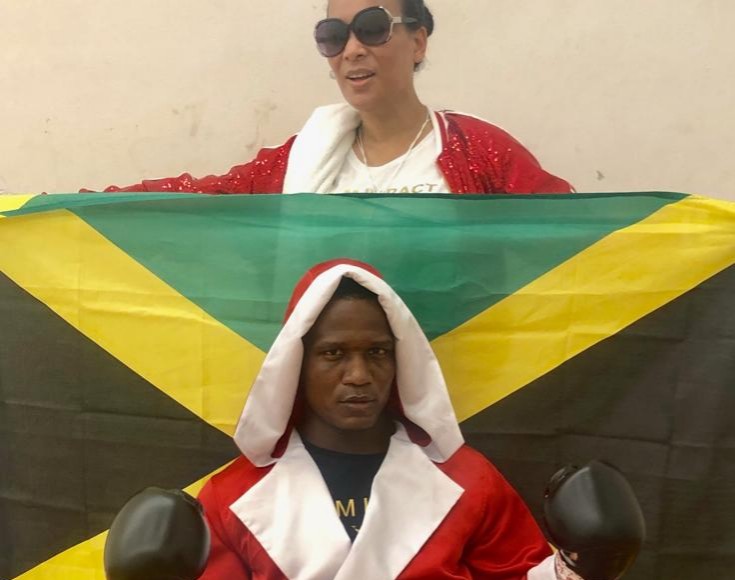 Can you imagine a former Beauty Queen and New York Runway Model who is also a Professional Boxing promoter?   Caren Halliwell was born to Jamaican parents in London and studied French at the University of London. After college, she entered the Miss Jamaica UK competition on a lark and won.  She then headed to New York where she was assigned to the 1st Black Modeling agency. She would later move to the west coast for work and post-graduate Journalism at UCLA. 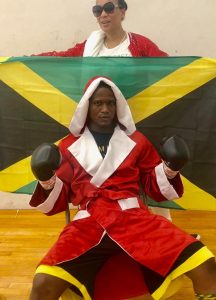 How did you get into the boxing business?
I was told I was born “immersed in boxing.” Spending quality time with my father Willie (and my fondest memories with him) always involved boxing. Willie kept his hand in both pro and amateur Jamaican boxing; housing and training Jamaica’s only two time Wray & Nephew Contender winner, Sakima Mullings.

Studying in California, I was introduced to three-time three division world champion, Mike “The Body Snatcher” McCallum and his family in Las Vegas. Spending time with my father also meant spending time with boxing champions he trained. McCallum is the only Jamaican boxer inducted into the International Boxing Hall of Fame.

My father mentored me with so much pride. Both of us sharing a passion for pugilism very few (if any) fathers and daughters are fortunate to experience. By absorbing his many decades of “tricks of the trade” and side-splitting boxing anecdotes, becoming a licensed Florida Boxing Manager was a very natural evolution.

How did you get into the dog business?
It was through collaboration with a family member intent on raising the declining standard of show quality Rottweilers in Jamaica. Knowing absolutely nothing about such a highly specialized industry forced me to rely on learning, reading, research, research, and even more research. An element of “knee clubbing” (though not literal) runs rampant in the show dog industry; comparable to the “Kerrigan/Harding” era of competitive figure skating, or doping in cycling. Once world class breeding excellence is attained, no judge can dare meddle with the scoring. At this point, the complex, highly selective breeding process (and grueling show training) morphs into a lucrative business model capable of being replicated anywhere in the world; from Jamaica to Japan, with unlimited franchise potential.

Growing up did you have any other encounters with business other than boxing?
In a word, Cabbage! In a serendipitous accident as a teen, I wandered into the back of a clothing store off Oxford Street in London where I discovered Fashion leftovers or one-off designer items and surplus unsold clothing which is referred to as “cabbage.” It is a lucrative business model which I followed to four clothing stores from a startup budget of less than $100. I was a determined teen (raised by a Westmoreland born father and St. Mary born mother) who would go knocking on doors of fashion houses. Many would laugh and “run” off this odd looking Jamaican teenager, lost and out of place in the elite European fashion industry who was audaciously requesting to buy “cabbage” like a waif from a Dickens novel asking for “more.”

What is your competitive advantage in business?
I think the ability to create clear, achievable and frequently evolving goals as well as patiently following up on concepts to fruition. I am a speed chess player but also a long term thinker.

What were some early challenges that you faced?
In the boxing industry, an early and continuing challenge is figuring out who is real and who is selling “Zap” or snake oil as one mentor, Harry Bennet would say. Professional boxing is highly cut throat, cut ear, cut eye, cut everything! The Show dog industry is no different. Notorious for being, in my humble estimation, 95% “bull….” and 5% real.

Some days, both feel 99% fake but working with the 5% which includes family and talented business partners such as Terri Moss and Harry Barnett is all the more rewarding. 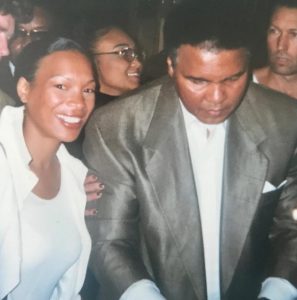 Could you tell us a little about your business partners?
Terri is a two time women’s World Champion boxer, International Women’s Boxing Hall of Fame Inductee and owner of Atlanta’s boxing gym, Buckhead Fight club. She is also the Promotor of Atlanta Corporate Fight Night and US trainer of future Jamaican World Champion, Ian Darby.

Harry, an Atlanta resident is a 50-year professional boxing veteran. He was the attorney for the team which brought the first ever pro boxing title fight to Jamaica: The George Foreman vs Joe Frazier WBC and WBA Heavyweight fight in Kingston. Harry was attorney of record for the famous ” Rumble in The Jungle” bout in Africa that featured Muhammad Ali vs George Foreman. Harry and the late Willie (Yap) both shared a famous boxing mentor: UK Promotor Mickey Duff, responsible for 19 world champions. Duff preceded Don King, Bob Arum, Al Hayman and Eddie Hearns.

Is there a favorite moment in business you can share?
Watching how much a talented Jamaican boxer in a ring evokes excitement from every person on the planet, regardless of where fans are from. Boxing fans went wild when Willie and Wesley, working in unison with Dragonbone LLC, flew Jamaican National Champion Ian “The Impact” Darby to Atlanta for his professional debut in the US. His sights are firmly set on winning three world titles in three years. 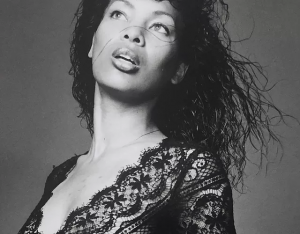 What are some business challenges you currently face?
Travel. Flying between both US coasts and Jamaica is a tough challenge. I used to work 100 hour weeks running a multimillion-dollar corporation in Malibu, CA but that’s no longer possible, healthy or viable.  Time, or lack thereof forces efficiency. A balanced healthy family life and ability to rest and play as hard as we work is of utmost importance; It’s an ongoing challenge, but 100% achievable.

Why did you leave NY for the West Coast?
Despite living between two prime locations in NY: The Hudson, W 57th St and W14th St in Chelsea, the lure of palm trees in Los Angeles proved too attractive to resist when Manhattan was blasted with 40″ of snow one winter.  I left to work for a fellow college alumnus at a West Coast Oil Company who became my mentor.

Initially I helped in Human Resources, employing accountants, attorneys, managers and engineers. It was an elite, efficient team; everyone was highly educated and being surrounded by extremely intelligent “out of the box” thinkers pushes one to keep up! Most of what I learned in business was thanks to this small but very significant oil company.

Who was your mentor, how did this occur and how has he guided you?
Moving to the West Coast, I worked for University of London graduate, World leading CEO and Engineer George Lamar at his oil company. He won a special presidential award for his ingenuity in the Gulf War and was subsequently named Newsweek’s Businessman of the Year. He encouraged everyone around him to keep learning; from pursuing M.B.A.’s to PhD’s and any form of post-graduate study. This encouraged me to re-enroll in college, keep studying and create a business plan for one of his start-ups.

Were you a journalist at one point?
Yes, I worked as an intern for an East coast TV station, later as a researcher for “Time” Magazine in New York. My last journalism post was as a contributing editor for an East Coast Fine Arts magazine.

Has being a Miss Jamaica UK helped in business, if so how?
Winning a beauty title for Jamaica is a platform that opens doors to philanthropy. I wrote and published an article in NY about the homeless crisis. Charities in Georgia heard of my work in non-profits and childhood advocacy and presented me with a Black History Month Award for outstanding child advocacy in a non-profit organization and most outstanding community work helping “at risk” inner-city children in the US.

Winning the Miss Jamaica UK title helps in one critical “business” every Jamaican entrepreneur should find time for (title or not): Altruism. Despite a hectic workload, volunteering for a local non-profit directly supporting homeless women and children is a mandatory, scheduled obligation of mine. The reward is not monetary, yet the “pay” is infinite.

How do you remind yourself of what’s important?
I think the quote by Alexandre Dumas, “One’s work may be finished one day, one’s education: never” is helpful.  Then there is, “To be happy at home is the ultimate goal of all ambition,” by Gandhi.

What is your favorite thing about Jamaica?
The passion of Jamaican women; the irrepressible spirit we as a Jamaican people possess; usually thanks to our grandmothers and mothers. The warrior heart, charm, humor and swagger of Jamaican men. And the importance we Jamaicans place on education, excellence and originality.

Glen Laman is the author of Jamaican Entrepreneurship: A review of the characteristics, traits and ideas of some of the island’s most accomplished entrepreneurs. Visit his website for more information.