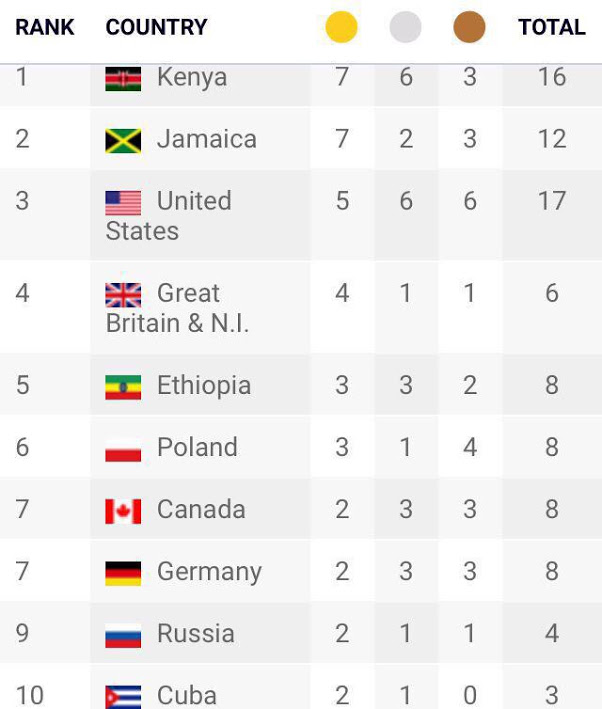 “When you have the heart of a champion, you have to run like a champion.” – Novlene Williams Mills

After an amazing nine days, the spectacular 15th IAAF World Championships in Athletics have ended. The medals have been shared up; the points distributed. The underperforming Americans, who earned the most medals (and points), will try to claim victory. The Kenyans, in terms of the number and quality of medals, were special and well deserved winners. However, we are the champions of the world, my friends. Forever and ever.

Of the 207 countries (or IAAF Member Federations) that participated, only 43 won at least one medal and only 68 gained one or more point. (It has been said that winning is not everything but wanting to win is.) Jamaica ranked second with 7 Gold medals, 2 Silver and 3 Bronze, and placed third on points. Kenya came in first; the United States third; Great Britain fourth; and Ethiopia fifth. Our marvelous hosts placed eleventh with just one gold. Only 19 countries struck gold and were able to feel that surge of pride and emotions as their national anthems were played.

Jamaica and Cuba were the only two Latin American and Caribbean countries in the top ten. And only five other LAC countries – Colombia (1 Gold);, Bahamas and Trinidad and Tobago, which tied at 22nd with two medals each, a silver and a bronze; Brazil (a silver) and Grenada (a bronze) – made it onto the medal table. Of the 6 sprint gold medals on offer, we won 5 and barely lost the sixth to the Dutch. Jamaica’s performance was superior to that of 205 other countries, and was bettered by only one.

If per capita income (PCY) were to be taken into account, as a proxy of our ability to support our athletes, then we outperformed countries far “richer” than ourselves. Only “poor” Kenya (PCY of $1,300.00, compared to ours of $5,300.00) performed better than we did. The PCY of the USA is approximately ten times that of Jamaica, and that of Great Britain more than eight times that of ours. In other words, with a smaller pool from which to choose and with fewer financial resources we were better than almost all our competitors. Of course, we are otherwise well endowed.

The individual performers were great. What was most satisfying, in my opinion, though were the outstanding performances in the team events.

Beyond the statistics we brought colour, style and fashion to the games. And spectacle and excitement to the lives of many. Many took the opportunity to escape.

Written and Submitted by – J. Blackwood