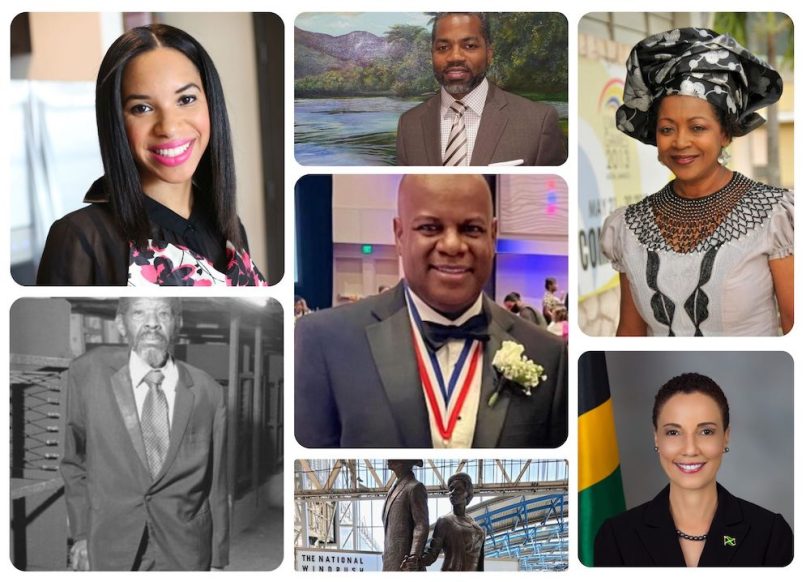 The major news for the Jamaican Diaspora in 2022 included the naming of a new Jamaican ambassador to Cuba, a symbolic removal of ties with Jamaica’s colonial history by Australia, the installation of a Jamaican doctor as head of the United States National Medical Association, and the celebration of Windrush Day in the United Kingdom. Other stories covered Jamaicans being honored by several countries around the world, recognition of Jamaicans contributions to society in the UK with one of the nation’s iconic “blue plaques,” recognition of Jamaican pioneers in Georgia, and the appearance of a Jamaican American food blogger on a new Food Network program.

DIPLOMAT FRANZ HALL NAMED JAMAICAN AMBASSADOR TO CUBA
Franz Hall, a career diplomat, was chosen to serve as Jamaica’s Ambassador to Cuba and took on his duties in November 2022. Hall’s appointment was announced by Jamaican Minister of Foreign Affairs and Foreign Trade, Kamina Johnson Smith, who added that the new ambassador’s duties will include oversight of Jamaica’s relations with the Dominican Republic. She described Hall as a “well-seasoned and dedicated foreign service officer” who has more than 30 years of experience in multiple facets of diplomacy. Hall, a former Jamaica College student, has a BS in International Relations from the University of the West Indies and an MA in International Relations from City College in New York. He previously served as Counsellor in the Jamaican Mission in Geneva, Deputy Consul General at the Consulate General of Jamaica at New York, Minister-Counsellor at the Jamaican Embassy at Washington, DC, and Consul General at the Consulate General of Jamaica at Miami. He was appointed as Director of Protocol in 2018.

COUNCIL IN AUSTRALIA CUT SYMBOLIC LINKS WITH JAMAICAN SLAVE PLANTATION BY CHANGING CITY’S NAME
The Moreland City Council in the northern part of Melbourne, Australia, adopted a new, indigenous name of Merribek on September 26, 2022, eliminating its symbolic connections to a Jamaican slave plantation. The council removed the name “Moreland,” which was adopted in 1839 by Farquhar McCrae, a Scottish settler whose paternal grandfather, Alexander McCrae, had owned the Moreland Estate in Vere, Jamaica where he was known as the “Sugar Lord.” The name “Merribek” means “rocky country” in the language of the indigenous Wurundjeri Woi Wurrung.

JAMAICAN DOCTOR NAMED PRESIDENT OF U.S. NATIONAL MEDICAL ASSOCIATION
Dr. Garfield A.D. Clunie, an expert in women’s health and health equity, was named the president of the largest and oldest organization of African-American physicians in the United States, the National Medical Association. He has over 15 years of experience with the organization and has served on its Board in several roles during that time. Dr. Clunie is double-board-certified in Obstetrics and Gynecology and Maternal-Fetal Medicine (MEM). He is an assistant professor of Obstetrics, Gynecology and Reproductive Science at the Icahn School of Medicine at Mount Sinai Hospital in New York. A native of St. Ann, Jamaica, Dr. Clunie earned as BS degree in biochemistry at the State University of New York at Stony Brook and completed a post-baccalaureate program at Wake Forest University, also receiving his medical degree there. While training in maternal-fetal medicine at Tufts University, he received the Tufts School of Medicine Excellence in Teaching Award in 2002 and 2003. Dr. Clunie said he was honored to serve in a role that will help shape the policies that will work to eliminate disparities in the diseases that affect minority community.

WINDRUSH DAY CELEBRATED IN UNITED KINGDOM TO HONOR CARIBBEAN IMMIGRANTS
After World War II, the United Kingdom invited workers from the Caribbean to travel to the UK for employment and to help rebuild “the motherland” that was suffering a labor shortage. The workers from Jamaica, Trinidad and Tobago, and other Caribbean islands who took up the invitation in 1948 arrived on the ship called “Windrush” at Tilbury Docks in Essex on June 22, 1948. There were 492 passengers on the Windrush, many of them children. Celebrations in Essex included music, poetry readings, storytelling, and a viewing of the Walkway of Memories art installation. Windrush Day was also celebrated at London’s Waterloo Station with the unveiling of a statue honoring the thousands of people who came from the Caribbean to the UK between 1948 and 1971. Queen Elizabeth II marked Windrush Day for the first time with a message highlighting the “profound contribution” made by Windrush “pioneers” to the UK. The message also conveyed the Queen’s congratulations on the creation of the National Windrush Monument.

JAMAICAN-BORN BRITISH SOLDIER NAMED TO UK QUEEN’S BIRTHDAY HONORS LIST FOR 2022
Felicia Watkinson, a staff sergeant in the British army who comes from Clarendon in Jamaica was included on the 2022 Queen Elizabeth II’s birthday honors list. She received the MBE, the Member of the Most Excellent Order of the British Empire award, the third highest ranking Order of the British Empire award. Staff Sergeant Watkinson, who joined the British army in 2003 and is a member of the Adjutant General Corps Staff, currently serves at the army’s headquarters in Hampshire, England. Her previous service included Belize, Germany, and Belgium. Watkinson said she did not expect or believe she would ever receive this great honor and added that it is an indication that the British Army has changed to become more inclusive and diverse. She accepted the award on behalf of all her colleagues as well as herself.

JAMAICAN FOREIGN MINISTER HONORED BY AKROPONG TRIBE IN GHANA
Kamina Johnson Smith, Jamaica’s Foreign Minister, was honored by Ghana’s Akropong Tribe with the title of “Tourism and Diaspora Queen” or “Otwiwa Asiedu.” Johnson Smith, who wore traditional Ghanaian garb, received the naming certificate during a ceremony at the palace of Oseadeeyo Kwasi Akuffo III, who also welcomed the Minister as “Akropong Queen” in a tweet. Johnson Smith said she was looking forward to facilitating more opportunities for Jamaicans to have exposure to their ancestral roots in Ghana and for Ghanaians to visit Jamaica for business, tourism, and cultural exchanges as well. She paid tribute to Jamaica’s National Heroine Queen Mother, Nanny of the Maroons, who has been named as a descendant of the Akropong people.

JAMAICAN WOMAN MADE IMPRESSION AT UNITED NATIONS
A woman from the Caribbean region made her mark at the United Nations. On April 11, 2022, Jamaican professor Verene Shepherd became the new Chair of the UN Committee on the Elimination of Racial Discrimination (CERD). She was recently re-elected Vice Chair of the CARICOM Reparations Commission and has served as Chair and Co-Chair of Jamaica’s National Council on Reparations. Shepherd, an academic, social historian, and advocate for reparations, is the author of several books on slavery, emancipation, Caribbean revolutions, as well as the Caribbean Community claim for reparations from Britain. The election of Shepherd to the position of Chair during the UN Decade for People of African Descent and the year that will see the UN introduce a Permanent Forum on People of African Descent was especially impactful as she is the first Chair of CERD to be a member of the African Diaspora.

BLUE PLAQUE DESIGNATING HISTORIC “SAFE HAVEN” SPOT IN LONDON AWARDED TO HONOR JAMAICANS
On April 10, 2022, a Blue Plaque was awarded to honor the Jamaicans Hubert “Baron” Baker and Leopold “Totobag” Williams, who established a “safe haven” in Notting Hill for individuals arriving in Lon-don from the Caribbean in the 1950s and 1960s. Baker was born in Jamaica in 1925 and immigrated to Britain in 1944. He joined the Royal Air Force at age 19 when discrimination in Britain was rampant. He convinced the government to open the Clapham South air raid shelter to temporarily accommodate arrivals from the Caribbean and then worked to create Black communities and find work for Black im-migrants. He welcomed 492 arrivals from the ship “Empire Windrush” in 1948. The Blue Plaque ceremony on April 10 was the latest in a series of community ceremonies recognizing individuals in the African Caribbean community for their contributions to society.

JAMAICAN MINISTER OF STATE HONORED JAMAICAN PIONEERS IN GEORGIA
Senator Leslie Campbell, Jamaica’s Minister of State in the Ministry of Foreign Affairs and Foreign Trade, saluted and honored the first Jamaican settlers in the state of Georgia for their part in advancing Jamaicans and their overseas communities. Campbell thanked the pioneers for enriching Jamaican society and helping to shape the future. He made his remarks at a virtual event staged by the Jamaican Consulate in Atlanta, George, to mark Black History Month on February 12, 2022. The event was titled “Our Stories: Jamaican Pioneers in Georgia,” and provided a forum in which the children and grandchildren of the first Jamaican settlers in the state could share their stories and celebrate the courage and resilience of the pioneers. Campbell noted that over some 40 years the Jamaican Diaspora in Atlanta created a variety of community-based organizations, alumni groups, and charities with strong ties to the area and that make contributions to the national development of Jamaica in education, health, social services, and trade.

JAMAICAN AMERICAN BRIANA RIDDOCK APPEARED ON NEW FOOD NETWORK PROGRAM
Jamaican American food blogger Briana Riddock appeared as a contestant on the new Food Network television show, “Raid the Fridge.” Riddock has a master’s degree in Food Studies from New York University and writes the popular blog at “seasoningbottle.com.” On “Raid the Fridge,” chefs competed in specific challenges that required them to use the ingredients they found inside a set of refrigerators and were different in each round of competition. The chefs chose a fridge on the basis of its exterior decorations, which did or did not reflect what ingredients were inside. The show aired on February 1, 2022 on the Food Network and on Discovery+.