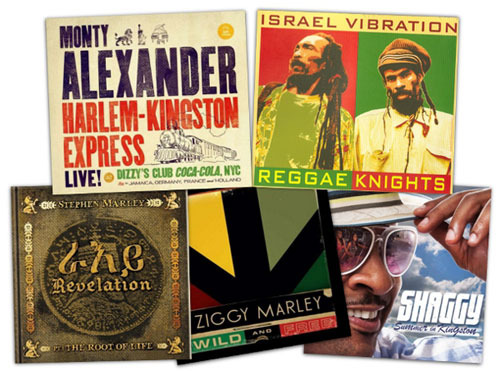 So….The Recording Academy has announced the nominations for its most prestigious awards—for the 54th staging of the Grammy Awards!  Is it just me or do the nominations in the category of Reggae keep getting more and more ridiculous?  Is it me or do these nominations not reflect the truth in the “Reggae Music Industry” whatsoever?  Let’s take a closer look!

And the nominees for Best Reggae Album are:

If I remember correctly, the last time I checked Monty Alexander’s genre was jazz.  Not to take anything away from Mr. Alexander as he is in my estimation the most accomplished musician in this group.  The truth of the matter is, how many people have heard, much less purchased Mr. Alexander’s album?  As far as the brothers Marley are concerned, it’s becoming the norm to see them nominated each year (I’m wondering if the powers that be are thinking that they are their father Bob and not merely themselves).  In their own right they are pretty decent artistes; however, I dare say, there are other artistes in the reggae pool who are far more talented than they are!  It is fair to say that come next year, we can expect to see Stephen’s Revelation Pt. 2 also being submitted for consideration!

In the recent past there has been controversy as to the nomination of Stephen Marley’s album “Mind Control” being submitted two consecutive years in different categories. We gripe, but unlike many of our Reggae artistes, Mr. Marley has an extremely creative marketing team.  TThis lends to another comment Ms. Barnes made during our conversation where she said: “I notice that no matter how many millions people like USHER, BEYONCE, LADY GAGA, etc. make, they all still have a full team (Manager, Stylist, Publicist, Trainer, Lawyer, Accountant, Booking Agent, Music Publisher, and so on)…while reggae artistes think they can do it all; or their friends down the lane can.”  This simply means is that Mr. Marley and his team have adapted a pattern that works–one which has contributed tremendously to the strides he has already made.

The Five Albums Contending for “Best Reggae Album” for 2011

The five albums that I think should be nominated for the Grammy award this year are as follows:

First on my list of songs would have been Ed Robinson’s ‘Written in Stone’; however, most people would say that’s me being biased as Ed is my bonafied brethren.  While I would give Kartel a nod for his music (all that it encompasses-arrangement etc.), most of his songs don’t meet my approval for their lyrical content. I would even go as far as suggesting that Matisyahu’s Live at Stubbs, Vol. II Deluxe Edition be nominated but my impressions of the gentleman are a whole other matter for a different conversation.  Why wasn’t Dean Frazier’s compilation album paying homage to the late great Gregory Isaacs (who by the way was overlooked last year for his Grammy nod) nominated?  In a recent conversation with Ms. Patrice Barnes – renowned, multi-talented music industry insider, she mentioned the fact (and I quote) The Grammy Nominations definitely doesn’t surprise me. Reggae Music lacks structure and most are not aware that if you’re not voting members or even submit an album, it cannot be considered. (End quote).  She went on to make mention of a YouTube video in which Ms Christy Baber (Vice President of Marketing and Promotions, VP Records) spoke about the Grammys and how Reggae fits.  One very profound statement Ms. Barber made was the fact that last year, there was only ONE registered voter on the island of Jamaica (the birthplace of Reggae Music). We ultimately leave the job of nominating the albums and voting to people who have no clue what Reggae is truly about, then we complain when the choices made are publicized.  Ms. Barnes’ response to those facts was that “We are complacent and don’t practice self investment. Artists are not willing to get a professional website much less pay GRAMMY membership dues annually.”

Who would be my choice to win the award this year based  on the options given by the Academy?  I am going the politically correct way and so my choice will be two-fold. Since I don’t pretend to know or for the most part–comprehend the entire pomp and pageantry surrounding the selection and final decision-making process for the Reggae Grammy, I will say that if the criteria is based solely on the quality/superiority in all areas of the final product…my choice would be Monty Alexander’s Harlem-Kingston Express Live.  However, if  Mr Alexander’s album is truly disregarded since it is a jazz album then my choice would be Israel Vibration’s – Reggae Knights. It is indeed a sad state of affairs when important choices like this must be made through a process of elimination that is less than favorable and the outcome still does not reflect the truth.  A solution to this problem is to have people step up to the plate and become voting members of the Academy who can then have a say as to what music truly belongs in the process.  Who knows better than the avid lovers and listeners of Reggae music, what songs ought to have been in the running for the coveted title.  Let us stop the talking and become people of action.  I challenge you to help make a difference by this time next year!

About the Author:
Andrea ‘Anmour’ Holmes-Seymour is the VP of Operations/Public Relations/Executive Recruiter, Royal Mogul Entertainment, Inc a full-service organization, providing various services to the general public as well as the entertainment community.