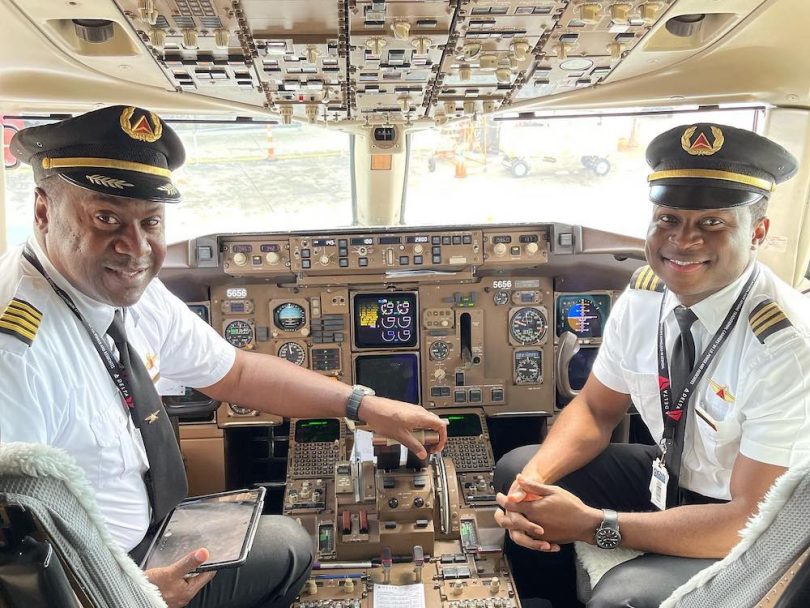 Two Delta Airlines pilots, First Officer Marlon Dean Dayes and Captain Mark Lumsden, had both been told of their physical resemblance many times by strangers, but had never met. Then, just three months after their first meeting, they ended up flying together on the same flight. According to Dayes, it was the first time since he had been with Delta that he flew with another Jamaican. In an interview with the Jamaica Observer, he said it was a “very big deal” to realize that two individuals from the small island country of Jamaica were together at the second-largest airline in the world. It was a stroke of luck that Dayes and Lumsden had the opportunity to fly together as Delta Airlines employs some 14,000 pilots and since the airline industry has often been criticized for its lack of workforce diversity.

Both men are from Buff Bay in Portland, Jamaica, and both had wanted to be pilots from a very young age. Additionally, their uncanny resemblance had been pointed out to both of them numerous times.

Dayes added that meeting Captain Lumsden was inspiring to him because he now has confidence that when his time comes to be a captain, he knows it can become a reality. Seeing someone who looks like him, who relates to his culture and has had similar experiences, in a position of leadership was “extra special,” he told the Observer.

Lumsden also expressed his elation at connecting with another Jamaican. Just like Dayes, he had wanted to be a pilot from a young age. He also feels proud to fly with Dayes. While he has flown with other First Officers who were Jamaicans, this was Dayes’ first time to fly with a Jamaican captain, which made the experience a special one. “I am always proud to fly with a fellow countryman, knowing the hurdles we endure,” he shared in the Jamaica Observer interview.

Lumsden noted that only three percent of pilots in North America are of color, so it makes him feel proud when he finds a pilot who is from Jamaica. Lumsden attended Mona Prep and Campion College in Jamaica before migrating to the United States to pursue his dream of being a pilot. He then returned to Jamaica hoping to work for Air Jamaica, but the plan did not work out, so he went back to the US and has now been with Delta for 28 years. Dayes became a pilot at the age of 19 and began flying for a commercial airline when he was in his young 20s. He realized a lifelong dream of flying back to Jamaica in January of 2020 and was applauded by the 150 passengers on his flight following his landing at Norman Manley International Airport.

The airline industry has made more efforts to recruit Black pilots in recent years. United Airlines launched its Aviate Academy in January 2022 as part of the effort, and several young Black female pilots have entered the flight industry as well, including Miracle Izuchukwu of Nigeria who is on track to be the youngest Black female pilot flying for a major commercial airline.