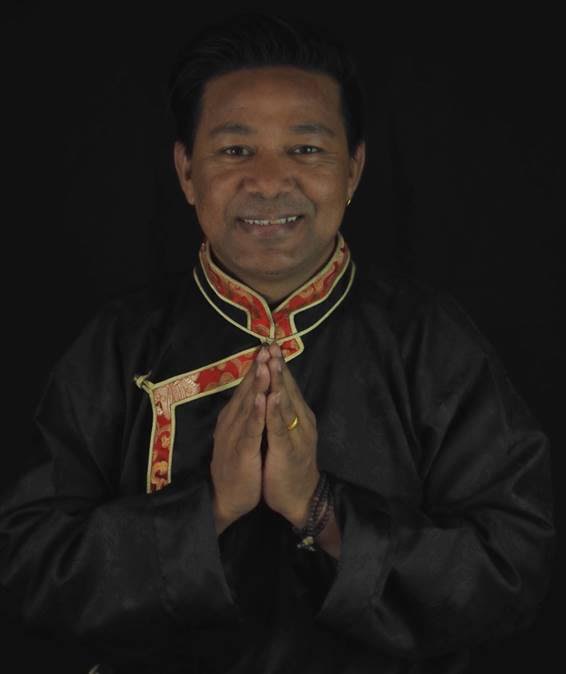 Notable Tibetan-Canadian singer and multi-instrumentalist DORJEE TSERING releases his new album THANK YOU CANADA in a concert on Tuesday, June 6th at 6:00 pm to 8:30 pm. As part of Lulaworld 2017, the celebration takes place at Toronto’s Lula Lounge, 1585 Dundas Street West, Doors open at 6:00 pm and Dorjee invites everyone to join him in a beginner Tibetan dance lesson (6:45 pm) before the concert. Toronto’s purveyors of folk, rock, blues, and Hindustani music SO LONG SEVEN close out the night.

On the occasion of the True North’s sesquicentennial, Dorjee Tsering’s Thank You Canada album is a heartfelt expression of great gratitude for the open arms of welcome from the country to which he emigrated from his native Tibet many years ago. The title track is a pop song of praise for Canada – recorded by Dorjee’s band with a 23-piece orchestra and sung alternately in Tibetan and English – that quotes our national anthem and features a wholly unique, fast-tempo sargam rap in the middle. Given the current climate toward refugees and immigrants in the U.S., it’s an especially poignant and meaningful recognition of Canada’s warmer, more hospitable approach.

The entire album features noble, anthemic, lilting melodies with folk-like instrumentation, and a gentle, charming mood. The songs hew to the line of traditional Tibetan music, keeping Tsering’s heritage alive, while moving it forward by incorporating western instruments and influences.

While entirely Tibetan in spirit, this is an eclectic and wide-ranging collection of songs. On “Gongsa Chok” Tsering’s guitars, vocal, and rhythm manage to conjure an Asian likeness of King Sunny Ade’s JuJu music. “Tashi Delek” offers an almost Celtic flavour with accordion and fiddle driving the melody, as does “Amma Changma,” a drinking song. Darker than the rest, in a minor key, and the only non-original song on the album, “Thoeshay Circle Dance” is a first-take recording of a very old traditional mountain tune. Thoe is a small region within the province of Ü-Tsang in Tibet. Shay means song. In the sweet “Tibetan Alphabet Song,” Dorjee aims to teach the Tibetan alphabet to children, to help ensure that the language is preserved.

Born a Tibetan exile in India and now a Canadian immigrant, Tsering has devoted his life to learning the ancient ways of Tibetan music, adapting and growing these traditions with new sounds, and sharing them with as many people as he can, not only in his new homeland, but across America and Europe as well. At folk festivals, in clubs large and small, at house concerts, and on recordings and video, Tsering has brought much  attention to his endangered culture, whether performing on the dranyen (Himalayan lute), flute, piwang (two-stringed fiddle), yang-qin (Chinese dulcimer) or with his distinctive voice.

Throughout 2013 and 2014, Tsering toured throughout North America with his One Hour in Tibet stage performance, in which he invited the audience to feel and experience the beauty of Tibetan culture, as well as the ongoing suffering of his people. In 2015, he released his first full-blown East/West collaboration, Năng (Tibetan for “home”), produced by veteran composer/producer Lou Natale. He continues their fruitful collaboration as the producer of the Thank You Canada album as well. In 2016, Tsering was proudly one of only 12 musicians chosen from more than 100 applicants, from 47 countries, to be part of the New Canadian Global Music Orchestra, (NCGMO) assembled by The Royal Conservatory of Music to celebrate the cultural diversity and pluralism of Canada as it turns 150.

The Thank You Canada album release concert is part of Lulaworld 2017 Festival, which runs June 1-11, with more than 20 concerts, that include many exciting international collaborations and project debuts.