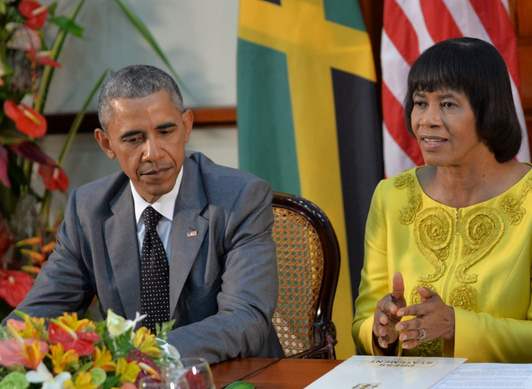 On August 6, 1962 Jamaica celebrated its independence from British rule. Since then, the small island nation of barely three million people has cemented its name in the Caribbean region and around the world with many significant historic events. Here are the top ten Jamaican historic  moments since the country’s independence. Civil rights leader, the Reverend Dr. Martin Luther King Jr. and his wife, Coretta, landed in Jamaica on Sunday, June 20, 1965. Dr. King’s visit led him to the grounds of the University of the West Indies where the graduates and a huge audience filed into the Assembly Hall to hear him deliver the valedictory speech. His speech entitled, “Facing the Challenge of a New Age” reminded listeners of the necessity of resisting injustice with displays of love. He spoke of the increasing need for worldwide brotherly love, especially in societies that were now free from colonial rule. An exciting and memorable event not only in Jamaican history but in the history of Rastafarians was Thursday, April 21, 1966 when Ethiopian Emperor Haile Selassie I visited Jamaica. His visit was highly anticipated by an estimated 100,000 Rastafarians who greeted him with the playing of drums and sounded abeng horns. The Gleaner reported that the Emperor rewarded members of the Rastafarian community with gold medallions bearing the Ethiopian seal, while some Jamaican politicians received miniature coffin-shaped cigarette boxes. Jamaica’s national football team, known locally as the Reggae Boyz, made history as the first Jamaican to qualify for the World Cup in France 1988. Led by Brazilian coach Rene Simoes, the Reggae Boyz took the title of the first English speaking Caribbean country to qualify for World Cup soccer finals. They played three games, losing two and winning the final match against Japan. The team finished 22nd out of 32 teams. On September 12, 1988, Hurricane Gilbert struck the island leaving devastation so widespread that it is still remembered as one of the most destructive storms to ever hit Jamaica. The Category 5 hurricane left damage estimated at $4 billion, and 45 persons lost their lives. More than 800,000 persons had to seek shelter and the parishes St Thomas, St. Catherine, Kingston and St. Andrew were placed under a state of emergency for one month. The historic achievement of Jamaica’s national bobsled team is immortalized in the 1993 movie Cool Runnings. The team made their debut appearance as the first tropical team competing in a cold-weather sport at the 1988 Calgary Winter Olympics in Canada. Though they lost control of the sled and did not finish the race, the team of Devon Harris, Dudley Stokes, Freddy Powell, Michael White and Chris Stokes gained popularity quickly and was supported by many of the other nations.