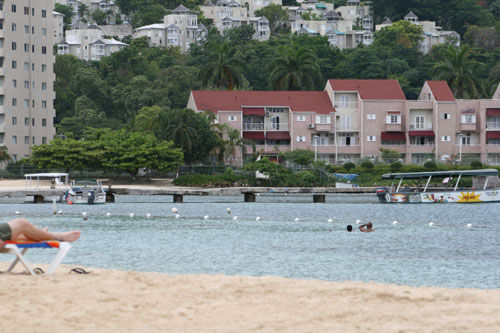 Recently, I spent 10 days in Jamaica. Five days were for my family reunion and the other five days vacation. Below is my trip report with pictures. I tried to capture some of the high points of the trip. I will have more details on some of interesting discussions, hot topics and some random thoughts on my blog.

Day 1
The Spirit flight left late. There was some “drama” in the back of the plane. Two passengers were arguing with the flight attendant over who could sit at the emergency door. This plus the flight attendants hoarding people on the plane like a Jamaican mini bus conductor really heightened the tensions. I think people need to remember airlines like Spirit are discount airlines. No frills. Air Jamaica is slowly going this route.

Arrival in Montego Bay was “non” dramatic however the upgrades to the airport seem to be complete. The last time I was here, 2 years ago there was still construction every where.

I was particularly impressed how quickly we got through immigration. The Jamaican immigration offer was very nice. I asked her about some Chinese construction workers walking around the airport. She mentioned, “They were hired to do some thing they THINK we Jamaicans can’t do”. This probably is a top in my blog.

We got outside the airport pretty quickly. Now the drama begins. I rented a mini-van for the trip as I have a big family (wife and 3 daughters) plus we would need extra space for the family reunion events. I typically get my car from a specific company. I have never had a problem. In fact, I would recommend them in a heartbeat to anyone. I walked out the airport and they are waiting for me. This time there was no one around.

Well, they left the door open for a swarm of sales reps from other rental companies to ask if we needed a car or a cab ride. I waited a few minutes. No one showed up. The rest of the family was getting a little agitated because it was a warm day.

A gentleman from another rental car company came up to us. He asked if I need a car. I told him I was waiting on a car from another company. He offered me his phone to call them. I did and thanked him.

Someone from the rental car company was coming down to take me to the office. When he arrived he realized he could not take us all up to the office. He brought a car and would have to make 2 trips to take us to the office. I asked what happened to the van. He put me on the phone with the owner who explained that someone had rented it and put diesel fuel in it. They were in the process of cleaning out the diesel fuel from the engine and it would be ready that evening. They would take me to Ocho Rios and then bring it later. I was very disappointed and told him I did not want it.  To cut to the chase I ended up in a rental office of the gentleman who loaned us the phone. I had to pay more for a 7 seater car versus the mini-van I was expecting. By the time we completed the paper work and the car was ready everyone was hungry. The gentleman at the rent-a-car company recommended a place called Scotchies which was just outside Monetgo Bay on the way to Ocho Rios.

We found the restaurant quite easily. It had a great ambiance.  I had some Jerk Chicken and festival. My wife had fish. The other family members also had Jerk Chicken. The food in my opinion is more catered to tourist. A real Jamaica would probably like the chicken spicier. My wife’s fish was filleted. She was expecting to see the head and tail of the fish…lol. I think we all agree that this is the perfect place for a tourist to ease into Jamaican food.

Next, we were off to Ocho Rios.

The drive was pretty smooth going in. The roads were great. Last time I traveled from Mobay to Ochie they were working on parts of the road. The one disappointment I had was a “secret beach” we had discovered near Run Away bay was now commercialized.  There was a stage there with shops and vendors.  I know there are probably still many “secret beaches” to be discovered.

We arrived in Ocho Rios right around rush hour. We found our hotel easily. It was called Rooms on the Beach. It is right after the craft market in Ocho Rios and next to Jamaica Grande hotel.

There was a guard at the gate of the hotel. The place was nice and clean. It is not the Ritz but it is affordable and right on the beach. Check-in was smooth with out any issues. We took our bags up to the room took showers and went off back towards my Aunt’s house outside of Ocho Rios. There would be the first event of the family reunion. It would be a “meet and greet” with family members. Also, it would be a reunion with me and part of my family as 2 of my children were in Jamaica 3 weeks prior to our arrival. They were happy to see us, especially their little sister. They did not have a Jamaican accent…lol.. they were still Americans.  I met a few cousins I did not know about. I also saw a cousin I have not seen in over 30 years.

After the meet and greet we went back to the hotel. Many other family members there for the reunion also stayed at the hotel.  We all would discover the towel “drama”. Through out the whole stay, there never seem to be enough towels on property.

The day started out with us relaxing at the hotel pool and then the beach. While at the pool I observed a lady picking up almonds on the grounds at the front of the property.  I asked her what she used the almonds for and she said she makes almond drops. She mentioned they are very good.

The plan for the day was to have a picnic at Somerset Falls. We had to change that plan as we later learned that the road going to Port Antonio was pretty bad.  My Aunt suggested we go to Cranbrook Park.

The road to the park was rough.

The price to enter the park was US$10.00 per person with children 12 and under US$5.00. We were assigned a tour guide. His name was West. The first part of the park tour took us around the gardens and West explained the names of the plants and how some of them were used in Jamaica.

The second part of the tour was the best but could be a little grueling. It was a 2 mile nature walk along the river that ran through the park. West kept telling us at the end of the walk we would be rewarded not giving us a clue as to what we would see. There are a few rest stops along the way. The children were amazed by the “shame ooh lady plant” we saw along the way. They touched the plants and watched them close up.

I thought we were the only ones on the trail until we met some ladies coming down. They told us the secret. The trails lead to where the river starts at the top of the mountain. One of the ladies mentioned she did not bring a bathing suit so she stripped naked and had a swim at the lagoon at the top of the river. They described how beautiful the watering hole was.

Children in the group were tired and so were some of the adults. A 2 mile walk up hill is not the norm for many of them, especially the ones that live abroad.  The description from the ladies gave us a little burst of energy. We wanted to see what was at the end.

When we got to the ‘River Head” it was amazing.  Water was coming out the side of the mountain and there was a lagoon. It was just as the ladies described. The water in the lagoon was inviting. The water come out of the hill side was an incredible site. I thought to myself…People say there is no God. They must be crazy.

We spent some time at the river head. Not everyone could take a dip in the lagoon as we never knew this was in the park. Soon it was back down the hill. The walk back was faster than going up. Part of it is going downhill but the other part was the cold water energizing everyone.

We went back to the hotel and got ready for dinner. Yes we need to ask for towels in the room.

We walked to a plaza a few minutes from the hotel and had dinner at a Chinese restaurant. The name was Dancing Lions. Jamaican Chinese food always tastes different from regular Chinese food. The food was excellent. It brought a good end to day 2.