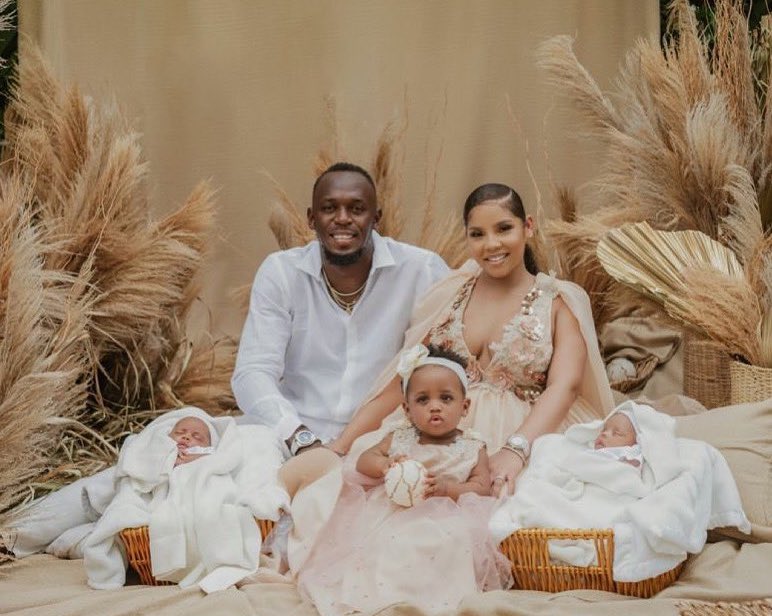 Jamaican eight-time Olympic gold medal winner Usain Bolt and his partner Kasi Bennett celebrated Father’s Day in 2021 by introducing their new-born twins, son Saint Leo Bolt and daughter Thunder Bolt. The Olympic champion continued his unique naming convention for his children with the arrival of the twins. In 2020, his first child, a daughter, was named Olympia Lightning Bolt.

Usain St. Leo Bolt was born in Jamaica in 1986. He is considered to be the greatest sprinter in history and is the most successful male athlete at the World Championships. He is the first to win four World Championship titles in the 200 meters. He has 19 Guinness World Records and is second only to swimmer Michael Phelps in the total of accumulative Guinness World Records presented for his total number of accomplishments and wins in sports.

Bolt retired from Olympic competition after the 2016 Games in Rio and has pursued numerous other interests, both athletic and entrepreneurial, since his retirement.

Bolt is the co-founder of Bolt Mobility, an electric scooter company that launched in 2018. The micromobility firm provides electric scooters and additional mobility devices. He introduced the firm’s future Nano minicar in Paris in 2019. Bolt says his electric scooter differs from the competition in that it has storage for bags, shopping, and mobile phones. The scooters can attain a speed of 30 miles per hour. Bolt Mobility has plans to expand its operations in the United States, Asia, and Europe.