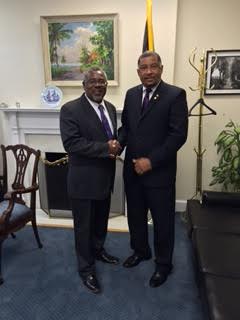 This past November 19th, 2015 saw a quiet but important one and one meeting at Jamaica’s Washington D.C Embassy between Wayne C. Golding Sr. Esq, the current Jamaica Diaspora Advisory Board Member for the Southern United States and Ambassador Ralph Thomas who is the newly appointed Ambassador to the United States from Jamaica. Ambassador Thomas was appointed to the position in August 2015 and is coming directly from Jamaican Ambassadorial duties to China.

According to the Honorable A.J. Nichols, Jamaica’s Minister of Foreign Affairs and Trade, “ Ambassador Thomas served in China during an important time for Jamaica/China relations, especially in the area of economic development, and ensured the continuation and strengthening of this relationship through the development of key initiatives. This level of critical thinking and creative energy is what we expect Ambassador Thomas to bring to the relationship with the USA, one of our major international partners”.  Board member Golding also stated that he himself “considers the Jamaican Diaspora of the Southern United States one of Jamaica’s most important partners”.

Over the past year the Jamaica Diaspora in the Southern United States has been seeking to seriously solidify its advisory role to The Honorable Arnaldo Brown – Minister of State in Jamaica’s Ministry of Foreign Affair and Trade and take full opportunity on the behalf of the region of membership to the Board. The Board has provided prime access for the region to the true ear of the Government of Jamaica and has facilitated the maintenance of a perennial partnership with the Jamaican Diaspora.

The meeting between Diaspora Board Member Golding and Ambassador Thomas covered numerous topics that impact the Jamaica Diaspora in the Southern United States, which included but was not limited to Immigration, Integration and Deportation. The meeting also focused on how the Jamaican Diaspora can contribute to comprehensive changes in Jamaica’s health care system and facilities. The Ambassador was also briefed and updated on the activities and accomplishments of the Jamaican Diasporans and Organizations in the region.  There were also explorative and extensive talks between the two with regards to the continued building of the capacity the Jamaican Diaspora to influence United States governmental policy as a constituency, to gather credible data, research Jamaican Diaspora expertise and how to work cooperatively with the Embassy and Missions of Jamaica across the three regions.

This meeting with Ambassador Thomas represented only one of a series of regular interactions over the past year between the Embassy of Jamaica and the Jamaica Diaspora Advisory Board Member for the Southern United States.

During this meeting, Ambassador Thomas made his personal commitment to bring his experience and diplomatic influence in the further building and expansion of the established partnership with Jamaican Diasporans through the entire region.  With a solid and pronounced invitation from Board Member Golding, the Ambassador promised to visit the Southern region in the coming months. He also strongly reiterated the strong and steadfast commitment of the Government of Jamaica to a continued high level of partnership with Jamaica’s most valuable assets in the Southern region of the United States, its human capital, which includes first, second, third generations and the youth.