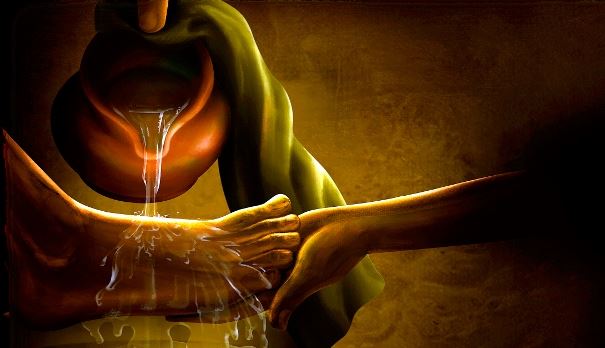 Peter was adamant that Jesus would not wash his feet.  After all, washing the feet of guests was the responsibility of the house servant (see 1 Samuel 25:11), but as they were lying with their feet extended from the table, having finished supper, Jesus “riseth from supper, and laid aside His garments; and took a towel, and girded Himself. After that He poureth water into a bason, and began to wash the disciples’ feet, and to wipe them with the towel wherewith He was girded” (John 13:4-5, KJV). Undoubtedly, Peter watched all of this unfold with a sense of bewilderment, so much so that when it was his turn, he emphatically asked, “Lord, dost thou wash my feet?” (v. 6).
On this verse the JFB Commentary observes: “Thus far, and in the question itself, there was nothing but the most profound and beautiful astonishment at a condescension to him quite incomprehensible. Accordingly, though there can be no doubt that already Peter’s heart rebelled against it as a thing not to be tolerated.” However, Jesus was having none of it. Probably while looking Peter straight in the eye, He “answered and said unto him, What I do thou knowest not now; but thou shalt know hereafter” (v. 7). In other words, “You don’t understand now what I’m doing, but it will be clear enough to you later” (The Message). The rest of the chapter provides a compelling narrative of how this exchange ended. For our purposes, the words of Jesus in verse 7 is of particular significance. Read them again, slowly.
Amidst the hustle and bustle of our day-to-day living, we sometimes find ourselves in situations that leave us questioning ourselves and God.  Whether it is suddenly losing a job, a loved one, being in a difficult relationship, having what seemed like a sure thing end in failure, an open door that closed without warning, a situation that seem to makes no sense, the leading of the Lord that is no longer clear, and whatever else, we like Peter are often times bewildered. Yet in our uncertainty and confusion, the words of Jesus to Peter are His words to us: “You don’t understand now what I’m doing, but it will be clear enough to you later.” These words are not always easy to embrace, but as we struggle to make sense out of the incomprehensible, the still small voice persists: “Trust me. You don’t understand now what I’m doing, but it will be clear enough to you later.”
Peter did not relent the first time. However, he did surrender to the wisdom of His Lord (vv. 8-9). And therein lies the rub, the challenge for all of us. Can we trust our Lord when we do not understand? Can we trust Him when we cannot see His way? Can we trust Him when nothing makes sense? As we stand at the crossroad of indecision, His words still ring true today as it did back then: “You don’t understand now what I’m doing, but it will be clear enough to you later.” Do you trust Him enough to surrender your will and your way and embrace His will and His way? Do you trust Him that He knows what He is doing? Like Peter, we get to choose. We must choose.