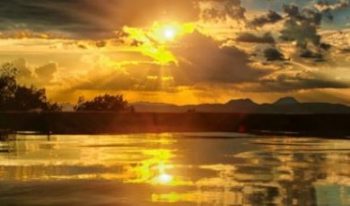 While I do not get to do as often as I would like, one of the things I enjoy doing is walking, usually in parks and along trails. Not only is it good exercise if done consistently, but it is also a great way to empty the mind of mental clutter. One of the greatest benefits for me is the opportunity to meditate, to pray, and to feel the embrace of my Heavenly Father in the surroundings. Then there are the times when I am simply enjoying the walk and nature, and it is during those times that it becomes evident that the glory of God is everywhere to be seen.

I think the Psalmist David shared those experiences as he sat outdoors tending sheep. I believe that as he probably laid on his back, looking up into the skies, the words that became a part of Psalm 19 took form in his mind: “The heavens declare the glory of God; and the firmament showeth his handiwork. Day unto day uttereth speech, and night unto night showeth knowledge. There is no speech nor language; their voice is not heard. Their line is gone out through all the earth, and their words to the end of the world” (vv.1-4a, KJV). It is as Matthew Henry states, God “not only glorifies Himself, but gratifies us, by this constant revolution; for as the light of the morning befriends the business of the day, so the shadows of the evening befriend the repose of the night; every day and every night speak the goodness of God, and, when they have finished their testimony, leave it to the next day, to the next night, to stay the same.”

Day after day, night after night, a constant revolution. The Message paraphrase reads, “Madame Day holds classes every morning, Professor Night lectures each evening. Their words aren’t heard, their voices aren’t recorded, but their silence fills the earth: unspoken truth is spoken everywhere.” It is no wonder that when Carl Boberg, while on a two-mile walk through a thunderstorm from a church meeting, considered the power of God on display in the universe, he later penned the words: “Then sings my soul / My Saviour God, to Thee / How great Thou art!”

We couldn’t miss the glory of God if we tried. God has made Himself known and we who have found Him can testify that the “revelation of GOD is whole and pulls our lives together” (v.7a, MSG). For those still waiting to find Him, there really is no excuse. How great He is indeed!