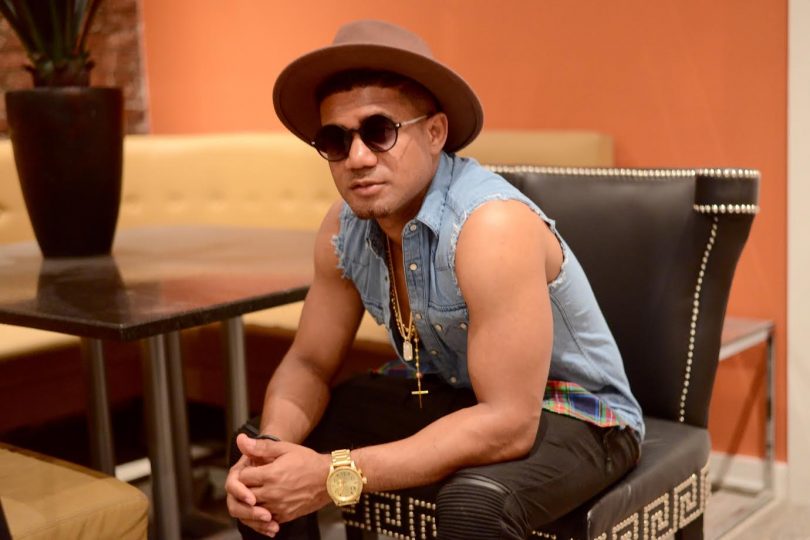 Music bridges people around the world. No matter one’s place of birth, economic class or skin color, it all evokes a human feeling and K’Coneil’s is no different. Born on the beautiful island of Jamaica, K’Coneil was raised in the village of Granville in Montego Bay. It was there amid family and friends that at an early age he was indoctrinated in music by singing in the church at the urging of his beloved grandmother.

Coming from a musical family, music was embedded in his DNA, but not to be stereotyped, education played a major importance in the young artist life. At the age of 16 he migrated to the United States on a full soccer scholarship where he attained his Bachelor’s Degree in Finance. But there was no denying his musical calling, and while in college, K’Coneil joined up with a group which went on to win a singing contest at the prestigious Madison Square Garden.
After the group was dissolved, K’Coneil continued to hone his musical craft by writing and voicing for notable producers. His early singles, “GYAL A YOU” and “ME ONE,” have received heavy rotation on various worldwide airwaves, while has allowed him to grace stages alongside some of the biggest names in music.

A vocalist influenced by his reggae roots and the musical melting pot of his urban surroundings in New York City, K’Coneil sounds admittedly, doesn’t classify by the industry standards. Rather than to be boxed, K’Coneil created his own lane of sonic perfection, which can only be classified as being “genre fluid,” by comfortably fusing rhythms, genres and sounds from Reggae, Dancehall, R&B and Pop.

“As a blend of Sean Paul and Usher, I see K’Coneil as the promissory voice of the future. His dancehall flavor mixed with the pop yet edgy appeal is one that makes you want to dig a little deep and hear more” says billboard recording producer Seanizzle.
On June 24th, 2016 K’Coneil released his debut “Love/Lust” EP which peaked at #10 on the reggae iTunes album charts, and charting on billboard. Among the hit filled EP, the lead single “Hot Like You” and follow up “Feel So Right” have been blazing the airwaves of major stations worldwide.
“Arriving as the boundaries between dancehall and pop are blurring more than ever before, K’Coneil brings a fresh new voice to the scene that’s right on time with the current moment.” – LargeUp.com

Q. Tell us about your background and connection to Jamaica?
I was born and raised in Montego Bay, Jamaica. My Mom and Dad, and my immediate family, three uncles and my grandma are all from Jamaica. I also went to Cornwall College, where I played soccer for the school up until graduation and migrated to NY for college. So I’m still heavily connected to the Island and its culture. I visit at least twice a year both for my music and personal pleasure. I have a lot of fond memories of growing up in Jamaica, and those memories have impacted my overall approach to anything that I attempt. It really makes me seek to put my all my efforts into anything that I do, Just realizing that I am so fortunate to have opportunities that some of the people I grew up with may not have on the Island. Like we say, “can’t waste time- a work we a work, a no chicken mi a jerk,” For the non-fluent, I’m seeking to take full advantage of every opportunity that I’m afforded.

Q. How did you get started in the entertainment industry?
I started singing in church at around four years old. My grandma being the matriarch of the family had my uncles singing in church and it wasn’t before long before I just fell right in line with the family tradition. There wasn’t much TV or video games for me. Listening to the radio, learning and mimicking the songs I heard at the time became not only my favorite pastime, but also my early formal vocal training. I fell in love with the attention and the reaction I got from the audience in church and my female peers around the neighborhood. I continued singing even in college where I became a member of a short-lived male quartet and we won a singing contest at the prestigious Madison Square Gardens. That experience gave me the confidence to move forward with music as a career and even when the group disbanded I trekked on performing whenever I got a chance. It wasn’t until 8 years ago, however when some friends of mine took me to a recording studio and I recorded my first song that I felt the transformation to being considered a recording artist.

Q. How would you describe your sound?
My sound is really a mash up of my many influences. Its really a master piece of Genre-Fluidity and can be described as me floating in between and borrowing from different genres to create sonic perfections that resonates with the audience. It is super fresh because it harnesses the elements of Reggae from the land of my birth, fused with soulful melodies that are further punctuated with lyrics from the grit and hardness that I have come to embrace living in New York City over the last thirteen years. My recently released EP, LOVE/LUST is the true personification of those elements. From the first single “Hot Like You,” produced by Seannizle, which is an Ode to the nineties dancehall era, to the R&B tinged urban tale of Love tryst, in “Loving You Right,’ there is a cache of songs that I couldn’t be anymore proud of to announce my sound to the world.

Q. Tell us about your song “Feel So Right”? Did you write the song? What was your inspiration to write the song?
The song was actually written in New York City by Myself , Wildfire Music, and DJ Calli B, who also produced the record. I’ve known Calli B for years as a DJ/Producer and he was always saying he liked my sound and was gonna cook up the right song for me. He called me one day to the studio with much urgency and played me an unfinished version of Feel So Right. I knew instantly this song had the potential to being a hit. I wrote my verse and we recorded the same week and the rest is history!

Q. We love the video for “Feel So Right”. Especially including the Jamaican flag at the end. Is this your first music video and what was the experience?
This is actually my fifth music video released since 2013, so I really enjoy doing videos as you can tell, lol. Adding the Jamaican flag at the end was something I knew I wanted from the moment we started to discuss the video concept. I wanted to make sure that people knew that I was proud to be Jamaican. My ethnic features often gets me mistaken for Latin or some other Islander, and I was hoping that this would clear up any misconceptions of that. Brand Jamaica is cool and like a little spice in a good pot of jerk, the flag really cemented the cool points to the video. The funny thing about that scene is that while shooting, we forgot to shoot it, wrapped the shoot and were packing up. I remembered and insisted on the shot. The director gave me the crazy eye, lol, but we unpacked, got the shot and everyone is glad that we did. It really makes for a perfect ending.

Q. You have a few singles out there. When can we expect your album to be released?
Well I recently released my EP LOVELUST, which is now on iTunes, and all digital stores. I also have some physical CD’s along with some merchandise available on my website, www.Kconeilmusic.com. I am currently focused on getting the awareness out on this release so the world can hear it. I feel people just need to listen and they will like the music. Check it out on Spotify or your favorite streaming service if you are skeptical about buying something you haven’t heard. However, I am always in the studio recording and have already began recording for the album, As far as a release date, we will just have to wait and see how things play out in the months to come but I am aiming to have an album out next year sometime.

Q. Do you remember the first time you ever got on a stage to perform? Where was it and what did it feel like?
First time I got on stage to perform was at a concert in Mt Salem, Montego Bay. My uncles had a group and they had a song they featured me in so this was supposed to be my first big appearance performing the song. When they called me on stage and I walked out to what looked like 5000 people in the auditorium. It was so exciting as well as nerve racking, if you can imagine how a 5 year old would feel. But when I started to sing, the crowd erupted. It felt like I was in heaven. I fell in love with that feeling and adoration and wanted more of it!

Q. What projects are you working on right now?
Currently just in the studio recording for the album while focusing on promoting the latest single, Feel So Right from my LOVE/LUST EP. I’m doing some promotional shows and my team is working on me doing some touring as an opening act to introduce my sound to as massive an audience I can.

Q. I know it is early in your career but what is your proudest moment so far?
My proudest moment thus far is definitely my LOVE/LUST EP debuting number 20 on the Billboard Reggae chart and number 10 on the iTunes Reggae Album sales chart. That is a great accomplishment for any artist yet alone one putting out his first body of work. This welcoming reception from the public makes me feel very warm and proud inside. I would like to send a big thank you to my team of for all the hard work that they’ve put into helping me create and making this EP a success. From the co-writers, producers, publicity and marketing team, as well as my management I send my gratitude. I am very humbled by the support of the fans that allowed me to accomplish those numbers.

Q. If you were stuck on a deserted island and given the choice of 2 albums which artist would it be?
That’s a very tough one! Can I make it 3 albums? Lol… If i must pic 2 then it would have to be R Kelly; that’s the album with I can’t sleep baby and jay z black ulbum I played those like they were going out of style so Imma go with that lol.

Q. My favorite guilty pleasure is…
Cadbury chocolate with fruit and nuts, lol. I know it’s not good for me but I can’t help it. I have to have it ever so often. Please don’t tell my trainer, lol.

Q. The book, movie or song that changed your life?
Wow that deep… Honestly I don’t think that has happened to be yet. God has been good to me that he gave me a very supportive family that instilled hardwork and determination from an early age so I have always been focused and driven. I’m not a big reader and I don’t watch a lot of movies; music I listen to all day but I terms of a life changing experience I don’t think I have experienced that yet.